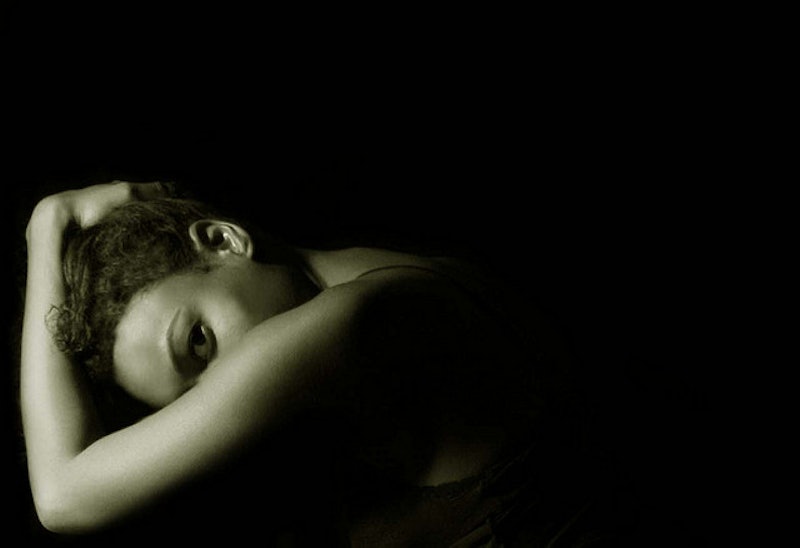 Even though one in 20 Americans will be diagnosed and treated for a panic disorder, most of us have very little idea of what to do when someone around us has a panic attack. There are no elementary school preparedness workshops or "Stop, Drop, Roll"-style posters about how to handle a friend's panic attack — even though the Anxiety And Depression Association Of America pegs the current number of American adults suffering from some form of anxiety disorder at a staggering 40 million. And since women are twice as likely to suffer from panic attacks than men — and more likely to be family caretakers —understanding panic attack preparedness is an issue particularly relevant to ladies. But if you encountered someone having a panic attack tomorrow, would you know what to do?

Panic attacks and anxiety attacks, while often referred to interchangeably, are not the same thing. Panic attacks are when a person experiences a sudden triggering of their fight-or-flight response, which results in heart palpitations, dizziness, distress, numbness and chest pain. Anxiety attacks last for much longer — from days to months — and include longer-term side effects like fatigue, restlessness, muscle tension and disturbed sleep.

My dude occasionally gets panic attacks — they run in his family — and we've had to work together, not only to get to the root of his problem, but also to figure out action plans that help him feel better and also don't unnecessarily freak out bystanders. (Waitress in the burger joint the other day who witnessed by boyfriend's attack: I'm sorry, and I hope you enjoyed the tip.) Here are some tips for coping with a loved one's panic attacks, both in the moment and in the time afterwards.

The person experiencing the panic attack is in the grip of what's called a fight-or-flight response. Typically, fight-or-flight is triggered in the brain when a person comes in contact with a threat to their life. In combat or other genuinely threatening situations, fight-or-flight can be very useful and ups chances for survival (it increases blood flow to the heart and lungs, tenses the muscles, and gives us tunnel vision to allow us to focus and make quick decisions).

But when the fight-or-flight response is triggered by a circumstance that isn't actually dangerous, it still makes the sufferer feel the same way that they would were they in mortal danger. It can even make them feel like they're dying. But they aren't. It's OK. Calm your own breathing, and retain your composure.

The brain's fight-or-flight response restricts its ability to grasp and understand complex language and thoughts. It's so focused on either running from or lashing out at the perceived threat that long, reasoned arguments won't have much effect. Keep your words and thoughts very simple.

3. Encourage Them To Focus On Breathing

Bodies in the midst of a fight-or-flight response are under a higher level of stress, and will take in extra oxygen because of it. This is why the symptoms of a panic attack often include dizziness and hyperventilation — side effects of taking in too much oxygen. So getting a person in the midst of an attack to focus on their breathing — deep in, deep out, regular and slow — is one of the best things you can do for them. Giving them water, bringing them to an area with better air access, and fanning them to get air on their face will also help.

4. Don't Tell Them They're Being Stupid

Telling a person who is having a panic attack that they're being stupid, irrational, looking for attention, or getting worked up over nothing is not going to help them. They may not really hear you, first of all. And secondly, panic attacks are both very real and often entirely unexpected. They have not yet been fully explained by science — studies indicate that panic attack causes may include anything from genetic predisposition to sensitivity to carbon dioxide — but blaming a person for a panic attack is like blaming a dress when a button falls off. So keep any judgments to yourself.

The body scan is a technique drawn from mindfulness meditation, a practice that emphasizes "being in the moment" — which can be seriously helpful for panic attack sufferers. During a body scan, the speaker asks the listener to focus on every individual part of their body, from toes to head, one part at a time. By gently asking them to experience the weight of every body part, you may be able to help the person having the panic attack calm down. Since a major side effect of panic attacks can be experiencing a sense of unreality, being brought "back into" the body, with emphasis on deep breathing, can be a helpful way to calm down.

6. Emphasize That They're Safe

Fight-or-flight responses are triggered by a sense of severe threat. One of the most important things you can do for the person suffering a panic attack is reassure them that they're safe. This can be done physically, by moving them to a quiet, secure place where there isn't any external stimulus, or via soothing verbal reassurance.

7. Use Hand And Head Massages

Studies have shown that hand massages can often calm anxious people down; doctors have used it on anxious patients during cataract surgery, and on hospice residents with terminal cancer. Head massages have their own scientific background, too — they've been used to relieve anxiety in chemo patients and people suffering from workplace, pregnancy or ageing-related stress. Lesson? Laying on hands and giving some part of the body a gentle massage will definitely have therapeutic value for someone suffering through an attack.

This may sound completely loopy (call me a quartz-hoarding tarot-reader if you like), but the science backs it up: numerous studies show that a vial of lavender or citrus essential oil has a calming effect on the anxious. Silexan, a lavender oil tablet, has been shown to be just as effective as anti-anxiety medication lorazepam for calming people with general anxiety disorder so this isn't just New Age snake-oil merchant talk. Carry lavender oil with you if you have a partner or friend prone to panic attacks.

9. Ask Them What They Need

Do not assume that people in the grip of anxiety attacks can't be rational. Listen to what they say about what they need, what might help them, and where they'd like to be. If they've had panic attacks before, a suffererer may have an action plan in place that you can help them execute (by getting them water or helping them with medication).

1. Learn About Panic Attacks And Their Symptoms

One of the best ways you can help a panic attack sufferer is not relying on them to explain the whole damn thing to you. Do your homework. Learn as much as you can about panic attacks in general, and your friend's attacks specifically (if they're open to talking about it). And don't stigmatize the attacks, or insist on talking about them endlessly. The person is not their panic attacks.

2. Plan Your Time Together Intelligently

If panic attacks are a frequent thing in your friend's life, you need to knowledge this while planning time together, and be sensitive to it. If you're able to, have a casual conversation about what they think sets them off, and avoid that stuff. Don't act all pissy because they can't go to a club because it might trigger an attack, either. It's not their fault.

Here's the good news: panic attacks and generalized anxiety disorder are totally treatable. Options from cognitive behavioural therapy to SSRI tablets have been shown to help. But, according to the ADAA, only one-third of the people suffering from panic or anxiety disorders actually seek help. Emphasizing that you think treatment is a good idea might be the encouragement your friend needs to actually go seek help.

There are lifestyle choices that can help panic attack sufferers, and encouraging your friend to engage in them can be helpful. Exercise can offer stress relief, as can healthy eating, reducing alcohol intake and cutting down on caffeine. Seeking out more social situations and giving up smoking have also been shown to help out people with generalized anxiety disorder. Help them by joining in their new healthier ways of living — hey, you could probably use more omega-3s, too.

5. Have An Action Plan

What will you do if your friend has a panic attack around you? Knowing what your friend wants you to do ahead of time will help make things a lot easier when it does happen.

You've offered your friend so much good advice and help, and they still aren't fixed! Tough luck. Anxiety disorders are complicated, and things can seem like they're stalling no matter how much positive work you do. It's a long journey — so don't direct frustration at your friend if the panic attacks keep happening unexpectedly. Go blow off some steam somewhere else, and then suck it up.