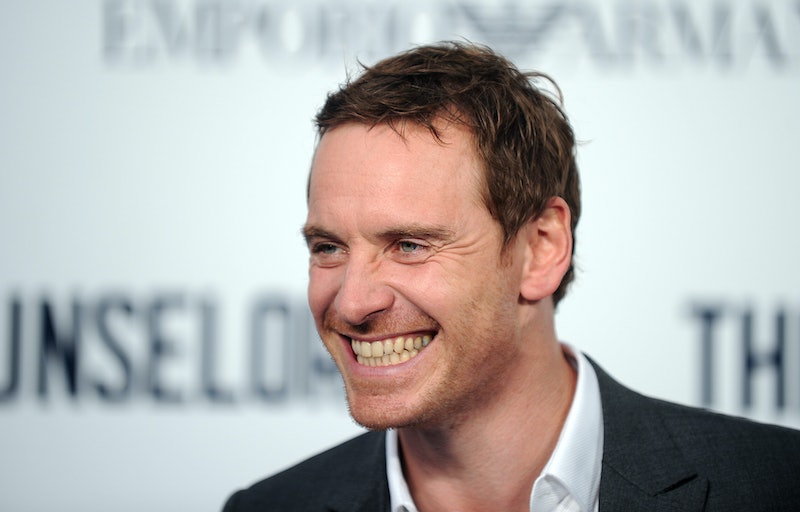 Even if The Counselor didn't have the incredible draw of Cormac McCarthy's famously dark writing, the direction of the always intriguing Ridley Scott, and a scene in which Cameron Diaz finds love in an automotive place, it would bring us to the theater with one inescapable draw: the magnetic (and by "magnetic" we mean "so sexy just thinking about him melts my brain") Michael Fassbender.

And with a leading man so intoxicating, we're automatically inclined to fantasize about all the wonderful things we could do with Michael Fassbender in our presence. There's not a single thing about him that doesn't inspire absolute starry-eyed daydreams. We're all absolutely sure that our lives would be sugar cubes and toothy grins with Fassbender in our general vicinity. But if you haven't yet hopped on the Fassbender train, here's all the things we want to do with Mr. Fassbender. Get ready, because once you hop on, you are not going to want to hop off.

1. Discuss Jane Eyre in a Room Filled With Many Leather-Bound Books

I'm sorry, did you think these were all going to be activities for his littler Fassbender? Sure, it's famous, but we have brains and so does Fassy, which is probably why he made the absolute best Mr. Rochester in the history of Jane Eyre adaptations in 2011's Jane Eyre.

We could just lounge among books, bathed in the soft glow of candlelight while Fassbender waxes poetic on his irresistible and perplexing character for hours. Yes, please tell me where you found inspiration for the dark pools of mystery that are Rochester's brow-shrouded eyes. For some people, this is even better than a torrid spell of the horizontal mambo.

Yes, there will again be soft candlelight. So sue me. Fassbender is the master of candlelit scenes. We could celebrate his Irish heritage by touring Ireland's whiskey offerings. Plus, think about how much we'd learn about each one if her were to deliver the descriptions of each blend in that irresistible, haunting timbre of his.

3. Get Kicked Out of a Party and Give Fassy a Piggyback Ride

Look, I know the tabloids went nutty over this headline, but even the "Fassbender kicked out of his own party" headline couldn't sour us on this statuesque God among men. In fact, if anything, seeing him act so playful and cheery just made me want to join in.

Now, if you'll excuse me, I'll be doing some squats so I can be prepared for the best party of my life. (No one would forgive me if I dropped Michael Fassbender.)

Have you ever noticed the fact that Fassy looks something like a really, really ridiculously sexy shark? There's even a Tumblr dedicated to answering the question: Is Michael Fassbender a Shark? The answer is no (if you're concerned with science, or whatever), but what if, after we drank whiskey and had a little piggyback fun, we took our buzz on over to Sea World to answer the question once and for all?

This won't be better than sex, but after a few whiskies it would be funnier than sex.

Let's face it. This day has been too much fun. Let's take it down a notch for a second.

The other half of Fassbender's heritage comes from Deutschland. His mother hails from Ireland, but his father is German and Fassy was actually born in Heidelberg, Baden-Württemberg, Germany. After all that gardening, your buzz will start to fade, so you'll be plenty ready for something fizzy.

Enact your wildest fan fiction fantasies. For me, the above activities will suffice, but I guess this is where it's all headed. Pervs.