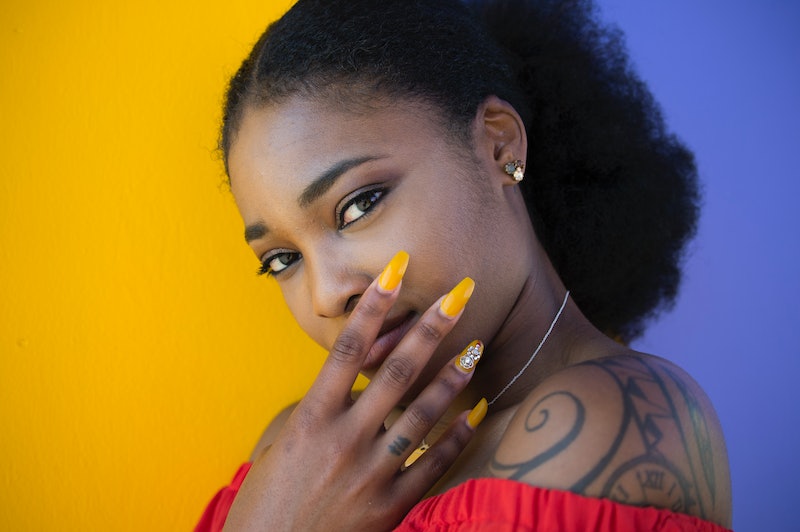 We're all taught specific skills in school that are meant to help us get ahead in life — the three R's and whatnot — but are there some things school doesn't teach us that we could all still stand to learn? In a word, yes... and in a few more, yes, and those things involve emotional intelligence. But before we learn the skills associated with emotional intelligence, how do we find out what our emotional IQs are in the first place? Good news: If there's one thing the Internet excels at, it's tests and quizzes, so read on to find out more.

First things first: What actually is an emotional IQ? According to Psychology Today, the term “emotional IQ” or “emotional intelligence” refers to our ability to perceive and empathize with the emotions of others — so basically, it's how well you can read people combined with how you respond to them once you've read them. Lifehacker also notes that being able to manage your own emotions plays heavily into how high of an emotional intelligence you have, as well. As Lifehacker also details, the study of emotional intelligence is fairly recent; there are a few different models out there, all of which have their own tests to assess how you measure up. The skills usually demonstrated by people high in emotional intelligence include conflict management and resolution, the ability to keep your own emotions in check and prevent them from impeding your daily life, and so on. In short, people with high emotional IQs are adept at navigating complex social situations, which results in a number of additional benefits — from better work performance to stronger interpersonal relationships.

So how do you figure out how high or low your emotional IQ is? That's where it starts to get a little tricky. A lot of the assessment tools out there — the Emotional and Social Competency Inventory (ESCI), the Mayer-Salovey-Caruso Emotional Intelligence Test (MSCEIT), and so on — are hard to get your hands on if you're not a psychologist (not unlike the PCL-R psychopathy inventory). But one test that is readily available to both scientists and laypeople is one that assesses one of the clearest indications of how well you can read other people: The Reading the Mind in the Eyes test.

First developed by Professor Simon Baron-Cohen at the University of Cambridge (fun fact: Simon Baron-Cohen is Sacha Baron Cohen's cousin) and published in 1997, the Reading the Mind in the Eyes test does pretty much what it says on the label: It measures how well you're able to determine what's going on in someone's head by what you see in their eyes. If you can look at a pair of eyes with no other context provided and tell what emotion the person those ideas belong to might be experiencing, congratulations — that means you've probably got a pretty high emotional IQ. After determining that the original test suffered from some psychometric problems — for example, offering only two possible answers for each question, which put a great deal of the results in the hands of chance — Baron-Cohen and his colleagues revised it, and in 2001, they published a newer version.

As the Sydney Morning Herald points out, though, so many of us spend so much more of our time looking at computers, tablets, phones, and other digital screens than we do looking at real people these days that our people-reading skills may have atrophied somewhat. Whether this means that our overall emotional intelligence has fallen remains to be seen — but studies have shown that there might be a connection. One published in 2014, for example, had one group of sixth-graders abstain from looking at any digital screens for five days, while a second continued to use their electronic devices as usual — and found that those who avoided screens scored markedly better on tests assessing how well they could read human emotions than those who didn't.

So how would someone like me, who both spends most of her time in front of a computer screen and works from home (meaning I don't see a whole lot of people in the flesh on a daily basis), score on the Reading the Mind in the Eyes test? Well, let's find out, shall we? I found an online version of the test implemented by researchers at Harvard University and decided to use myself as a guinea pig for your edification and enjoyment. I'll be honest: I was expecting a terrible score. But I ended up surprising myself, so maybe all is not lost. Here's how it went.

The Reading the Mind in the Eyes test presented me with 37 pictures showing just the eyes on people's faces. Each picture was accompanied by four emotions; my job was to look at the eyes and pick which emotion I thought corresponded to them. The images were all black and white, and I'm pretty sure most of them were celebrities and other famous people — for example, I highly suspect that this pair of eyes (which I labeled as “thoughtful”) belonged to Johnny Depp:

Want a few more examples? Happy to oblige. Here are a few more of the eyes I was shown, along with what emotion I thought they depicted:

(Side note: It really bothers me that "skeptical" is misspelled here. Anyone else?)

And so on and so forth. You get the idea. It's a short test; it only took maybe 10 or 15 minutes to complete.

So What Does It Mean and Why Does It Matter?

According to information provided by the creators of this version of the test, there's a link between how well people perform on it and how well they perform on “complex problem solving tasks.” That's comforting; I guess I can rest easy knowing that, as socially awkward as I often feel I am, maybe I'm not that awkward. At least I can usually tell what's going on at any given moment, right? After I've figured that out, I just need to work on responding in an appropriate fashion.

I also wonder, though, if why I'm good at some of the things I'm good at has something to do with how well I can read people. In my other life as a theatre director, for example, my job is not to be able to construct a clearly-told and emotionally impactful story, but also to be able to guide my actors' performances such that this final goal is achieved. Generally I'm pretty good at it — so I wonder if emotional intelligence might be part of the reason why. Or, conversely, am I generally good at reading people because I have that sort of experience under my belt? We're left with something of a chicken-or-the-egg question, and while I'm not totally sure more research would be able to satisfactorily answer it, I'd be interested in seeing further studies explore the issue.

Head here to take the Reading the Mind in the Eyes test yourself — and if you want to boost your emotional intelligence, you might check out Lifehacker's handy guide. Developing better people skills can only be a good thing, right?