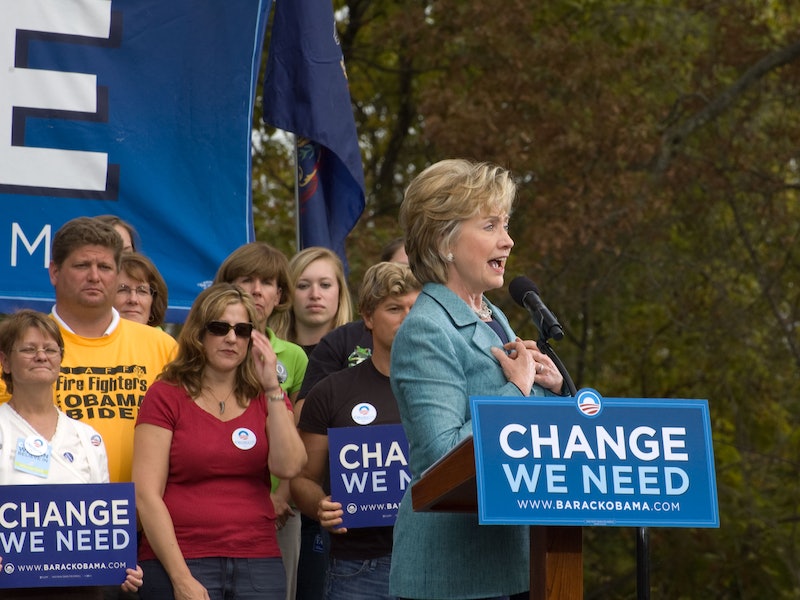 Say what you like about Hillary Rodham Clinton, the woman has got cojones — and either a stellar speechwriter or a flair for felicitous phrasing, or (my guess) both. From casual witty repartee, to craftily candid interviews, to dignified presentations in front of thousands of people, the Democratic presidential hopeful has got it covered, words-wise. So we took some time to dig out a dozen of Hillary Clinton’s most motivational quotes.

To be fair, Clinton has long needed to use words to her advantage. The life of the former first lady and secretary of state has been replete with overwhelming public pressure. And it has not been free from controversy. Clinton is known for her somewhat adversarial approach to the media, an attitude critiqued and cataloged in The New Yorker last year. And yet, despite her slightly embattled approach and her natural desire for privacy, the world yearns for Clinton comments — and she can knock it out of the park.

One subject she is particularly eloquent on — and that she had recourse to often during her years as first lady — is the state of women’s rights. In 1995, the fourth United Nations World Conference on Women was held in Beijing. Clinton, as wife of then-president Bill Clinton, gave remarks to the assembled dignitaries.

Clinton delivered an impassioned celebration of women and a denunciation of their too-frequent marginalization. “As an American,” she said, “I want to speak for those women in my own country, women who are raising children on the minimum wage, women who can’t afford health care or child care, women whose lives are threatened by violence, including violence in their own homes.” She continued:

We need to understand there is no one formula for how women should lead our lives. That is why we must respect the choices that each woman makes for herself and her family. Every woman deserves the chance to realize her own God-given potential. But we must recognize that women will never gain full dignity until their human rights are respected and protected.

Rounding up, she drove her point home:

And Hillary, at least, was heard. Let’s take that moment — in 1995, to a conference that would eventually establish the progressive Beijing Platform for Action, a landmark moment in the history of the fight for gender equality and women’s empowerment — as a gold standard, and see what else Clinton has got.

1. On her decision to be a badass politician, instead of a housewife

I suppose I could have stayed home and baked cookies and had teas, but what I decided to do was to fulfill my profession, which I entered before my husband was in public life.

Don't confuse having a career with having a life.

3. On staying upbeat when there doesn’t seem a reason to be chirpy

There is a sense that things, if you keep positive and optimistic about what can be done, do work out.

4. And just to prove that she can practice what she preaches — on the occasion of the suspension of her candidacy in the 2008 primaries

Although we weren't able to shatter that highest, hardest glass ceiling this time, thanks to you, it's got about 18 million cracks in it and the light is shining through like never before, filling us all with the hope and the sure knowledge that the path will be a little easier next time.

5. On how to take criticism (because if anyone’s an expert at rolling with the punches, it’s Hillary)

Take criticism seriously, but not personally. If there is truth or merit in the criticism, try to learn from it. Otherwise, let it roll right off you.

6. On how to get over disappointments and come out stronger

You know, everybody has setbacks in their life, and everybody falls short of whatever goals they might set for themselves. That's part of living and coming to terms with who you are as a person.

7. And spreading the good vibes around

We should remember that just as a positive outlook on life can promote good health, so can everyday acts of kindness.

8. On how to take the path to the moral high ground

Dignity does not come from avenging insults, especially from violence that can never be justified. It comes from taking responsibility and advancing our common humanity.

Every moment wasted looking back, keeps us from moving forward. … In this world and the world of tomorrow, we must go forward together or not at all.

10. On laughing off sexism

If I want to knock a story off the front page, I just change my hairstyle.

11. And a solid roundup of all of the above

Always aim high, work hard, and care deeply about what you believe in. And, when you stumble, keep faith. And, when you’re knocked down, get right back up and never listen to anyone who says you can’t or shouldn’t go on.