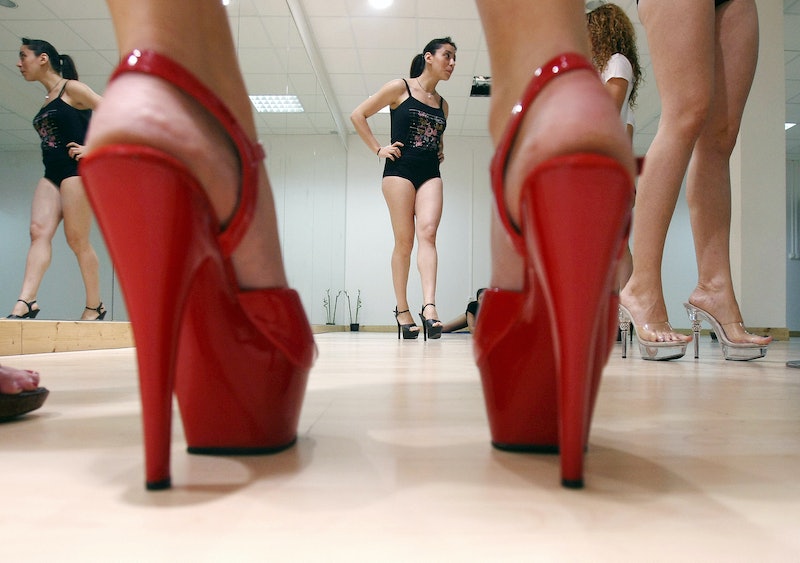 I think it’s safe to say that most of us have imagined our own funerals at some point or another. We've wondered what it would be like, who would be there, and whether it would include a message from the president, declaring our death at the ripe, old age of 135 to be "a tragic loss for the nation, the world, and the United Federation of Planets at large." I doubt, however, that many of us have imagined a send off that would include scantily clad women gyrating around our coffins. That’s exactly what happened at a funeral in Taiwan on April 12; a deceased man’s own wife hired exotic dancers to perform at his funeral.

Video taken by funeral attendees shows two women, wearing underwear and thigh-high boots, dancing to Maroon 5’s “Moves Like Jagger” under neon lights next to the coffin of the deceased (who was identified by the Daily Mail simply as “Mr. Jian”). According to the Daily Mail, Mrs. Jian, a devoted wife, “said she knew her spouse always had an eye for the ladies and wanted to ensure that his final journey was one that he would appreciate.”

Mrs. Jian’s actions are not particularly unusual in Taiwan: “Funeral strippers” have been practicing in the region since at least the early 1980s. They arrive in an Electric Flower Car (EFC), a platform covered in neon lights, from which they can perform; it’s not unusual for the performances to include singers and other musicians in addition to the strippers. In 2011, Marc L. Moskowitz, an anthropologist at the University of South Carolina, made a documentary, Dancing for the Dead: Funeral Strippers in Taiwan, that investigates the nature of exotic dancing at funerals. In an interview with io9, Moskowitz explains that these funeral strip teases are more common in rural parts of Taiwan than in urban settings, where such displays are generally considered inappropriate and are associated with the working classes.

Moskowitz tells io9 that the origins of the EFCs aren’t entirely clear, describing,

[P]eople's explanations for why people hired Electric Car Performers varied tremendously. One person I interviewed told me that it was because a new ghost would get picked on by older ghosts so the performance was to distract the older ghosts to give the newer ghost time to get used to his environment without being harassed. Other people told me that the lower gods liked this kind of entertainment so that it was for them. Yet others said that the deceased liked that kind of activity when living so they wanted to send him off in style.

He also suggests that the popularity of funeral strippers in rural Taiwan has to do with people’s limited access to live entertainment, saying,

It seems to me that part of what is going on here is that in urban centers most people can afford to pay for entertainment but in poorer areas a concert ticket or even a movie ticket is outside of most people's budgets. The Electric Flower Car performances, and temple events more generally, are the only chance many of these people get for live entertainment.

To find out more about the Electric Flower Car performances, check out Moskowitz’s documentary website.

More like this
Are Sagittarius & Sagittarius A Good Match? Astrologers Weigh In
By Kristine Fellizar
10 Thanksgiving Alternatives You Can Celebrate This Month
By Katie Mitchell
Here’s How To Find Your Apple Music Replay For 2022
By Melanie Mignucci
Jennifer Lopez Shares Rare Holiday Photos Of Ben Affleck & Her Twins
By Radhika Menon
Get Even More From Bustle — Sign Up For The Newsletter