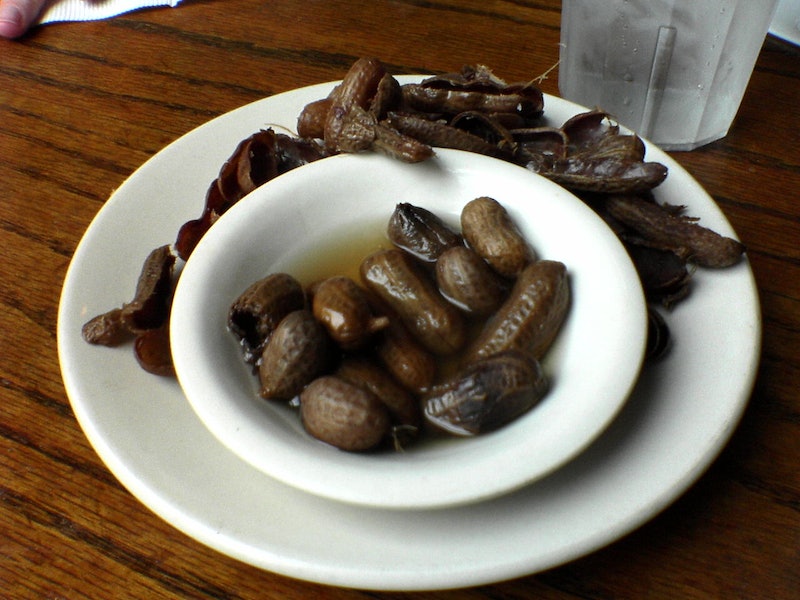 You always hear about the connection to between smell and memory, and how memories can be powerfully triggered by certain smells that our brains have associated them with. This is part of why I will throw away my guy friends' deodorants and buy them new ones if they happen to wear the same kind as a rotten ex of mine. It's also why the scent of pencil shavings may give someone anxiety if they link that smell with the tension of standardized tests. Which isn't to say that scent can be tied only to terrible memories involving crappy exes or multiple-choice exams. It's seriously the best when you catch a whiff of something immediately zaps your brain to an especially unique, golden memory. Some of these smells are specific to certain places. I grew up in the South, so smells native to that area have a profound impact on my personal memory triggers.

Passing aromas of boiling, salted green peanuts may have zero impact on anyone raised in some places, but me? I try not to completely stop walking. And if I'm ever rolling with another person who was raised in the South — whether or not we knew each other — I know for a fact we'd both have similar feels surface just because the familiar sniff of peanutty brine. It's weird, absolutely, but each little pocket of The U.S. has their own particular collection of scents. It's pretty cool, actually. Anyway, here are some smells that remind you of growing up in the South:

Nothing like a woman on the train rocking a magnolia-based perfume to shoot you back in time to scrambling up these majestic, towering trees as a wee one.

Yankees don't trust boiled peanuts but that's OK; more for us. Many complain it's too weird that we're down to eat stuff brewed in an old beer keg we bought literally on the side of the road. They'll never get the way that hot, salty smell makes our mouths drool and our feet ache for direct contact with grass.

It's a subtle spritz involving all things fresh: mint, sugar, bourbon. We definitely remember older relatives swilling high ball glasses (or more likely, Mason jars) full of the elixir while sitting with us barefoot on the porch during a thunderstorm. We only order these now when feeling extra nostalgic (not because they aren't always delicious, but they're a pain in the ass to make and we don't hate bartenders that much).

Sometimes our city pals wanna journey into the woods to get all ~one with nature~. Beforehand, they douse themselves in insect repellent, but all we can think about is sprinting on our bikes from mosquito trucks every summer. Ugh, those coughs.

Unlike boiled peanuts, you won't meet many people, regardless of origin, who aren't immediate fans of fried chicken. Even if you don't immediately know what you're huffing, your mouth waters. But we Southerners get called back to memories of family picnics in which at least two folks would bring the good, homemade stuff.

Plus, it means you get a fresh start with your cul-de-sac chalk mural.

The weird funk of low-tide

It's a mixture of different algae, critters, and, well, the ocean. When the sea scoops itself back out, exposing a new, wet expanse of sand, it smells... kinda funky. People who didn't grow up with it might find it offensive, which I totally get. But those of us grown-Southern accept it as a totally daily occurrence and possibly a good opportunity to go cochina pickin'.

A bunch of cheeses blended together into a heavenly spread that adds class to literally anything. It smells a bit tangy, a bit creamy, and like we can't wait to dip pretzel sticks into it so then we can stick those sticks between knuckles like little weirdo pimento Wolverine claws, clearly. (OK, maybe that was just me and my sister.)

Popping the backs off these with your own teeth so you could slurp up the nectar inside was a practiced art. Now honeysuckle shows up as a base scent in a bunch of fragrances and it's sure to attract some Southern-raised people.

You considered it a major home run if you talked your mom into getting this stuff over that horrible, oily, thick stuff. It's got way less of the slick, and way less of the sniff. But you know that subtlety and love it accordingly.