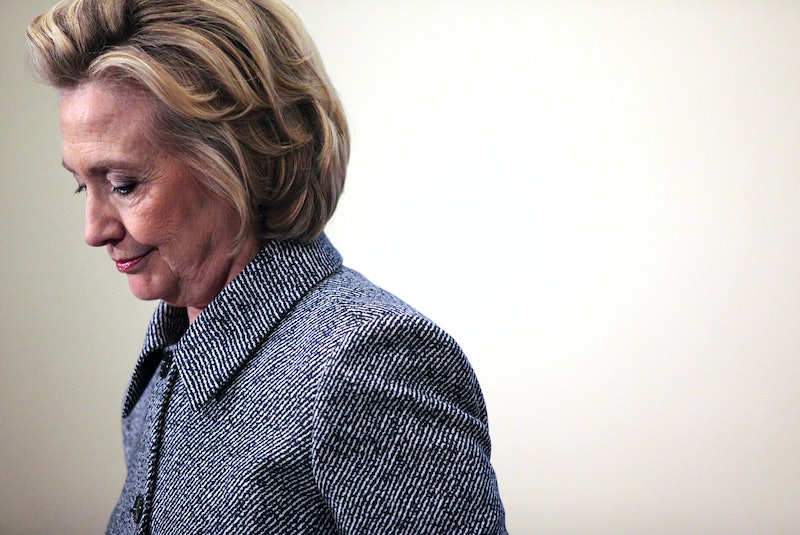 She may have only just officially launched her presidential campaign, but already Hillary Clinton faces questions about her same-sex marriage stance. In 2008, as The Atlantic points out, Clinton ran for president while openly opposing gay marriage. Then, in 2014 — once the tide in America had turned in favor of marriage equality — she gave a combative interview claiming she had since reversed her stance, but considered marriage best left to the states. On Wednesday, she updated her position yet again, this time stipulating that marriage should be a constitutional right for same-sex couples — effectively urging the Supreme Court to rule in favor of marriage equality. But will all this chopping-and-changing damage her chances? And should it?

The updated position comes after a BuzzFeed article on the Supreme Court’s imminent deliberations whether or not to strike down marriage bans reported that Clinton had yet to provide the publication with a statement on her stance. Swiftly, Clinton’s campaign staff responded. “Hillary Clinton supports marriage equality and hopes the Supreme Court will come down on the side of same-sex couples being guaranteed that constitutional right,” Hillary for America spokesperson Adrienne Elrod said Wednesday.

The quick move demonstrates that Clinton is at least cognizant of the dominant mood among her potential voters, as the issue of gay marriage comes before the country’s highest court. President Obama, who also “evolved” on the issue of gay marriage after coming into office, is urging the Supreme Court to rule in favor of making “marriage equality a reality for all Americans.” But Clinton’s flexibility on the matter — her shrugging off of an attitude now held to be utterly bigoted by many — has the potential to evolve into a political weakness now she’s on the campaign trail. So will it?

Clinton is the only Democratic candidate so far to have announced her intention to run for president — but as Talking Points Memo points out, one of her possible opponents, Martin O’Malley, is already broadcasting his attempts to legalize gay marriage in Maryland. Nevertheless, Clinton is convincingly leading O’Malley in early polling. Meanwhile, her Republican rivals — among them Florida Sen. Marco Rubio and Kentucky Sen. Rand Paul — are a year behind Clinton, claiming they support allowing states to decide on the matter.

Conor Friedersdorf, writing in The Atlantic last year, opined that though the change in position could render Clinton vulnerable, it was unlikely to damage her in a contest with Republican competition, “given that her coalition is so much stronger on gay rights than the opposition.” He continues:

There's a strong argument to be made that Clinton's anti-gay-marriage past shouldn't drive decisions to support or oppose her. No one doubts she will be a strong supporter of gay equality if elected president, now that all the political incentives to take that position are aligned.

But that doesn’t mean that she won’t face scrutiny. And how she deals with that scrutiny will be instructive. In an article responding to Clinton’s irritable exchange on the matter on NPR last year, Andrew Sullivan points out the numerous blows to gay rights made during Bill Clinton’s term in office (including, for example, the signing of The Defense of Marriage Act), with Clinton’s full support. Taking that into account, Sullivan writes, “What I’d like to hear her answer is whether she regrets that period and whether she will ever take responsibility for it.” He ends on a slightly bitter note:

As long as marriage equality hurt the Democrats, [the Clintons] were against it. Now it may even hurt Republicans, they’re for it. So Hillary is for it now. We’ve just got to hope the polling stays strong.

Whatever her personal stance, Clinton has clearly now made a choice to stand by marriage equality. But she’s hardly an unflinching gay rights champion. And how she deals with criticism on this front will be interesting — even if it has no immediate effect on her polling, as Friedersdorf suspects. A Slate article suggests that the reason she hasn’t yet fully taken responsibility for her developing approach comes down to “baggage and egos” — an abundance of things in the past to apologize for, and little desire to dredge them all back up. But as Slate points out, other politicians (like Joe Biden) have energetically embraced the gay marriage project in a much more convincing manner. Clinton, it seems, will need to find a strong narrative for the change of heart and stick to it fervently if she’s to emerge looking good.

And yet, in a bleak playing field, surrounded by Republicans and unconvincing potential Democratic challengers, it seems unlikely that this will crucially damage Clinton’s campaign. Barney Frank, retired congressman, author (recently) of Frank: A Life in Politics from the Great Society to Same-Sex Marriage, and generally considered America's most prominent gay politician, clearly has not been put off. Frank enthusiastically endorsed Clinton’s run Sunday, while suggesting that Republicans were behind on the gay marriage issue.

Jonathan Capehart, writing last year post-NPR scandal, suggested that in fact Clinton’s record on the issue was nothing to be ashamed of. “In fact,” he wrote:

Her shifting positions reflect the personal evolution millions of Americans have made and continue to make with incredible speed on marriage equality. They just don’t have to do it in the crucible of presidential politics or live on the radio.

But presidential candidates do have to sound plausible and dependable, and they have to do it multiple times a day, to satisfy the nation and the world. It would be in Clinton’s best interests, one suspects, to speak on the matter herself — not via a campaign lackey — frankly and without obfuscation. In doing so, she might turn a political weakness into a strength.