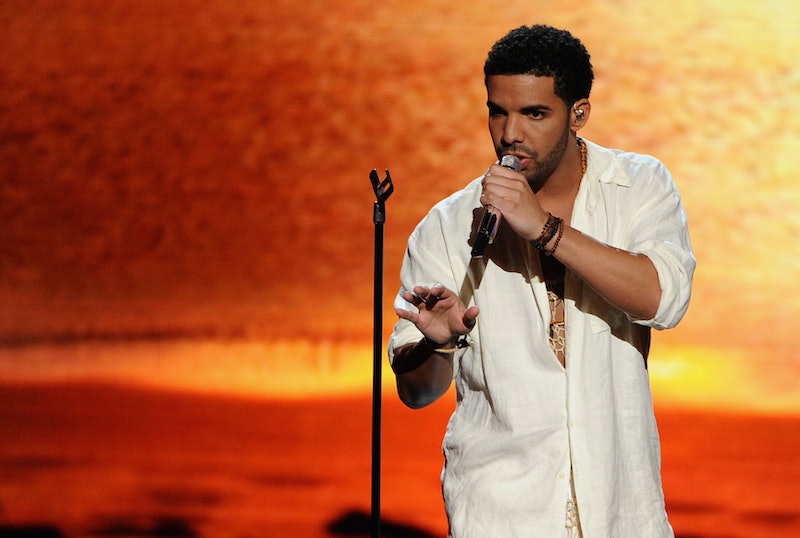 Let's face it: as proven through his songs and lyrics, Drake loves his mother more than anything — even Toronto. He's got a lot of woes about women, but maybe most of all about worrying about Sandi Graham, his Jewish mother who he worships. And why shouldn't he — she's always there for him, always looking out for him, and is in total support of his connections to his emotions. She raised him all by himself, and supported him through tough times — for instance, in 2009, Drake gave one of the saddest interviews ever about the financial and emotional strain his family was going through when he was making So Far Gone: "I don’t wanna get too emotional, but I had to hug her. My father doesn’t stay with us, so I had to be security for her and just let her know that everything is going to be all right."

Drake clearly knows what his mother gave him, rapping about her on a ton of tracks, but especially on "You & The 6" from his surprise album If You're Reading This It's Too Late. It's tremendous. It's emotional. Drake continues to out-Drake himself.

So, in honor of Drake's sweet relationship with his mother, here are some of his sweetest, adorable — but always raw and real — lyrics about and for his mother. Because though Drizzy started from the bottom (literally; he used to live in his mom's basement), he wouldn't be here on the top if it weren't for mother Sandi:

To be honest, the entirety of "You & The 6" will make anyone with a soul cry like a little baby. The whole song is a love letter to his mother, and consists of him apologizing for being a mess and not calling (making her resort to having Google alerts on her phone for him). It's tender and it's perhaps the most Drake we've ever seen Drake, But "that shit saved my life" takes the cake as far as sweetest lyrics go.

"...and it's just words/ And they cut deep/ But it's our world, it's just us two." OMG, Drake and his mom are alone in the world, and their hearts are hurting, and so is mine, now. This is from "Look What You've Done," and always gets me.

"At least I'm always being true to what you taught me"

Another from "You & The 6." Drake supports teachers and damn right, he should!

Another from "Look What You've Done." It seems like Drake will never feel satisfied that he's given his mother back all that he could for raising him — apparently, he wrote this line about an operation that he paid for Sandi to have in 2010. Help me, I am slain, Drake literally saved his mom's life.

"Dedicated to my mom and I swear my word is bond, everything will be okay"

This is from "The Calm." Once again, Drizzy just wants to do right by his mom, even after he's been on his worst behavior. He's doing his best to be better to her every day.

"After helpin' mama out, the shit would disappear"

From "Star67" — as much as Drake's mom supports him, he supports her too.

This one is from "From Time," and it's pretty self-explanatory. Even though Sandi doesn't think that anyone is good enough for her Aubrey (she's probably right), she knows he's gonna need to let those walls down so he can find the right champagne mami.

More like this
Meghan Trainor & Daryl Sabara Are Expecting Their Second Baby
By Jake Viswanath
Adam Levine & Behati Prinsloo Welcome Their Third Child Together
By Jake Viswanath
Hilary Duff's Husband Matthew Koma Has Her Name Tattooed On His Butt
By Jake Viswanath and Stephanie Downs
Mimi Webb’s IRL Situationship Inspired “Red Flags”
By Catharina Cheung
Get Even More From Bustle — Sign Up For The Newsletter
From hair trends to relationship advice, our daily newsletter has everything you need to sound like a person who’s on TikTok, even if you aren’t.