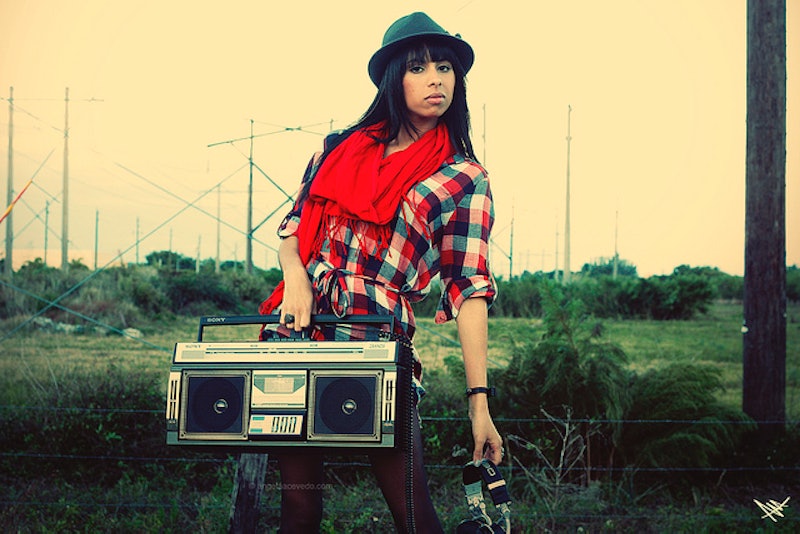 Music affects our mood. Let’s be real. Everyone knows that. Even if you’re having a completely downer day, there’s always that one perky song on the radio that always seems to pull you out of your funk. Whether it be “Uptown Funk”, "Happy", or something of the Taylor Swift variety, music has been proven to influence the mind in ways that we don’t even know. And, even sad music can make you feel better. After all, even science says that certain songs have been proven to up the ante on your workout. So, if amped up music makes you amp up your workout, will sexy music make us sexy? Basically, does music affect your sex drive?

The answer is, yes. Music, whether it's the tone or the song does affect our brains, even when it comes to dating and sex. If you happen to find yourself going through your online dating history thinking, “God, why do I keep talking to these attractive jerks?” than you may need to reevaluate your Spotify playlist. From getting us in the mood to altering how we perceive romantic interests, listening to music can have some crazy effects on our love lives.

Here are the ways:

Robert Zatorre, a professor of neurology and neurosurgery at Montreal Neurological Institute found that your brain releases dopamine, the pleasure hormone, when you’re listening to music. Surprise, surprise, sex too, activates the release of dopamine. Therefore, simple math would conclude that both sex and music get you EXCITED.

2. Music Makes Us More Picky When It Comes To Love Interests

According to a study done by Dr. Francesa Dillman Carpentier, a University of North Carolina professor, music with sexually suggestive lyrics may play a role in how we perceive romantic interests. First, participants were split into two groups. One group listened to sexually provocative music, while the other listened to non-sexual music. Next, participants were shown dating profiles. The study found that people who listened to sexually charged music beforehand judged profiles based on their physical traits than personality.

In a pattern of dating the worst people ever? Maybe you should be listening to more Meghan Trainor, less The Weeknd.

3. Music Makes You Easier To Approach

French researchers conducted an experiment using 18-20 year old females. Broken up into two groups, one group was exposed to music with romantic tones, while the other to more neutral ones. Minutes later, guys who were working the experiment asked women from both groups for their numbers. It was found that the women who were exposed to romantic music were more likely to give out their number as opposed to the women who weren’t.

So, if you’re out at a club or a bar or wherever single people go to meet people that aren’t online, try waiting for those sexy slow jams to hit the speakers before making your approach.

4. Misogynous Song Lyrics Makes Everyone Angry At The Opposite Sex

Listening to sexually aggressive song lyrics may push you to have negative feelings toward the opposite sex, whether you're a man or a woman. In a study conducted by Ludwig Maximilian of the University of Munich, men and women were told to listen to music that contained misogynous song lyrics or neutral lyrics. Researchers found that men who misogynous songs recalled more angry at women and recalled their negative qualities than when they heard neutral song lyrics. And, men-hating song lyrics had a similar effect on how the female participants viewed men.

You've probably heard your fair share of songs that get you in the mood, and you're not alone. But, not everyone gets turned on by the same music, and timing can have a lot to do with it, too.

Y. Mark Hong, MD, a urologist with Arizona Urology Specialists in Phoenix and Scottsdale, told Everyday Health that men low testosterone who want to boost their sex drive should try listening to music.

All in all, the movies seem to have got it right. As science has shown us, using music to set the mood is actually a thing.