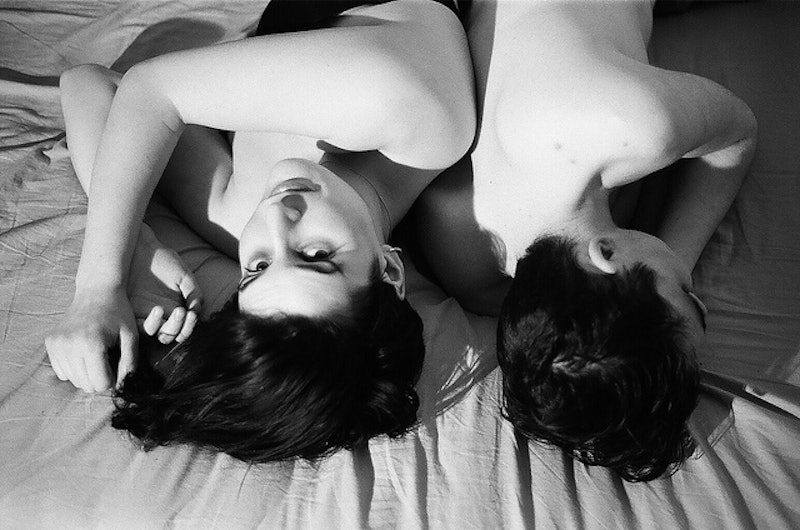 Good sleep is critical to our ability to make decisions, learn, be happy, and generally function in everyday society. Unfortunately, lying next to a snorer or someone with untreated sleep apnea means frequent interruptions in your own sleep. It is also often reported as a major source of relationship problems. But how do you deal with a partner who snores?

A new study found that snoring may cause Alzheimer’s, high blood pressure, stroke, and diabetes. And according to the National Sleep Foundation, snoring is a common problem among all ages and both genders, and it affects about 90 million American men and women — including 37 million on a frequent basis. Over 18 million American adults have obstructive sleep apnea (a disorder that causes frequent interrupted breathing during sleep, and as a result, snoring).

No doubt, snoring and untreated sleep apnea is a pretty yucky thing to deal with, both for the subject and the unwitting sufferer. And it's important to understand the impact it can have on your and your partner's health. But it doesn't have to be all bad: there are options available to help alleviate the irritation and frustration associated with your partner's incessant log-sawing.

So here are five interesting facts to help you better understand sleep apnea and snoring, to help you find options to your partner's "problems in bed".

1. Snoring can lead to hearing loss—for both of you.

Not all snores are created equal. The average snore is about 40 decibels, about the same level of noise you would hear in a library (think consistent whispering and quiet chattering).

But believe it or not: the human snore can roar. In fact, one of Britain’s loudest snorers is a grandmother of four who snores every night at 111.6 decibels. That’s louder than a jackhammer, a subway train, a hand drill, power mower, snowmobile, motorcycle, and a power saw—and just eight decibels lower than the sound produced by a low-flying jet plane.

Research shows that the internal vibration in the inner ear can be high enough to cause damage to the snorer’s own hearing! Perhaps less surprisingly, some bed partners of noisy snorers have been shown to have a substantial incidence of partial deafness in the ear that faces their snoring bedmate.

2. But you may still be better off sleeping next to a snorer (if you love them).

Despite the potential for partial deafness, sharing a bed may actually be better for partners of snorers than sleeping alone. Wait...come again?

Yup: research from 2012 shows that sleeping next to someone can help lower the stress hormone cortisol, perhaps because it encourages feelings of safety and security. And providing you are happy in the relationship, sharing a bed with your partner can also boost levels of the "love hormone" oxytocin, which scientists say can induce bonding feelings.

3. That said, you may still want to sleep separately. Like, really separately.

If you really can’t stand the noise of your partner’s log-sawing, you can consider building a special snoring room—also known as a snoratorium. Judge Judy had a separate room built off her master suite in her Connecticut mansion: for herself, as well as for her husband (perhaps whoever is the loudest on any given night?). And before TomKat split, Tom Cruise reportedly had his own snoratorium in the home he shared with Katie Holmes.

If you simply want a quiet sleep while travelling (or you don’t wish your partner’s snoring to bother your neighbors), you may want to check out the Crowne Plaza hotel. In 2011, the hotel chain announced it was trialling snore absorption rooms. Room features included completely soundproof walls and headboards to absorb loud noises and lessen the impact of snoring - lest you and your partner be notified by a "snore monitor."

4. A didgeridoo is a strange but effective treatment.

Treatments for snoring and sleep apnea range from nose strips to dental devices, to CPAP machines (see below) and even major surgeries. But research has also found a much lower-tech solution: playing the didgeridoo. Playing this Australian Aboriginal wind instrument can help strengthen the muscles of the upper airway in the mouth and back of the throat, so it won’t collapse and lead to snoring or apnea.

If your partner is not at all musically inclined, don't worry: playing the didgeridoo doesn't require any musical background! However, it does require figuring out how to make the “drone” sound that emanates from the instrument. This involves a technique known as “circular breathing”—of which saxophonist Kenny G is a renowned expert.

5. CPAP/sleep machines can be chic.

When it comes to conquering sleep apnea with a continuous positive airway pressure (CPAP) machine, there is no way to do it fashionably. Or is there?

It appears that CPAP manufacturers have created some rather chic ways to help women feel a little more "stylish" — if that's even possible when you have a mask attached to your face (which is attached to a hose, which is attached to a machine that breathes in and out like Darth Vader). Among these options: rose-patterned headgear; headgear designed lower on the back of the head allowing for a woman to put her hair in a ponytail; and something called a Snuggle Hose, to cover up your, yep, CPAP hose with fancy fabrics. If nothing else, keeping things chic will at least entertain the two of you.