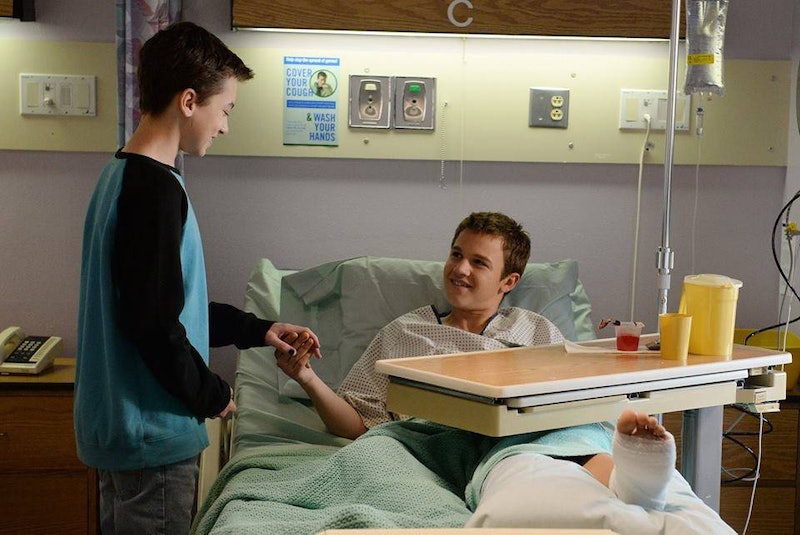 News broke recently that ABC Family's The Fosters Season 3 will premiere Monday, June 8, and I could not be happier. Yes, Season 2 ended less than a month ago, but I need the angsty teen goodness this show supplies back in my life immediately. It's not just because the season ended on an actual killer cliffhanger (spoiler alert — even with Jake T. Austin leaving the show, I'm not buying his character is dead), it's because I need more Jonner in my life! More Stef and Lena! More of Callie legally being part of the Fosters' clan! There is never enough of The Fosters as far as I'm concerned.

That does not mean I don't have a list of demands...err, I mean suggestions for what I need from Season 3: This show has an endless amount of possibilities when it comes to story lines, and though not every plot has been perfect (here's looking at you and your dating troubles, Jesus), it's never not interesting. So, in honor of the show's newly confirmed Season 3 premiere date, here are the seven things that I need to happen in Season 3 when the series returns June 8:

Jesus has long been the least interesting Foster. Compared to the other kids, his story lines have been lightweight and completely tangential to the overarching family drama. While Jake T. Austin shows promise as a comedic actor, Jesus' struggles with ADD, his wrestling adventures, and romantic entanglements were all lackluster. If Austin was sticking around the show could have used the car accident to shine the spotlight living with disability (particularly on a young athlete) — but now that Austin is definitely leaving, it is time to send Jesus off to that boarding school he talked about so much in Season 2.

It's not as permanent (or depressing) as killing off one of the main characters, and it leaves the door open for Jesus (and his abs) to return in the future.

2. Jude and Connor Go on a Date

Jude and Connor had an outstanding year. They shared their first kiss, Connor came out to his homophobic father, and Jude told Callie that Connor is his boyfriend. It was heavy stuff for the most part. These kids have been dealing with their sexuality and seeking acceptance from their families. Season 2 ended in a way that suggested lighter times could be ahead. Now that they have defined their relationship as a romantic one, it is time to see how they deal with dating. After everything they have been through, Jude and Connor's first official date should be a big deal — for the two teens in love, it is a major step in their relationship. It's also one I suspect all the Jonnor fans in the audience want to see.

3. Lena Stops Her Affair Before It Begins

Lena and Monte's kiss was inevitable from the moment Monte showed up onscreen. Just because it was inevitable does not mean it is a good idea. I am all for seeing more of Lena and Stef. Their relationship is beautiful and complicated. I love watching them together whether they're arguing or teaching each other how to twerk. Season 3 should be about the couple rebuilding their trust, not damaging it more. The only way that can happen is if Lena is honest with Stef about the kiss. Even if her honesty leads to an epic fight, at least Stef and Lena will be facing the problems in their marriage together.

Robert finally did the right thing and paved the way for Callie to be legally adopted by the Fosters in the Season 2 finale. In that moment, he became the amazing father Callie deserves. I want to see Callie continue to build a relationship with her biological father and her little sister because she wants to and not because she is being forced to by the court.

Also, anything that keeps Kerr Smith around is a plus in my book.

Emma is the best thing that came out of any of Jesus' story lines, and the fact that she and Mariana are on the same dance team and in STEM together means we should totally get some BFF goodness during Season 3. Emma and Mariana balance each other out perfectly, as evidenced by Mariana showing Emma it is okay to be smart and sexy. They are already well on their way to becoming a dynamic duo, so let's see the good times keep coming.

6. Brandon Comes Into His Own at Idyllwild

According to Variety, there are at least two new characters about to enter Brandon's orbit during his time at Idyllwild, and they are poised to challenge him ways his bandmates never could. Kat (Katherine McNamera) and Tom (Keean Johnson) are both just as passionate and talented as Brandon when it comes to classic music, and it is about time Brandon was not the best musician in the room.

Brandon has always been a good character, but removing him from his natural surroundings will push him just a little bit closer towards figuring out what he really wants for the future. This is a far more interesting storyline for the character thanks in large part to it not entirely revolving around romance.

7. Ana Dies in the Crash

I know, I know...wishing for a character to die is not cool, but someone dies in the crash and Ana would make the most sense. She made amends with the twins, her death would have a huge emotional effect on Mike, and there could be a custody battle over the baby. There's just nowhere else for the character to go at this point, but if Ana is the one who died in the car accident the angst will be real without overpowering the entire show.