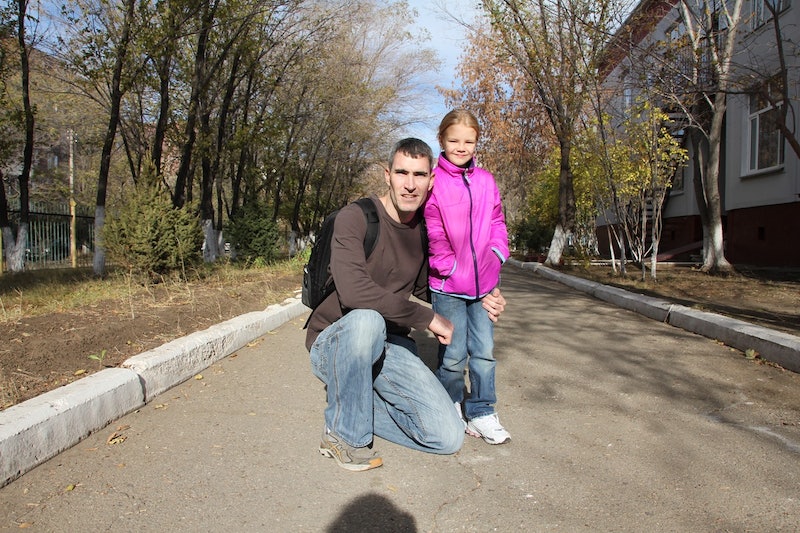 Whenever I hear the name Walter Scott, I not only think about the black man shot to death by a white police officer in North Charleston, but also my husband, Walter Scott Fisk, who works in North Charleston only a few blocks from where the 50-year-old was killed April 4. But here’s the difference: my Walter Scott, 38 years old, is white. And because he’s white, he’s privileged — and alive.

We found out about Walter Scott’s death, yet another instance of a cop shooting an unarmed black man on video in supposed self defense, from an elderly Charleston native who said, “That n—er was running, and you don’t run unless you did something wrong.” Welcome to the South: where you’re still likely to hear the n-word from white people in their 70s. Both my husband and I grew up hearing the phrase, “There’s a difference between someone who’s black and someone who’s a n—er,” professed by people who would swear they weren’t racist despite the fact that they were appointing themselves judge over black bodies and evaluating them as the “good” or the “bad” type of dark-skinned person.

Although I’m pleased to say that my 10-year-old daughter Arina has never heard the n-word (I hope), I’m all too aware that there is a very good chance she will. On the very day that Walter Scott was shot, I came across a headline about a student at University of South Carolina suspended over a racial slur. This is the university where I work, so I decided to talk to Arina.

“There is a word,” I began, “that some people use for black people, and it is unacceptable.” “Negro?” she asked. She remembered listening to the audiobook version of The Autobiography of Martin Luther King, Jr. while in the car with me and reminded me that I had told her “Negro,” a word MLK used frequently, was archaic and not one she should use. I explained the n-word as an even more offensive variant, and I really brought the point home by comparing it to “Mudblood” in the Harry Potter series. Thank you, J.K. Rowling, because this produced the shocked and horrified response for which I was looking. She got it.

My husband’s most recent conversation with a policeman? We were with our friends in Greenville, looking at a vacant lot they had recently purchased in an up-and-coming but still relatively poor part of town. An officer pulled in his cruiser beside us and rolled down his window. “Everything okay?” he asked, his voice concerned. We explained the recent purchase, and he nodded, smiled, and was on his way.

Explaining what happened to Walter Scott is more difficult, and I wrote this essay in an attempt to figure out how, exactly, to explain the complexities of race and privilege in 21st-century America to my 10-year-old daughter in terms that she can understand and in a way that will make her braver (rather than terrified for her black friends).

One way to do it, I suppose, is to tell her about the two Walter Scotts, one white and one black, and how their experience of the world is different in alarming ways.

Our Walter Scott does not fear the police. My husband’s most recent conversation with a policeman? We were with our friends in Greenville, looking at a vacant lot they had recently purchased in an up-and-coming but still relatively poor part of town. An officer pulled in his cruiser beside us and rolled down his window.

“Everything okay?” he asked, his voice concerned. We explained the recent purchase, and he nodded, smiled, and was on his way. This is typical of our Walter Scott’s encounters with policemen. They always seem to assume that he’s a good guy, even if he has expired tags or a broken taillight or a lead foot.

The other Walter Scott had myriad reasons to be fearful. The first was, perhaps, fear of the fine associated with the municipal violation for which he was stopped — because, as John Oliver recently argued, “If you have money, committing a municipal violation may pose you a minor inconvenience. If you don’t, it can ruin your life.” Some have suggested that he was fearful of going to jail for missed child support payments. But he had so many other reasons to be fearful too. They are: Antonio Zambrano-Montes; and Tamir Rice; and LeVar Jones; and John Crawford; and Eric Garner.

These are only the black boys and men for whom we have video evidence of their mistreatment. Of course, the other Walter Scott would not have needed video evidence to be fearful — he had his life experience and the narratives of injustice repeated as warnings in the black community.

Recently, I was telling a friend of mine, who is black, about the stupid mistake I made when stopped by a policeman. I knew I would need my license and registration and that I had put my purse in the trunk along with all my shopping bags. I got out of the car to get it. The policeman yelled, “Get back in the car!” and put his hand on his gun. “I might have been killed for that if I were a black man,” I mused. “No,” my friend said, “because you never would have done that as a black man. Your Momma would have taught you better than that.”

Another disturbing trend? The white community’s need to go on the defensive.

Charles Blow wrote recently in The New York Times about the “disturbing” trend of “deprecat[ing] a person when they have been killed rather than insisting they deserved to remain among the living.” As Blow points out, “The judicial system could have easily dealt with anything Scott is accused of — failure to pay child support, failure to present proper documentation for a car he was driving, resisting arrest, fleeing — and none of those offenses, if he were found guilty of any or all, would have carried the death sentence.”

Another disturbing trend? The white community’s need to go on the defensive. After Walter Scott’s shooting, Will Stack, a black Midlands, South Carolina, man, posted a video after a traffic stop, in which the white officer was respectful. This video has since gone viral.

The white community loves it, as evinced by all the people in my social media network sharing it. They praise this example for being one not depicted in “the media,” as if it’s the media’s fault for highlighting the injustice of black men killed by police rather than policemen behaving exactly as they should. We shouldn’t expect the media to share videos of policemen being respectful at traffic stops, because policemen being respectful at traffic stops should be a given.

Another defensive move is the fevered sharing of “good deed” cop videos, as though a video of a cop buying eggs for an impoverished mother or providing shoes to a homeless man atones for the shooting of unarmed black men. These acts of kindness, though noble, do not atone. Even if Michael Slager had bought eggs and provided shoes (and he may have), those acts do not atone for shooting an unarmed black man in the back.

My great-grandfather wanted to live until I was six years old, so that I’d remember him. I turned six years old on Jan. 11, 1985 and he died a week later. I do remember him. He was a cop during integration, and after he died, members of the black community sought us out and told us that he was respected, that he treated members of the black community the same way he treated members of the white community. I like to think that, were he alive today, he would condemn any policeman who didn’t do likewise — that he would raise his voice and hold them accountable.

Because here’s the secret; and this is what I plan to tell my 10-year-old daughter: There is no “our Walter Scott” and "the other Walter Scott.” They’re both ours.