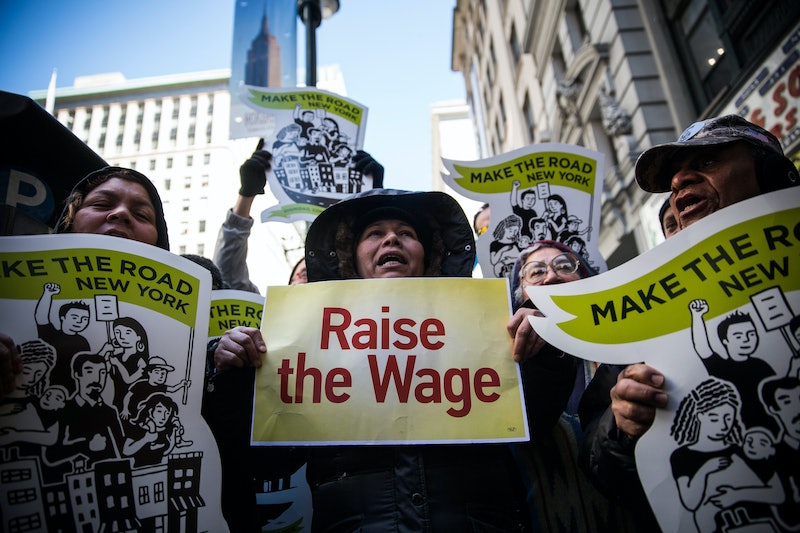 Arguably the biggest ever demonstration by low-wage workers in the United States’ history was staged Wednesday, as thousands of workers in more than 200 cities across the country walked out of their jobs or joined marches to protest for a $15 minimum wage. The 60,000 workers, from Atlanta, Boston, New York, and Los Angeles, among other cities, were taking part in the Fight for $15 movement — which aims to more than double the current minimum federal wage of $7.25. The social justice initiative grew out of a much narrower fast-food worker movement, and has now burgeoned into a nation-wide campaign. No arrests were reported during Wednesday’s protests.

The fast-food worker strikes began, as The Guardian reports, in New York in November 2012, when 200 workers walked off the job. Since then, the diversity of the protestors has multiplied. Wednesday’s participants reportedly included truck drivers, home-care assistants, airport workers, child-care aides, Walmart employees, and adjunct professors. The call for fair wages has reverberated beyond the U.S., and organizers said that fast food workers in countries as far-flung as New Zealand, Finland, and Japan also went on strike.

Much of the action is still seemingly centered on the fast food industry, with large groups protesting outside McDonald’s outlets across the country. Earlier this month, McDonald’s pledged to raise wages and offer paid vacations at U.S. company-owned stores (10 percent of the 14,000 U.S. McDonald’s restaurants, and around 90,000 employees).

SEIU is one of the largest unions in the U.S. (representing, for instance, janitors, hospital aides, nursing home workers and security guards), and is funding the Fight for $15 campaign. According to The Guardian, SEIU has so far spent over $25 million on the project. SEIU's international president Mary Kay Henry has said the expenditure has been worth it: “It showed that if we come together, things can change,” she said in an interview Wednesday. “There’s momentum behind working people joining together to improve their lives. That’s what this movement is about.”

McDonald’s is not alone in its decision to boost wages. Recently, Wal-Mart Stores Inc., Target Corp., and TJX Cos. have all committed to boost their pay to at least $9 an hour. Government data suggests that there are 3.13 million fast food workers in the U.S., earning an average $9.19 per hour. McDonald’s has claimed that the protests are staged events and that protesters are paid to show up. The company also alleges that many of the protestors are not actually their employees. “Our estimation from field reports is that approximately 10 to 15 actual McDonald’s workers have participated in each of these days,” Heidi Barker, a company spokeswoman, has said. She added that McDonald’s has no power over the wages doled out at franchised stores, which account for 90 percent of America’s McDonald’s.

Henry responded by calling Barker’s allegation disrespectful. The claim, she said, “reflects a level of disrespect that McDonald’s has for its front-line workforce.” She continued, “I’m insulted by McDonald’s suggesting these are somehow not their employees.” Henry told The Guardian:

There is not a price tag you can put on how this movement has changed the conversation in this country. It is raising wages at the bargaining table. It’s raised wages for 8 million workers. I believe we are forcing a real conversation about how to solve the grossest inequality in our generation. People are sick of wealth at the top and no accountability for corporations.

President Barack Obama, meanwhile, has been trying (with little success) to secure a national minimum wage of $10.10. Senate Democrats are now working on a proposal to up that increase to $12 by 2020. Last year, Seattle was the first major U.S. city to pass a $15 minimum wage. The city has since begun phasing in higher wages, with manifestly promising results. Oakland, Chicago, Alaska and Arkansas have all recently passed minimum wage increases.

The New York Times points out that with the 2016 presidential campaign beckoning, the fight for higher wages has ramped up at a potentially crucial moment. The anger over inequality that blossomed in the Occupy Wall Street protests has not diminished, the protests seem to suggest. And Fight for $15 hopes to harness that energy. “America, period, is unequal,” Chasten Florence, 26, a construction worker from Jamaica, Queens, told the Times Wednesday. “Once we accept that, we can change that.”

But it’s an uphill battle. The International Franchise Association, representing franchise owners, denounced the protests as “a multimillion-dollar public relations campaign designed to mislead the public and policymakers.” Nevertheless, the sheer volume of Wednesday’s demonstrations indicates a re-energized labor movement, united across industries by a desire for justice and dignity.

More like this
Iran Has Issued A Death Sentence Over Mahsa Amini Protests
By Catharina Cheung, Darshita Goyal and Maxine Harrison
Buckingham Palace Aide Resigns Over “Unacceptable” Comments To A Black Guest
By Shahed Ezaydi
Joe Lycett Just Took HIs David Beckham Qatar Protest To A Whole New Level
By Sophie McEvoy
Footballer Jake Daniels Shared His Thoughts On A World Cup Boycott
By Sam Ramsden
Get Even More From Bustle — Sign Up For The Newsletter