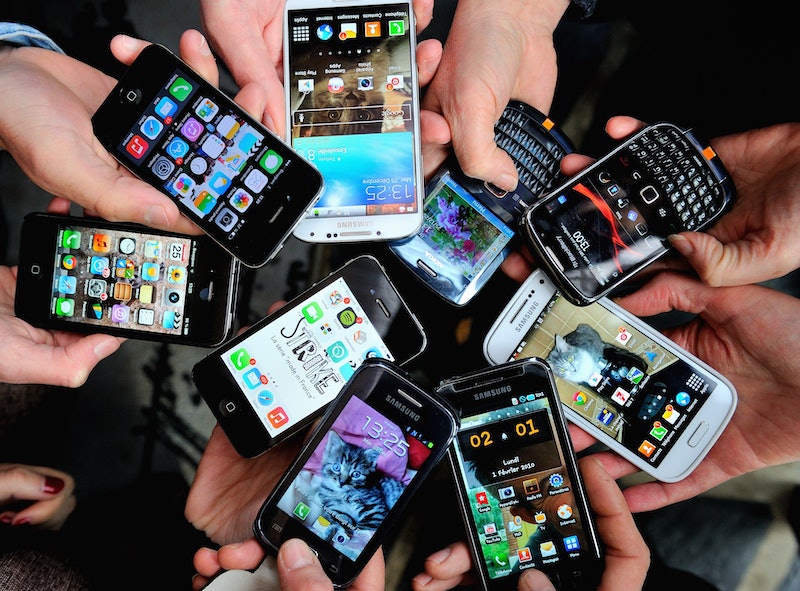 Given our increasing addiction to technology in our daily lives — from checking our smartphones every few minutes, even though we know it can lead to health problems like "text neck," to reading our tablets late at night after we've been warned that doing so can damage our sleep patterns — it's no surprise that enjoying a day of unplugging or two has become an increasingly popular health trend. Doing a "digital detox"— that is, taking a break from technology for a certain period of time — is sold as a chance to relax and check out from the stresses that constant digital connection can bring. But it turns out that not everybody reaps the same emotional benefits from unplugging — and for some personality types, unplugging can be downright depressing or anxiety-inducing.

Dropping off the grid for a few days has become our idea of modern decadence — that's why camps and retreats that encourage both adults and teenagers to focus on life beyond technology now exist across the Americas, and numerous luxury travel retreats boast "being technology free" (meaning: no wifi, no phone reception) as a selling point. However, recent research has revealed that unplugging isn't actually the same experience for everybody. Whether you actually benefit from your digital detox hinges on a host of factors, including how extroverted you are, and your mood stability. So while some folks trumpet the digital detox as a cure-all for all the problems of the modern world, for some of us, it can create new problems. Read on and discover the four personality qualities that might make taking a digital vacation the wrong choice for you.

1. You Have An Addictive Personality

Technology is addictive. While experts disagree on whether it can be officially classified as a serious addiction in the vein of an alcohol or gambling addiction, they're all in agreement that it can be the source of a serious psychological fixation. And a dangerously acceptable one: a study by the mobile company Nokia found that the average person checks their phone once every 6.5 minutes, so folks who are pathologically obsessed with their devices don't stand out too much from the rest of us.

Since technology can be a real addiction, if you're prone to addictive behavior, unplugging not be the relaxing day in the park for you that it is for others. Addicts become hooked on the dopamine rush in the brain's reward center whenever they engage in their addictive behavior; so going digital cold turkey might remove that dopamine rush and send the tech addict spiraling into depression, or, worse, seeking new sources of dopamine rush. Even if you want to break your tech addiction, a slow decrease in use, rather than a full digital detox, may be a more effective approach.

A study in the June 2015 edition of Personality And Individual Differences surveyed 346 American college students in order to see what kind of personality type is most vulnerable to smartphone addiction. The study was based on the 3M Hierarchical Model of Personality — a theory which basically says that our personalities influence how we consume products. The results were both slightly alarming and pretty intuitive.

If you're an introvert, you might find is easy to switch off: the study found a very negative relationship between introversion and smartphone addiction. But extroverts, who tend to get bored easily and crave a lot of social time — "to be under-aroused and likely to seek out stimulation," in the words of the study — are more likely to be chained to their smartphones.

So, while digital detoxes may prove helpful to those who need alone time to recharge, if you text your friends 400 times a day because you need social connection, you're going to find it difficult (and possibly lonely) to switch off for the day.

3. You're Moody Or Emotionally Vulnerable

The study mentioned above also found a few other personality characteristics that correlated to heavy smartphone attachment. It turns out that "a person who is moody and temperamental may be more likely to be addicted to their cell phone than more stable individuals." This is because tweeting, Facebooking and texting might be "an attempt at mood repair" — i.e. to make you feel better through social approval and connection. This backs up the results of a study from 2007 which found that "disagreeable" people (which is actually a technical term for people who find it difficult to be socially harmonious all the time) are more prone to being mobile phone addicts. Funnily enough, it may be the people who like other people the least who find it the most difficult to unplug from others for a day.

How do impulsiveness and addiction connect? It's kind of a chicken-and-egg problem: addiction looks on the surface like it's all about suffering from impulse control issues, but some experts think it's actually the opposite — impulsive behavior is immediate, whereas addiction is also about long-term planning. But either way, studies have shown that if you have a more impulsive personality, you're more likely to be seriously attached to your phone and other technology.

A 2012 study showed that impulsiveness — i.e. following through with a thought or desire immediately, without really considering the consequences — is heavily correlated with high smartphone use. Another 2012 paper showed that people seeking treatment for internet addiction had the same low level of impulse control as people being treated for gambling problems.

Why do impulsive people feel so attached to today's technology ? Possibly because the sheer diversity of stuff instantly available through our devices — Farmville, Instagram, Facebook, eBay — can satisfy every whim immediately. Want to buy a dress, get a reward in a game, arrange a vacation, or look at dogs dressed as pineapples? It's at your fingertips. And for truly impulsive individuals, having so many instant distractions available on their phones might keep them from making real-world impulsive decisions that sometimes come with negative consequences.

So the next time that somebody asks you to join them in a day of digital detoxing and tells you that it's good for everyone, just say "I can't. I'm a moody, emotionally vulnerable, impulsive extrovert, so science says I wouldn't actually find it helpful or relaxing. Also I haven't got to the next level of Candy Crush yet."