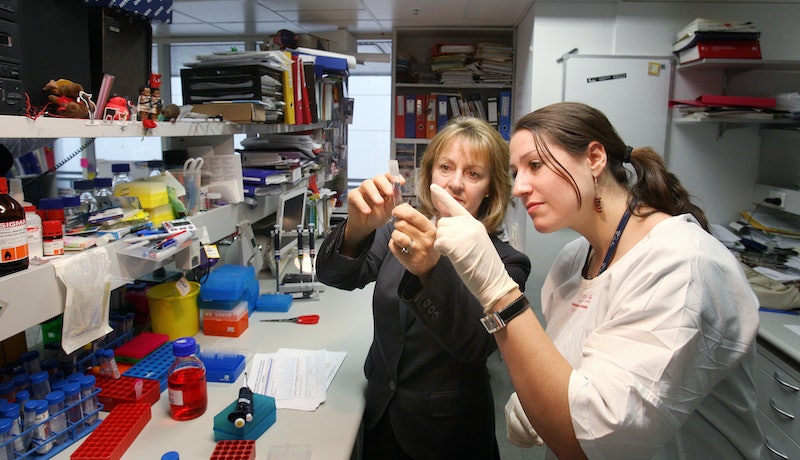 In 2013, Nature, the prestigious journal of science, published an article entitled “Science for all.” Its premise? That “sexism still exists in science,” with women reluctant to enter a field weighed down by endemic gender bias. That’s why it's so thrilling to see five female scientists on the TIME 100 list of the world’s most influential people for 2015. These women — specializing in fields such as genetics, health technology and infectious disease — have triumphed in an environment that is, frankly, not always welcoming.

Women have of course always taken an interest in scientific pursuits — as evidenced by The Guardian’s slideshow of women in science throughout history. And yet, they have seldom been encouraged to excel in that field. Nature highlights that in the U.S. and Europe, although about half of all science and engineering doctoral degrees are awarded to women, only one-fifth of full professors are female. Reportedly held back by a dearth of confidence, linguistic exclusion, and a lack of role models, women are more likely to choose fields such as education, language, and nursing, leaving men to dominate the scientific realm.

But looking at TIME 100’s pioneering female scientists, one hopes that this imbalance could change. These five women have made contributions that are important for the spectrum of humanity, regardless of gender, and are rightly celebrated for their tenacity and innovation. So who are they? Very, very clever people, for a start. But to be more concrete, here’s a run-down (in no particular order).

A double-bill in the TIME 100’s “Pioneer” section, Charpentier and Doudna are a scientific dream team: creators of a gene-editing technology that allows scientists to remove or add genetic material as they please. Charpentier and Doudna examined bacteria’s defenses against viruses, discovering how the efficient bacterial defense mechanism actually worked, before creating what fellow geneticist Mary-Claire King calls a “plug and play” version of the process.

The result, called CRISPR-Cas9, can theoretically let scientists alter any gene at will. So far, the technique has been used to excise HIV, to fix sickle-cell anemia, and to render cancer cells more vulnerable to chemo. If that sounds amazing, trust the scientists when they say it is. “This is a true breakthrough,” writes King, “the implications of which we are just beginning to imagine.”

Charpentier is a professor at Hannover Medical School, while Doudna heads The Doudna Lab at UC Berkeley.

Henry Kissinger ain’t kidding when he says that she also happens to be a “tech visionary.” Staunchly committed to the idea that health care should be a basic human right, Holmes dropped out of Stanford at 19 on a mission — to make that dream a reality.

Described by TIME as a “health technology entrepreneur,” she has pioneered a new way to conduct blood tests that drastically reduces costs, checks the sample for a range of infections, and — crucially — is portable, thus transportable to the world’s underdeveloped, remote regions.

The method is painless, needle-free, and cheap — and will be able to reach the places that need it most. Holmes’ company, Theranos, has made her the world’s youngest self-made female billionaire. Yet she seems disinterested in the money. "You know, it's not what matters," she told CBS. "What matters is how well we do in trying to make people's lives better. That's why I'm doing this. That's why I work the way that I work. And that's why I love what I'm doing so much."

The job description “Ebola detective” is at once awesome and terrifying, and that’s how Dr. Sabeti (head of a lab at Harvard) is introduced in her TIME profile. Sabeti has been at the forefront of the scientific battle against the deadly virus, following its outbreak in West Africa. She and her team began sequencing Ebola virus samples from infected individuals almost as soon as the epidemic started — heralding the first real-time DNA sequencing attempt while a pandemic was in full swing.

The work that she and her collaborators did proved decisively that Ebola was being spread from human to human, rather than via animal vectors. But the discovery was not without cost; many of her fellow scientists died in the attempt to get these life-saving results.

When she’s not sequencing viruses and saving lives from a scientific War Room, Sabeti is apparently an enthusiastic singer-songwriter.

Liu crops up in TIME’s “Leaders” section, and for good reason. As president of Doctors Without Borders/Médecins Sans Frontières (MSF), she has been one of the people spearheading the struggle against Ebola. MSF was in the trenches, and urging the world to pay attention, as Ebola rapidly spread. A year after the emergence of the virus, the organization eloquently denounced the fatally tepid global response to the outbreak. “For the Ebola outbreak to spiral this far out of control required many institutions to fail,” an MSF report stated. “And they did, with tragic and avoidable consequences."

Tom Frieden, director of the U.S. Center for Disease Control and Prevention, profiles Liu, and he praises her candor and commitment. “Under incredibly difficult circumstances, Liu was focused and flexible,” he writes. “Most important, she charged — and continues to charge — the world to better respond to crises.”

Liu has served as international president of MSF since 2013, having previously worked for the organization in many countries: Mauritania, Indonesia, Haiti, Kenya, Congo, Central African Republic, and Palestine, among others. Her on-the-ground humanitarian work in conflict-ridden and poverty-stricken countries is just as impressive as her poised leadership under pressure.

More like this
Watch Jacinda Arden’s Devastatingly Honest Resignation Speech
By Sam Ramsden
This Is When Netflix Is Going To Start Charging You For Sharing Passwords
By Darshita Goyal
6 Organizations Fighting Police Brutality That You Can Support Right Now
By Syeda Khaula Saad and JR Thorpe
Eurovision Has Been Given A Whole New Look Ahead Of Its Liverpool Debut
By Bustle UK
Get Even More From Bustle — Sign Up For The Newsletter
From hair trends to relationship advice, our daily newsletter has everything you need to sound like a person who’s on TikTok, even if you aren’t.