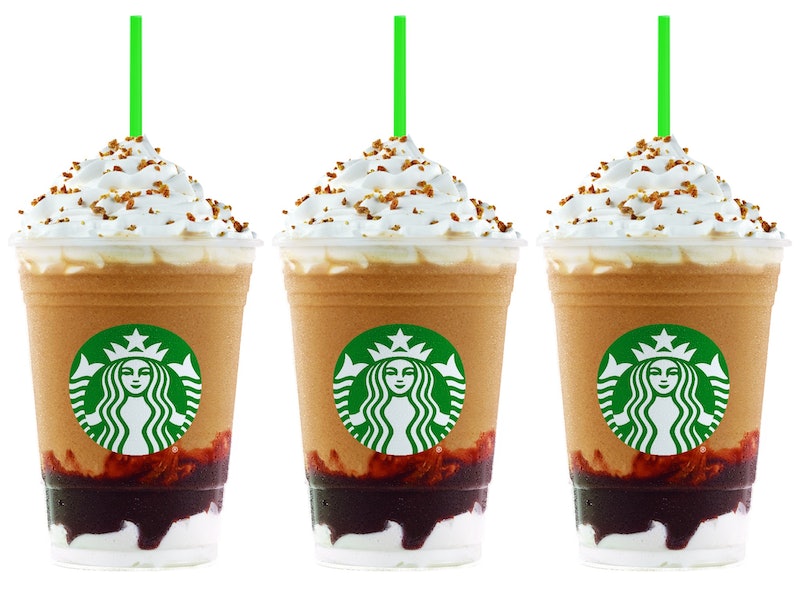 UPDATE: A Starbucks spokesperson has confirmed with Bustle via email that the Starbucks S'mores Frappuccino is officially happening. It's arriving on April 28, and I can't wait. Get your Frap-loving palates ready, because it's going to be big. Yum!

You guys. The Starbucks S'mores Frappuccino is coming. I'm not kidding; as far as we know, it's the next limited-edition drink slated to hit Starbucks' menu. Given that summer is just around the corner, it's the perfect choice, is it not? I mean, summer means camping, and camping means s'mores, soooo… it all just makes sense. It also sounds more like dessert than like a mid-afternoon pick-me-up, but such is the way with most blended coffee drinks. Think of it like the more adult version of a milkshake. Feel free to add some booze to make it really grown-up.

Details about the S'mores Frap are scarce at the moment, but according to Cosmopolitan, the 'Bux confirmed today that the new beverage will make its way to Starbucks stores on April 28. We've reached out to Starbucks for comment ourselves and will update if and when we hear back; given that Mashable noted the same date, though, it's probably relatively safe to take it as gospel truth.

As for what's in it? Cosmo reports that the S'mores Frappuccino will be a layered affair, with marshmallow on the bottom, chocolate sauce on top of that, and “a creamy blend of graham, coffee, milk, and ice” filling the majority of the cup. More marshmallow whipped cream will grace the top of this decadent creation, along with a graham cracker crumble.

Is it just me, or does it seem like each new Frappuccino is more decadent than the last? I mean, I thought the Birthday Cake Frappuccino was pretty up there, what with its fancy-schamncy raspberry-infused whipped cream and all — but the S'mores one is really something else. Remember when the Frappuccino first debuted way back in 1995? At the time, there were only two flavors available: Coffee and Mocha. Whipped cream on top wasn't even an option yet. My, how far the drink as come!

Anyhoo, the S'mores Frappuccino is also available in bottled form; although bottled Frappuccinos usually bear little to no resemblance to their freshly-made counterparts, it still sounds like a tasty type of coffee-spiked chocolate milk. I'm down for that. I'm always down for chocolate milk.