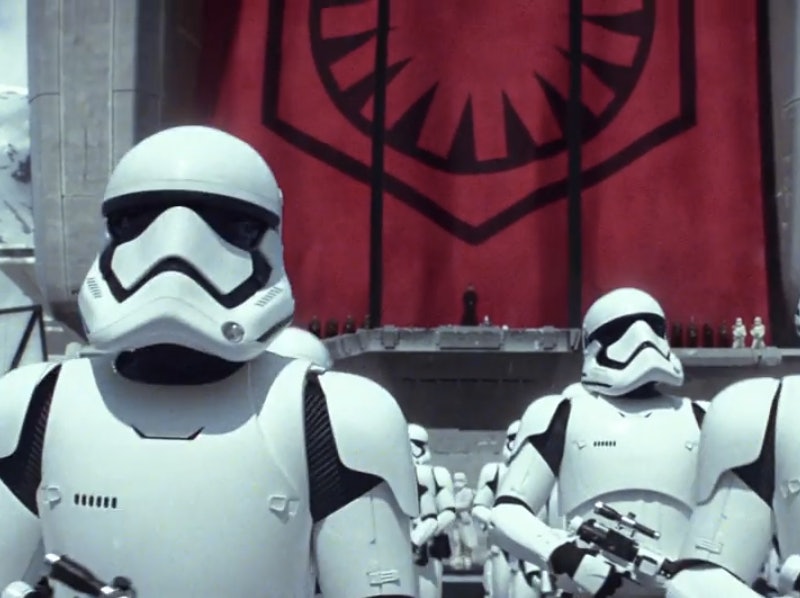 As I'm sure the entire Internet has observed as this point, the new Star Wars: Episode VII — The Force Awakens trailer is here, and it looks fantastic! I'm getting goosebumps just from hearing the classic theme music playing in the background. The new footage was revealed during the Star Wars Celebration panel in Anaheim, California, and with it came a few more heart-pumping secrets and looks at never-before-seen characters.

Fans, of course, went absolutely bonkers — and who could blame them? The announcement of a new Star Wars trilogy to continue the stories of a galaxy far, far away was the biggest announcement in modern movie history. After all this time of patiently waiting for something, anything about what the first of the next installments would hold, fans are now getting the details.

I already detailed all the information revealed by director J.J. Abrams, producer Kathleen Kennedy and their cast of characters during Star Wars Celebration, but what secrets does this new footage hold? We see more looks at the three core characters — Finn (John Boyega), Rey (Daisy Ridley) and Poe Dameron (Oscar Isaac) — as well as the new Stormtroopers, the new villainous Sith lord with that broadsword-esque lightsaber, and much, much more.

If you're obsessed with things like The Force, Jedi knights, Sith lords, lightsabers, or just the smoldering and sexy Boyega, now's your chance to reflect on all the juicy tidbits from the trailer. But first let's watch it again:

Now, let's get to the goods!

Abrams and Kennedy announced today that this desert planet is not Tatooine, the planet where Luke Skywalker grew up. It is, in fact, a whole new planet called Jakku. It's here where we'll meet Ridley's character, Rey, and, apparently, crashed spaceships.

This is the ultimate #TBT we could've hoped for. Darth Vader's helmet, once an image of fear throughout the galaxy, is nothing but a melted and decaying form of its former self. As the voiceover states, "The Force is strong in my family. My father had it..." I'm assuming the voice is none other than Luke Skywalker, and here's more evidence...

"...I have it..." continued the voice, as we're introduced to a hooded figure laying his artificial hand on R2-D2. Skywalker got his hand lightsabered off in the original films, and this lovable droid is one of his buddies. By that logic, I'm gonna go ahead and speculate that this is the same guy under the hood.

There's a reason the original Star Wars characters are coming back for this new trilogy. It's so they can pass the responsibilities onto a new generation. It's unclear who the "you" is that Skywalker is talking about, but the hands seem delicate, either feminine or that of a child's. Either way, we will definitely be seeing Skywalker's kid (or kids) in Episode VII.

5. What Does This Remind You Of?

X-Wing pilot Poe Dameron (Isaac) is having a grand ol' time flying his spacecraft, but does this moment remind you of anything? How about that scene in the original films when Han Solo is screaming, "Yeeha!" as he speeds through in his Millennium Falcon? [SPOILER ALERT] There's a rumor going around that Dameron is a descendent of Solo, and this scene is a slight visual and auditory nod to that. Assuming it's true, of course.

As Boyega described during Star Wars Celebration, Finn is in grave danger. We saw him once before in his Stormtrooper suit, and now he's brought whatever is chasing him to Rey and the lil' BB-8 droid.

Finally we get to see the face of evil. Kylo Ren is that same hooded figure from the first trailer brandishing that massive red lightsaber over which every Star Wars nut was disgruntled. It's interesting that we now see him wearing a helmet. Is that because his face is scarred or deformed? Or does he merely wish to hide his true identity? It's unclear who he is, though worth noting is that before Adam Driver was cast, he was said to be auditioning for the lead villain role.

There's been a lot of chatter about a Chrometrooper making his or her appearance in Episode 7, and we now have actual, totally legit proof. Do you wanna know who's underneath that armor? I'll give you a couple of ellipses in case you wanna avoid any spoilers... ... ...

OK, ready? Word on the street is that this is Gwendoline Christie's character. This actress is killing it! She plays a badass in Game of Thrones, she's going to play a badass in the final Hunger Games movie, and now she's gonna be a badass in Star Wars .

Remember how Rey and Finn were running away from explosions on Jakku? Well, it looks like that reign of fire came from these TIE fighters. Thankfully, the Millennium Falcon swoops in to save the day!

Yass, Solo, yaasss! You're lookin' good for a 72-year-old. By the looks of the Millennium Falcon flight patterns, he's still got some tricks up his sleeve.