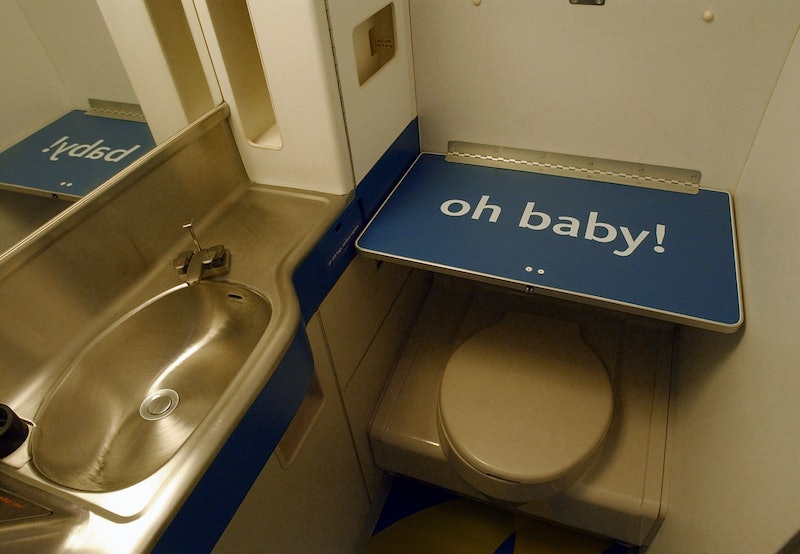 Really, why aren’t there diaper-changing tables in men’s restrooms? Men and women have probably been asking that question for a while, but now a senator is asking it, too. Democratic New York State Senator Brad Hoylman is fed up with the lack of diaper-changing tables in men's bathrooms. So, Hoylman set to out to change that and is now trying to pass a bill requiring it.

The bill, which Hoylman plans to introduce to the New York State Senate on April 17, would make it mandatory for all new buildings or renovated bathrooms in the state of New York to have changing tables installed in both the women’s and men’s restrooms, BuzzFeed News reports. Moreover, the business would be responsible for the cost — not the state. However, pre-existing buildings and businesses would not be expected to create extra costs by making the update.

For Hoylman, this issue is a personal matter. But he also acknowledges that it’s much more than that. He told BuzzFeed News:

This is a personal issue for me, but it’s also about men needing to pick up the slack in parenthood.

Hoylman makes a good point. The fact that there are still only changing tables in the women’s restroom underlines not only an inequality in parenting expectations between mothers and fathers, but moreover, a gender inequality issue and the perpetuation of stereotypical gender roles. We no longer live in a society where only women cook, clean, and care for the children, so why haven’t our restrooms been updated to reflect that fact?

According to a study from the Pew Research Center, the number of stay-at-home dads has risen significantly in recent years. The poll, which was take in June 2014, found that the number of stay-at-home dads had increased by 2 million since 2012. While some of that increase can be attributed to the economic recession and to long-term unemployment, Pew reports that the percentages of working mothers and working fathers who would prefer to be at home raising children rather than going into the office are roughly the same.

For Hoylman though, the lack of changing tables in men’s restrooms underscores yet another issue of inequality. His daughter doesn’t have a mother; she is the child of a same-sex couple, which makes the absurdity of the lack of changing tables all the more clear. Hoylman and his husband quite literally only have the choice of, as he put it to BuzzFeed News, “a pee-covered floor next to a urinal.”

There are plenty of dads out there who are more than willing to change their kids’ diapers — they just don’t really have many options for where to do it. The 50s are long over. Let’s give dads an easier time getting their hands dirty. As the roles of mothers and fathers continue to converge, our public restrooms should start to reflect that.