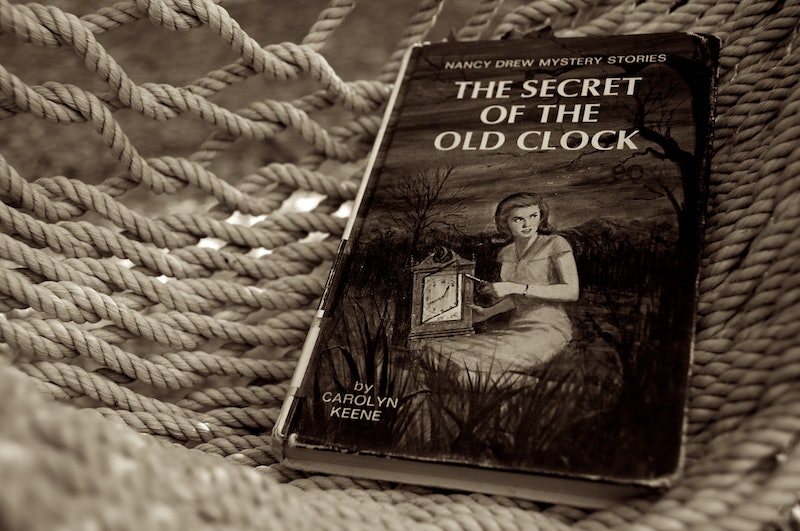 Growing up, all you wanted was a magnifying glass to pair with your cutest skirt. Together, the two were prime mystery-solving gear. You'd need them, of course, when you went out to go solve a mystery with Nancy Drew. If you were anything like me, it was all you wanted to do.

Nancy was only 18, but when I was 10 years old, she seemed so much older to me. She was out of school, had a car, and seemed to come and go as she pleased. Plus, she had Bess and George, and not to mention Ned Nickerson by her side. To top it all off, she solved mysteries not even the police could figure out, and who didn't want to do that? I grew up convinced there were going to be mysteries around every corner waiting to be solved.

And let's not forget her spin-offs. There were plenty to choose from: The Nancy Drew Files, during which Nancy went to college, and Nancy Drew and Hardy Boys Super Mystery books. There was enough Nancy Drew mysteries to keep me occupied through high school had I wanted them to. Looking back, Nancy was a pretty good role model. But no matter how old I got, some things always stuck in my mind. Like, for example, these:

Nancy was great on her own, but never as good as when she had Bess and George by her side. There were some times when she just couldn't go in alone, and her funny, sassy best friends were always up for an adventure. These three set the tone for the future sets of best friends we would come to love as we got older, from Sex and the City to Girls.

You Had to Have a Convertible

A blue one, please. Nancy was always jetting off in her bright blue car. So much so that people knew when she was coming as they saw the car approaching. As we read the books, we grew up wanting a signature car just like Nancy's. And also, a license to go with it.

Hannah Gruen Was the Voice of Wisdom

When Nancy's father was working, and Bess and George weren't around, Nancy still had someone to talk to: Hannah Gruen. Her housekeeper turned mother figure and confidante, Hannah was there with words of wisdom and ways to make Nancy see her problems in new ways. One thing was for sure, Nancy wasn't lacking in amazing women to help her when she needed it.

No Outfit is Too Fancy for a Mystery

If the covers were any indication, there was no dress code when it came to sleuthing. Fancy dress? No problem. The Nancy Drew books took the trench coat and magnifying glass theme and threw it out the window. Sure, the outfits were a little crazy sometimes, but hey, she was only 18... and fashion was top of mind.

The Movie Should Have Been So Much Better

Emma Roberts? Good. Nancy Drew? Good. The stars all aligned, but ultimately missed the mark. Nancy was way too young, and Ned looked more like a younger brother than a boyfriend. I still hope they try again some day. My inner detective wannabe needs this.

"Anything Boys Can Do Girls Can Do Better"

So the saying goes, and so Nancy Drew proved. The Hardy Boys were the obvious comparison books at the time, but Nancy had no problems keeping up with the three male investigators. Sure, Ned saved her sometimes, but she was no damsel in distress!

Nothing Compared to the Original Books

There were more spin off series than I can count, and some of them were good, but... nothing compared the the original. From The Secret of the Old Clock on, there is just something about the old fashioned covers and themes that screams "childhood."

Nancy and Ned Were the Original #RelationshipGoals

They had alliterative names, I mean, come on. Ned was described in that classically handsome way we all swooned over in our elementary and middle school minds. Thoughtful, smart, the list goes on and on. Which made it all the more disappointing to see him in the movie!