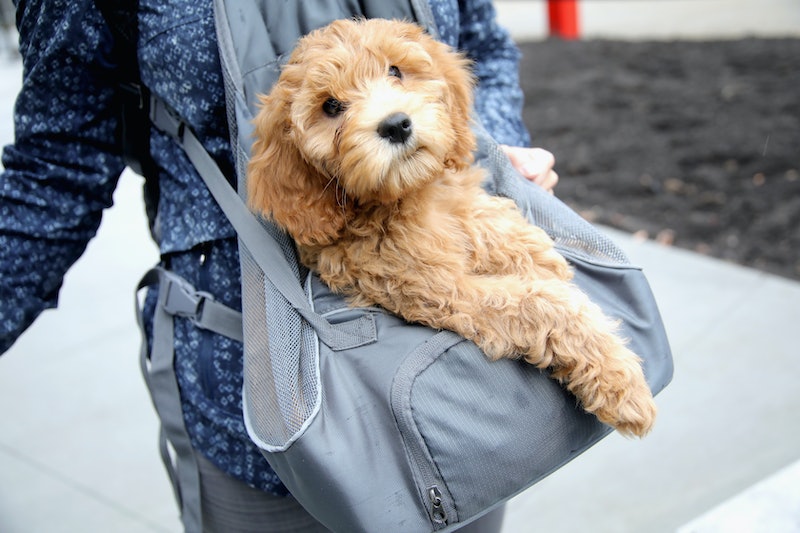 If you've had one, you know it's possible for you to love your dog like a child. You build your schedule around them, always ensuring that their needs are fulfilled before you acknowledge your own, facilitate puppy play dates, keep the right amount of exercise for your favorite little pal in mind and are even willing to take those dreaded midnight walks for obvious reasons. But why? Well, as with many things, we now have a scientific explanation for the bonds we create with our dogs — and it's a bit surprising. Staring into your dog's eyes triggers the same reaction in us as staring into the eyes of our own newborns, a surplus of the bonding hormone oxytocin being released whenever we catch a gander at those big brown peepers. Plot twist, am I right?

The study, which was published in Science, discovered this bonding mechanism along with the even more surprisingly fact that it is specific to domesticated dogs. Wolves, for example, are unable to connect with humans this way. Why is that? The going explanation is that both humans and dogs domesticated in order to facilitate one another's survival as both species were evolving.

To test this bond further, dogs of both gender were put into a room with humans and were either sprayed with saline or with oxytocin on the nose. Interestingly enough, male dogs weren't as affected by the oxytocin introduced in the experiment in general, which suggests that females may be even more prone to this sort of connection with their human friends.

This is all well and good but it doesn't help to explain the most baffling question of all, and that is why chihuahuas exist. When one stares into my own eyes I'm far more likely to cringe than to get the inexplicable urge to snuggle and protect it. But hey, I'm a lab girl, so maybe it's just me.

More like this
The 19 Best Tweets & Memes About Bisexual Awareness Week
By Lexi Inks
These 4 Signs Are The Seductive Sirens Of The Zodiac
By Brittany Beringer
Are Quality Time & Gift-Receiving Love Languages Compatible?
By Lexi Inks
The Differences Between Polyamory & Open Relationships
By Lexi Inks
Get Even More From Bustle — Sign Up For The Newsletter