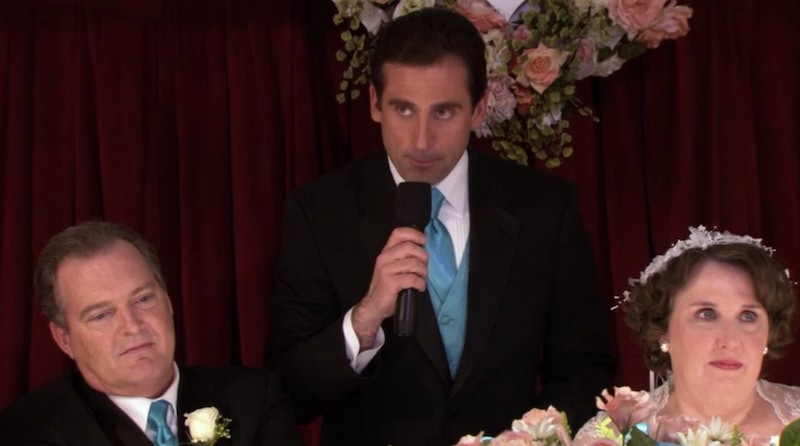 There are a lot of weird questions you find yourself asking when it's time to start planning your wedding, especially when it comes to your guest list — like should you invite your boss to your wedding? Your coworkers? I get it. November 2011 was a whirlwind month for me. In short, I got a new job after years of looking, met my ultimate favorite American Idol, David Cook, at a show I went to by myself (and I had a great time, thank you very much), and also got engaged during a really amazing weekend trip with my then-boyfriend. The engagement came as kind of a shock; we knew we wanted to get married, but I had no clue that the proposal would happen when it did. Thus, I wasn't actively scavenging the apartment we lived in for ring boxes, or clues. I thought we were just going to visit New York City and come home and have the same relationship status that we did when we left Pennsylvania.

When my brand new boss and shiny new coworkers asked me how my weekend went, I kind of threw the engagement news in there subtly. Heck, these people didn't know my boyfriend. They had only known me for a week! Obviously I got the kind congratulations, followed by the inevitable common question: "Are we going to be invited?"

I laughed it off, and told them that we hadn't even picked out a date yet. Which, obviously was true. But it got me thinking — will I be at this job when I finally get married? Will these people be really good friends of mine when it happens? If so, do I have to invite everyone? It was just too soon to tell, and I figured that by the time the guest list was set, I still wouldn't have a good idea of where I stood with this brand new workplace.

At the end, I didn't end up inviting them — even though, I wish I did. I stayed there long past my wedding, and truly formed a bond with them that I wish I could have predicted very early on.

If you're in a similar position about whether or not to invite the boss, here are some questions you should ask yourself before making the call.

Some bosses are scary. If your boss is intimidating, there's no reason you should invite him to a day of bliss and happiness. Make this the one day you don't focus on work, and focus on the people you really care about spending the day with.

2. Would I hang out with these people outside of work?

If you're the type of person to catch a happy hour with your coworkers, chances are you've developed a relationship that spans past the 9 to 5 grind. Choosing to spend your free time with the same people you're technically forced to hang out with for money means that they should probably be invited if you have the space.

3. Am I nervous to dance in front of my coworkers?

Thank the heavens that it's 2015, and people seriously don't give a crap anymore about whether or not you can dance well. Being able to let loose and be the Elaine Benes you know you are on the inside makes weddings even more fun. If you can 100 percent be your goofy self in front of people who may or may not make some snide comments the second you're back at your desk? Consider the invite. If not? Reject the opportunity.

4. Do you feel obligated to invite them?

If you feel like you should, because — well, you really should — then don't. Seriously. As the bride, you can call the shots with this. Your coworkers don't need to know how big or small your invite list is, and they also won't have a great time if they feel like they're equally obligated to go. Pruning the guest list is a big pain in the butt, but if you're choosing between good acquaintances and good coworkers, choose the acquaintances. Hopefully they're more permanent.

5. Does your boss seem to care about you as a person?

Some bosses are actually interested in your life, while others are interested solely in how fast you can get that paperwork done. The best bosses like you as a person, and take interest since they know you're a hard worker with a lot of spirit. Sure, they're nowhere near as close to you as your best friend, or even the sister you haven't talked to in four years (she knows what she did), but they know the name of your dog. And that's kind of cool, and worthy of an invite.

6. Will they actually have a good time?

My work bestie at the aforementioned job got engaged about a year after my wedding, and I was super excited for him. Finally, he could join me in commiserating about wedding nonsense! At one point, he made a point to ask me, "Do you WANT to be invited?... I mean, you won't know anyone else." This was true. While my bestie and I had bonded, I might spend the whole night sitting at the table. Even worse, my husband might feel even more out of place. While it'd be amazing to see him get married, I knew it'd be hard to justify an invite.

It's a solid question to ask. Will you invite enough coworkers so that they'd have company? Do your coworkers know any of your other friends? If so, invite away! If not, it's totally fine to leave them off the list. They'll understand.

If you work in a huge office, where you're just a number? No invites necessary. But if you work in a small mom-and-pop operation where everyone knows your name, it's a bit harder. With small offices, you form bonds pretty quickly, thus your coworkers might expect an invite. I mean, chances are they've seen you do a bit of wedding planning on work time. If you're one of a few — or the boss of a few — young, new employees, they should probably get an invite if you've been there long enough.

If you're still on the fence, I'll tell you this — my now-husband had a table of his coworkers, and it wasn't a horror show. Not only did my dad have some classic conversations with them (or so I've been told), but they all chose to show up since they wanted to, instead of feeling obligated. If a coworker feels uncomfortable coming, they probably won't. So if you have the space, it might not be such a bad idea.

At least consider putting them on the B-list.