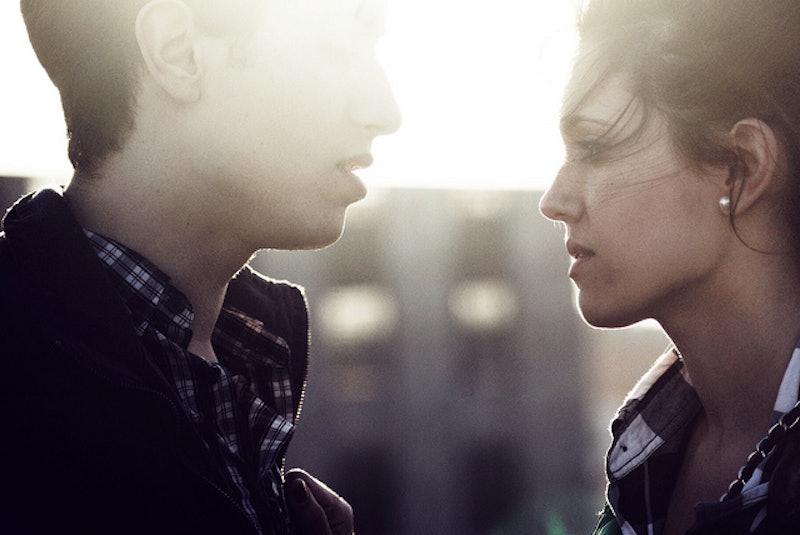 “Lying is a cooperative act.” That’s what Pamela Meyer, author of Liespotting likes to say, and in the case of two-timers and cheaters, she’s right on the money: we want to believe the people who have seen us naked. Sadly, that means anyone who's Googled “how to tell if you’re being lied to” (guilty) is 50 percent of the problem. You know dang well they're lying, boo! You just don't want to.

Relationship blind spots are very real, and all the best liars know it: Henry Oberlander (who Meyer brings up in her TED talk and who was an extremely successful con artist in the 1930s), said his one rule for manipulating people was knowing that “everyone is willing to give you something for whatever it is they’re hungry for.” For those crazy loons among us who just want love and trust (CRAZY, right?), that can make seeing the truth difficult—especially if dealing with it means cutting off your source of that love and trust.

It can be extra be confusing when you're not even sure what you're getting out of a situation. Why do we feel compelled to stick around with people we don’t quite believe? Why is it easier to buy sweet talk than hard evidence? Why does sneaking into a club disguised as a bellydancer ever seem like a thing that could work out well? Once you know what you want to hear, at least according to Meyer, you’ll do a much better job of sussing out the truth.

With that said, lies do serve a purpose in our relationships: they help bridge the gaps between fantasy and reality so that developing unions have a fighting chance. And for less intimate attachments, like those with friends or coworkers, white lies like pretending you have plans to score some alone time aren't a huge deal. It's when you feel like a partner has something to hide (like where they're going after work), that it may be time to look closer.

For best results, use the following "red flags" as markers of areas you need to discuss further. As Meyer says, the experts don't use lying "tells" as “gotcha” tools, but as guidelines for having mature difficult conversations.

Or just set his/her car on fire. Do you!

1. Speaking in a weirdly formal or distant way

Bill Clinton’s infamous “I did not have sexual relations with that woman” speech is memorable for the same reasons it’s a red flag: the awkward phrasing. Clinton’s use of “did not” instead of “didn’t,” and clunky “have sexual relations“ that woman” are tip-offs that he wanted to distance himself as much as possible from the dirty, dirty truth. Another common distancing move: removing the "I" pronoun from stories.

2. Changes in tone of voice or emotional “flare ups”

You’re in a better spot than most FBI agents when it comes to interrogation: as half of an intimate relationship, you know your partner’s normal speech patterns (which is the purpose behind questions like, "What’s your full name?”). So, you’ll know something’s up if your bae’s voice gets squeaky, or if speech patterns are different (ie. there's lots of long pauses, stammering, weird intonation). Same goes for random defensive outbursts around certain questions or topics.

3. Taking a long time to respond to a question

Simply put, the truth doesn’t require a lot of prep time. This goes for texts too.

This is just another form of stalling, because we all subconsciously hate lying. Note whether your questions ever actually get answered, or if you get weirdly mismatched responses that are sorta kinda on the topic. (Note: this should be especially obvious in emails).

As with avoiding talking about a topic (or taking a really long time to give you an answer), good liars will not just change the subject—they’ll change it to you. Who cares where they were tonight, what did YOU do?

(I’m pretty sure one guy did this to me re: his entire personal life for the three months we pseudo-dated to successfully avoid the topic of his live-in girlfriend. Deception level: expert.)

6. Overuse of details about that other thing you didn’t really want to talk about

Basically, we all suck at lying and hate doing it, so we’ll talk about a million other truthful things first. Of course, if an entire story is fake, overuse of detail is an attempt at making it seem convincing. Take note of any sudden tense changes in all this yarn spinning—a jump to present from past is a hint that what you've been hearing is being made up RIGHT NOW.

Yeah no… when your boyfriend or girlfriend is telling a whole long story about how their friend got drunk and puked everywhere and they had to go back to their place and change and THAT’S why they're four hours late and obviously just took a shower, check their facial expressions and body language. Shaking their head “no” when answering affirmatively, or smirking when they're supposedly “really sorry” are tells.

8. Leaving or refusing to talk about a subject

You ever notice how cheaters that ultimately turn out to be guilty on TV and in movies are just so offended that you would even suspect that, that they won't dignify the conversation?

If that happens in real life because you said, “Gosh, you’re home late!" and your person books without even seeming particularly angry, it's a bad sign. They don't want to talk about something they'll have to lie about (hence the leaving), but they won't be able to summon any fight-fueling righteous anger through all that guilt.

To be honest… this is bad news bears. Methinks your boo protesteth too much with the “seriouslys,” “honestlys,” and “reallys.” Look for qualifiers too —"to the best of my knowledge," or "as far as I can remember."

But lets be real: you truly do know best. Experts now believe that we may be better at unconscious lie detection than we are at searching for signs, so if your gut senses something’s up, pay attention.