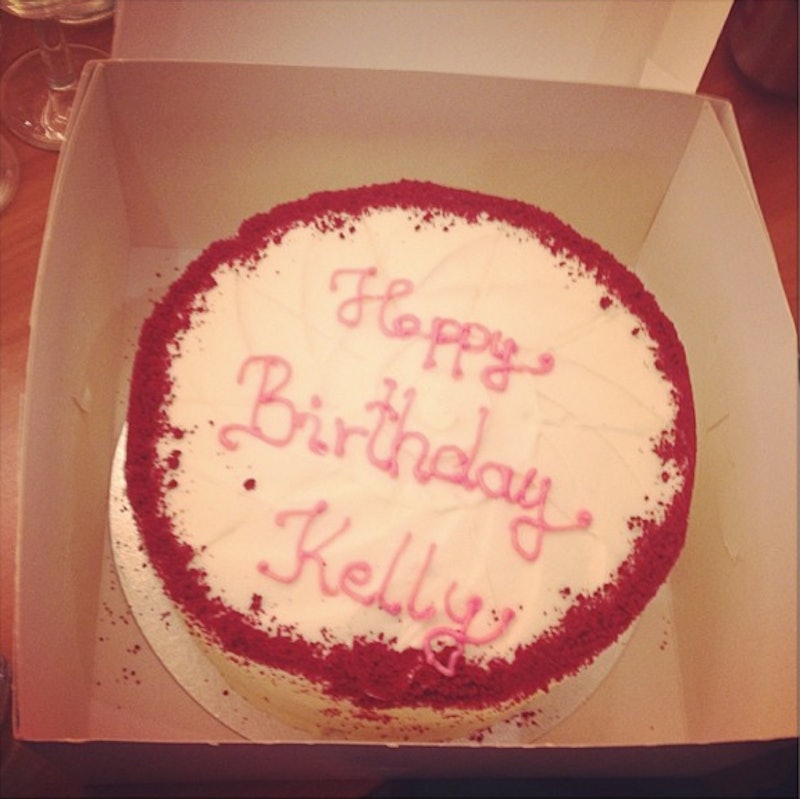 In the truly insane world of celebrities, it appears that now a cake can somehow be an insult. Lady Gaga brought Sharon Osbourne a cake on The X Factor, in honor of Kelly Osbourne's birthday, which launched a Twitter rant for the ages on Kelly's part, which is now a feud I guess? Because, ya know, what could be more offensive than a cake, right? Oh wait, no, cakes are delicious and lovely and we have no idea what Kelly Osbourne is going on about. As usual.

It's moments like these that reinforce the sad stereotypes we have about the children of strange celebrities and reality TV stars, categories that Kelly Osbourne fits into across the board.

This whole situation is just flabbergasting. Maybe its the obese little girl that sits on my shoulder and tells me to eat all the Skittles, but I can't imagine how someone buying a cake in your honor could ever be construed as an attack, let alone one worthy of telling the cake-buyer to "eat my shit," as Kelly Osbourne so generously Instagrammed at Lady Gaga.

Why eat shit when you could eat cake? Why even bring up eating shit in reference to eating cake, receiving cake, even seeing cake? There is just no need for it, but what's more, it's damn confusing. So let's lay out the series of events that lead to this "eat-my-shit because you got me a cake" situation.

1) In 2009, Kelly called Gaga a "butterface," saying she should just stop talking because she had too much 'tude. Uh... alright, then. Because it was definitely Lady Gaga with the attitude problem in this scenario.

2) Gaga responded with an open letter on her website, saying that Kelly should acknowledge how as someone who was bullied, she now bullies people for a living, and doing so isn't following what Gaga calls a "compassionate path."

3) Then Sharon Osbourne hopped on board the drama, calling Gaga all sorts of things for "criticizing" her daughter. Because anyone who has been teased knows how effective it is when Mama Bear steps in to fight your battles for you. I'd like to point out for posterity that engaging in open dialogue is generally seen as a good thing in matters of bullying but hey, maybe that's just my crazy opinion.

4) Kelly then called Gaga's fans the worst, because they were bullying her, although this was likely in answer to Kelly pulling the first punch (since this whole brouhaha is over bullying, it should be noted that telling anyone to kill themselves or that you hope they're raped is always, always a shitty thing to do). However, it seems that Lady Gaga was held personally responsible for the actions of people she has never met, which is.... interesting.

5) Lady Gaga made an appearance on The X-Factor in the UK and gave Sharon a cake in honor of Kelly's 29th birthday. She and Sharon hugged, and Sharon tweeted that she was "blown away by Lady Gaga's graciousness and performance" but Kelly wasn't pleased. Here's what happened next.

She also Instagrammed this.

And that's where we're at.

I could pick apart how totally insane each of those individual Kelly Osbourne rage-tweets is, but they pretty much speak for themselves. Also, maybe Sufjan Steven should consider drafting a second open letter, to Kelly Osbourne this time, in regards to her spelling. I too, am sure that truth is sweeter than desert, but pretty much anything would be sweeter than the desert. (Couldn't resist)

What seems to be the issue here is a hardcore case of the green monster. It's more than possible that this is all a public front, and Gaga is a massive bitch to Kelly Osbourne if/when they see each other, or this is a case of Kelly Osbourne throwing a very public temper tantrum because her cakey-wakey was on the wrong continent.

Either way, I'm just stating, whoever wants to get me a cake, on literally any continent, feel free. I will invite you to eat my cake, not my shit.

More like this
What Is Ariana Grande's Net Worth? When It Comes To Money, She Has No “Problem”
By Hugh McIntyre
Lady Gaga Delivered A Million-Dollar Performance At A Private Wedding
By Maxine Harrison
Fans React To Kelly Holmes’ “Extraordinary” ITV Documentary
By Sam Ramsden
A New ITV Doc Follows Dame Kelly Holmes’ Emotional Coming Out Story
By Sam Ramsden
Get Even More From Bustle — Sign Up For The Newsletter