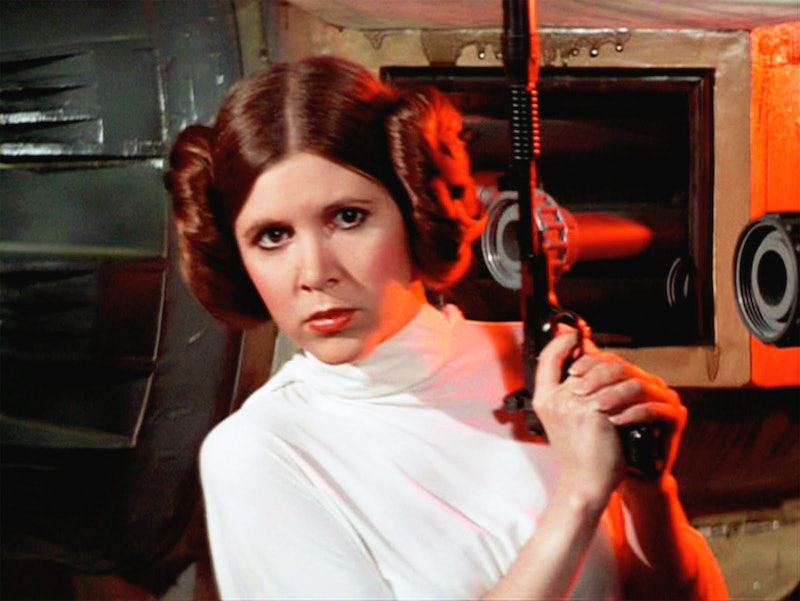 With the start of Game of Thrones Season 5 in the air and on the screen, I wasn't sure April could get much more exciting... and then it happened — the new trailer for Star Wars Episode VII arrived to absolutely blow my mind. With the resurrection of the beloved series finally at hand, now feels like the perfect time to have a Star Wars Day you'll never forget. After all, May the Fourth is here, and thanks to J.J. Abrams and a Christmas 2015 release date, Star Wars fans have more to celebrate than ever before. Finally, we can let Jar Jar Binks rest in peace (along with Episodes I through III) and look ahead to the dawn of a new era for a galaxy far far away.

Of course, there are still quite a few months between us and the eventual arrival of Episode VII. So, for the annual Star Wars celebration on May Fourth, don't just watch the series again — read something that'll give you that epic feeling, too. These 9 books will not only stoke your love of the Star Wars, but also ready you for a disturbance in the force so great it may change the world forever come Christmas.

So, Happy May Fourth, Star Wars fans: may the force and a great book be with you.

For fans of the epic saga, there's nothing quite like a Western. With literary panache and more than a little true grit, Larry McMurtry crafts a tale of love and adventure on the American frontier that ranks as one of the greatest stories ever told. If your heart still skips a beat as the camera pans over a small moisture farm on Tatooine, you'll find more than enough thrills to satisfy you come May the Fourth with Lonesome Dove.

For Whom the Bell Tolls by Ernest Hemingway

If a small band of rebel fighters taking up arms agains the imperial forces never fails to inspire you, satisfy your urge for a little righteous indignation with a turn to Hemingway's For Whom the Bell Tolls. A classic David and Goliath story set amidst the Spanish Civil War, Hemingway's raw, brutal portrait of life as a rebel may just be enough bring you right back to that frigid base on the planet Hoth and remind you of all the hardship required to bring down an evil empire.

Although Haruki Murakami's Hard-Boiled Wonderland and the End of the World takes place right here on earth, the setting conjured by the relentlessly transgressive master of genre-bending complexity is so far from a recognizable reality it may as well be a galaxy far far away. Alternating between chapters documenting a human data processor/encryption system manipulating his own subconscious and an anonymous town isolated behind an impenetrable wall, Hard-Boiled Wonderland and the End of the World is just about as strange as a Mos Eisley cantina, and equally exciting.

Herman Hesse's Nobel Prize-winning novel The Glass Bead Game follows a young adept on his quest to master the eponymous Glass Bead Game through a provocative manipulation of intellectual forces. Although young Joseph Knecht's journey doesn't involve hokey religions or ancient weapons, the force is strong with this one, and the story is sure to resonate with hardcore Star Wars fans.

As the first novel in the Canopus in Argos: Archives series, Shikasta breathes new life into interplanetary myth-making. With a heightened critical distance, Lessing offers readers a treasure trove of documents, reports, journal entries, and epistolary communiques in service of the study of the planet "Shikasta." Documenting the interstellar struggle of good versus evil, Shikasta offers up not only a deeply engaging narrative, but also a poignant allegory with rich insights into the modern history of planet Earth.

A cult classic for all the right reasons, Ender's Game brings interplanetary conflict into the classroom in a speculative future wherein young teens are instructed in the art of war as a part of an all-out assault on an alien race known only as the Buggers. Equal parts high school coming of age story and sci-fi masterwork, Ender's Game is one YA classic no Star Wars fan should miss.

The Circle by Dave Eggers

For a unique look at the technologically enhanced future most closely at hand, and the evil empire forming in our own dearly beloved Silicon Valley, Dave Eggers incisive contemporary satire The Circle is both shrewd and sinister. Taking up residence on the edenic campus of a multinational technology behemoth devoted to changing the world, Eggers slowly chronicles the death of privacy and the end of life as we know it. If you've ever wondered what might have happened to prompt the earliest origins of an Imperial Senate, perhaps The Circle will give you some ideas.

The Martian by Andy Weir

In a world where humans have made it to Mars but not yet mastered the art of extraplanetary habitation, one lone astronaut is stranded on the red planet and Weir's incomparable novel takes up the tale from there. Bold, funny, and slick with a wit even a wookie could appreciate, The Martian comes close approximating the iconic humor of the Lucas films in an all-too-familiar outer space setting.

The City & The City by China Miéville

Part police procedural, part mind-bending fictional masterpiece, The City & The City is a daring and provocative novel that questions the very nature of place. With all the action and adventure of Episodes IV and VI, and the meditative richness of Episode V, there's a little something for every Star Wars fan within the pages of Miéville's masterpiece of murder, investigation, and perception.

More like this
Netflix Shut Down 'Bridgerton' S3 Rumours About A “Very Dark” Storyline
By Bustle
We’ve Entered The Hot Boy Reader Era
By Samantha Leach
Jessica Simpson On The Time She Was Pursued By A Backstreet Boy & An *NSYNC Member
By The Editors
Bill & Frank’s 'The Last Of Us' Episode Has Twitter Emotionally Wrecked
By Alyssa Lapid
Get Even More From Bustle — Sign Up For The Newsletter
From hair trends to relationship advice, our daily newsletter has everything you need to sound like a person who’s on TikTok, even if you aren’t.