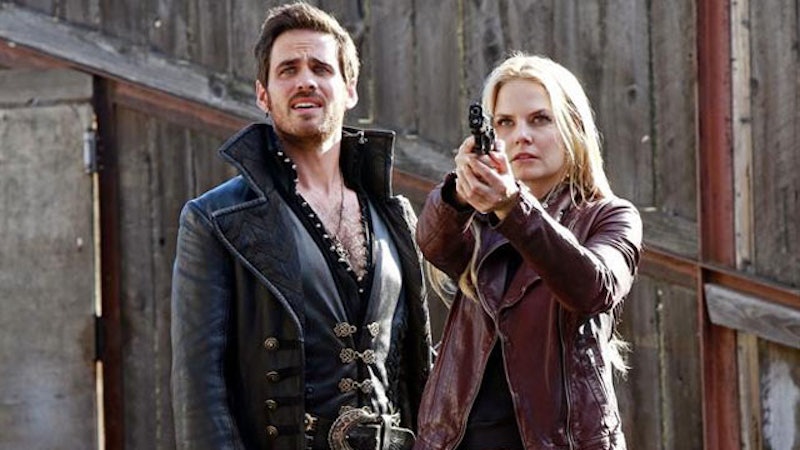 You've got to be quick to keep up with what's happening on Once Upon A Time at any given moment. The plot is constantly changing, adding new details and revealing new and surprising connections that can make your head spin if you don't pay very close attention. One thing's for sure: nothing is for sure in Once Upon A Time's Storybrooke. Alliances can dissipate without word and those who were once enemies can indeed become allies. Pairings in the OUAT don't tend to last very long, generally; love sometimes just isn't enough to save a relationship — or, in worst cases, a life. Thankfully, the town's residents have been through enough to realize you've got to make the most of your friends while they're still around.

Storybrooke's pairings, both romantic and platonic, are incredibly powerful. When teamed up, they can do amazing things, changing the course of history with what seems like the snap of a finger. From Emma and Regina's new-found friendship to the dark secrets held by Snow White and Prince Charming, the town's heroes have their own strengths and weaknesses, both of which can be their downfall. But which fairy tale duos have the most potential to achieve greatness — or great harm? Here's my list, from most powerful to least (though even the least powerful couples could still prove deadly, so beware!).

If there's one thing we've all learned in the past four seasons of Once Upon a Time, it's that information is power. On more than one occasion, Belle's dedication to her beloved books in the library have saved the day, and I have a pretty good feeling that's going to happen again in the future. Time will tell!

Rumple is formidable in his own right, but he obviously felt Maleficent was an important part of his big plans to take over Storybrooke, meaning she must have powers he doesn't. She also has a motive: her child, the only thing she ever really wanted, has been taken from her. God help anyone who gets in their way.

Ah, new love. Emma and Hook may only recently have decided to give things a go, but Hook has fallen HARD and will do anything to keep Emma safe. Emma, being as stubborn as she is, will charge head-first into danger if it means saving the residents of Storybrooke. While their romance may not get a chance to truly flourish long term, their dedication — Hook's to Emma and Emma's to justice — make them a force to be reckoned with.

This is a relatively new pairing, and one that we haven't even seen come fully into fruition yet, which should tell you just how dangerous they really are that they're even appearing in this list. Zelena is Regina's sister and she's got a serious grudge to bear, not to mention incredible dark magic skills. Combined with Rumple, who's desperate to get his happy ending by any means necessary, we may be in for some serious trouble.

It was Henry and that book of fairy tales that started this whole thing to begin with, not only mapping out the stories of our most beloved characters, but also providing answers about what's to come and what's happening as we speak. He's learned the book inside and out, and with the knowledge he's gained from it — not to mention the new elements he's unleashed by locating and freeing the Author — are serious game changers.

So close to the top of the list? Yeah, that's right. While Snow and Charming were previously thought to be full of light and love, this season has shown they have a much darker side than we ever could have anticipated. While the full details of what they did to Maleficent aren't known to all the residents of Storybrooke — and while I do generally believe they mean well — the couple's desperation to stay together and protect what they care for at all costs could prove deadly for anyone or anything that might get in their way.

Regina & Emma used to be enemies, and for good reason. The Evil Queen and the Savior were never going to get along, were they? However, Regina's recent change of heart and attempt to embrace the light instead of the dark has brought the pair closer together, as has co-parenting Henry. Combined, their powers can change Storybrooke completely, if only they know how to harness it.