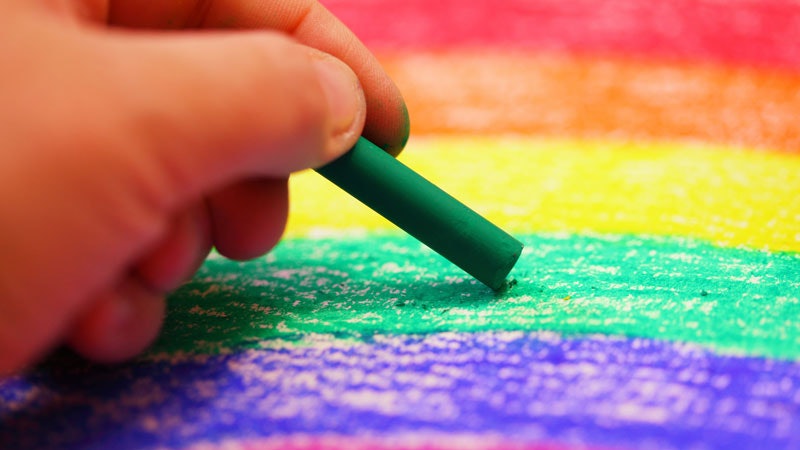 After reading Maggie Nelson's Bluets, an experimental lyric essay that explores her fascination with the color blue, and also acts as eulogy for a past relationship, I've become a disciple of this complex, passionate writer — it's hard not to when you read just a word of hers. That's why I was so excited to pick up her new book The Argonauts. One of the big questions she asks in the text is, "What is queer theory?" This book-length essay attempts to normalize the concept of queer families, rejects the habit of defining identifies using the limiting tools of language, and investigates the different forms and personas that motherhood can take.

The Argonauts was my introduction to queer theory. Nelson familiarized me with gender studies philosophers like Judith Butler and Eve Sedgwick, whom I had only encountered briefly before; the ideas about gender and sexuality I read in The Argonauts act as a solid primer for further study. For someone interested learning about the theories that help define the queer movement, Nelson offers a guidebook to help new initiates navigate the various thinkers that populate this continually evolving sphere. (Spoiler alert: It's completely fascinating.)

Here are 10 things Nelson taught me about queer theory, which you'll definitely be interested in, too:

"Same-Sex Marriage" Is a Misnomer

Nelson laments that she doesn't know "many — if any — queers who think of their desires as being 'same-sex.'" She notes that "whatever sameness" she encounters in her relationships with women is not that of gender, but rather "the shared, crushing understanding of what it means it live in a patriarchy."

Pregnancy Is a Radical Act

Carrying a baby "profoundly alters one's 'normal' state," writes Nelson, which she asserts is an "inherently queer" experience. She takes the association even further when she asks how pregnancy can be so "profoundly strange and transformative," yet also "symbolize or enact the ultimate conformity." She proposes that like the fact that her partner Harry identifies as "neither male nor female," pregnancy can act as a "two for one."

Mothers Come In Many Forms

Nelson pays tribute to "the many gendered-mothers of my heart," especially Eve Sedgwick, and the poets James Schuyler and Alan Ginsberg. As Nelson notes, queer folks have a "long history of constructing their own families — be they composed of peers or mentors or lovers…" Any person can take on these roles, no matter their identity or relation to the other family members.

"How can the words not be good enough?" wonders Nelson, a frightening prospect for a writer. But even attempting to make airline reservations or negotiate with the human resources department at work has proved nearly impossible for Nelson, who often finds herself ashamed of the people "who keep making all the wrong presumptions … but who can't be corrected because the words are not good enough."

At the start of their relationship she became an expert at "pronoun avoidance," even trying to Google Harry to covertly discover if there was a preferred pronoun she should be using. Later, she recalls one of her first gender studies professor's refusal to come out to her class. Her peers were frustrated, but Nelson "has always sympathized with those who refuse to engage with terms that feel like more of a compromise or a distortion than an unbidden expression." Labels that attempt to divide up queer folks don't allow for them to just be, to exist without definite categorization.

The solution, writes Nelson, "is not to introduce new words (boi, cis-gendered, andro-fag) and then try to reify their meanings (though there is power here) … One must also become alert to the multitude of possible uses, possible contexts…" In the "menacing pressure to take sides," Nelson would rather "refuse terms" that don't serve to explain or do justice to someone like Harry's identity.

Speaking of Which, the Word "Queer" Encompasses More Than Sexuality

Early in the book, Nelson introduces readers to queer theorist Eve Sedgwick, who wanted "'queer' to hold all kinds of resistances … that have little or nothing to do with sexual orientation." Wrote Sedgwick, "Queer is a continuing moment, movement." And in Nelson's words, the term should be "a perpetual excitement, a kind of placeholder" that can accommodate ever-evolving definitions.

It's Time We Rethink What We Mean When We Say "Heteronormative"

There is a mug in Nelson's kitchen printed with a picture of her family: Harry, a pregnant Maggie, and Harry's son, all dressed up to go see the Nutcracker. One day, a friend finds the mug and says, "I've never seen anything so heteronormative in my life." Nelson rightly questions why the scene on the mug was restricted to one that only a straight family could enact, proposing that there is still a "presumed opposition of queerness and procreation," and that as more queers have kids, the opposition will fade away and won't be missed.

On That Note, Maternity Is Still Excluded From Some Definitions of Queerness

After her baby was born, Nelson and her partner took him to a friend's burlesque show. He was fast asleep, strapped to her chest, but the bouncer still denied them entry because adults might see the baby and feel that their "adult night out" was being disrupted. Nelson isn't arguing that she should be able to take her baby wherever she wants without restriction, but she does point to feminist writer and professor Susan Fraiman, who described a "heroic gay male sexuality as a stand in for queerness which remains unpolluted by procreative femininity."

It's an interesting idea because it suggests that feminine queers and queers who choose to procreate — indeed any identity and its expression that might fall under traditional normative categories — might still be left out of the movement at large, when actually queer family making is an "umbrella category under which baby making might be a subset." On the other hand, Nelson also points out that some people still feel nervous about "the rise of homonormativity, and its threat," to the inherent radicality of queerness.

But No Type of Binary (Not Just Gender) Works

Nelson cites a VICE interview with the visual artist Catherine Opie, who sometimes practiced self-mutilation in her photographs. Opie explains that people found it difficult to imagine she could switch between the roles of radical artist and mother. "…Becoming homogenized and part of mainstream domesticity is very transgressive for someone like me," she says.

Nelson stresses that it's the "the binary of normative/transgressive that's unsustainable, along with the demand that anyone live a life that's just one thing." She reminds us that "nothing we do in this life need have a lid crammed on it, that no one set of practices or relations has the monopoly on the so-called radical or the so-called normative."

Equating Sexual "Deviance" With Queerness Is a Seriously Outdated Attitude

Nelson's most powerful point comes when she explains that though trans* works as "shorthand," the narrative it evokes is that one is traveling between "two fixed destinations." She acknowledges that this term is "profoundly useful for some" but that it is useless for people like Harry who tells curious strangers, "I'm not on my way anywhere." Nelson cites philosopher Beatriz Preciado, who wrote, "I do not want the female gender assigned to me … Neither do I want the male gender that transsexual medicine can furnish … I don't want any of it."

How can people — queer folks and their allies — accommodate the fact that sometimes "irresolution is okay"? Nelson provides a simple and striking answer: "The best way to find out how people feel about their gender or their sexuality … is to listen to what they tell you and try to treat them accordingly, without shellacking over their version of reality with yours."

More like this
Jujubee’s Humble Reminder
By Sam Ramsden
Megan Barton-Hanson On Bi-Visibility & The Need For LGBTQ+ Love Island
By Sam Ramsden
16 Novels That Paint A Realistic Portrait Of Abortion
By K.W. Colyard
Aesop's Queer Library Is Open
By Tomi Otekunrin
Get Even More From Bustle — Sign Up For The Newsletter