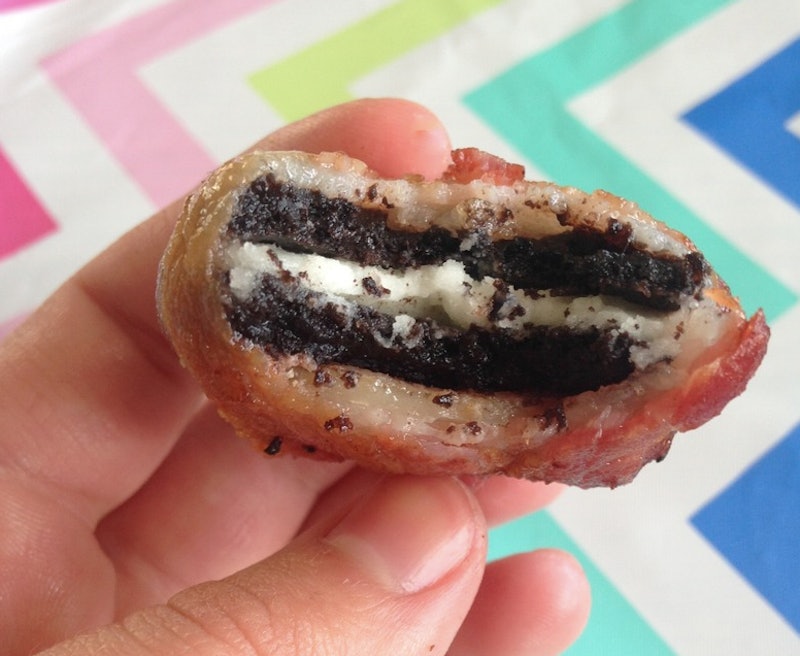 When I first heard about this bacon-fried Oreo recipe by genius food blogger Oh Bite It, I thought these nuggets of bacon-wrapped goodness were too good (and maybe a little too weird) to be true. I mean, that's a lot of flavor to take in all at once, and even as an avid food lover, I knew these treats weren't for the faint of heart. But being the intrepid kitchen adventurer that I am, I knew I had to try this recipe for myself, so I stocked up on thick-cut bacon and Mega Stuf Oreos, heated up my frying pot, and, not much longer after that, found myself teeth-deep in the gooey, crispy, sweet-and-salty goodness that is my new favorite dessert. You guys? These are so. Good.

This unexpected flavor combination (crispy, salty bacon and sweet chocolate cookie) and the even more unexpected results got me to thinking: what else can I wrap in bacon? In my life up until this point, I've drooled over bacon-wrapped scallops, munched on dates dressed in bacon, and dined on bacon-fried asparagus. I've tried all the traditional foods, so I was ready to get a little weird. The pork-wrapped lunchbox treats had me feeling brave and invincible. I mean, what could possibly go wrong? Bacon goes well with everything, right? That's the theory I decided to put to the test.

Marshmallows, mac and cheese balls, cannolis, pizza rolls — nothing was off limits as I began my experiment to see if bacon could improve some of my favorite foods. Some recipes were total wins, others were a little more... avant-garde, but for the most part, it was all delicious. From sun up to sun down, and even for after hours, here are 14 food items wrapped in bacon for your cooking and eating pleasure.

The recipe that started it all! I'm telling you, these are amazing. If you still have doubts, it's time to settle them. Just look how easy it is!

1. Wrap one piece of bacon around each Oreo. Secure with a toothpick.

3. Cool and dry on a paper towel. Serve.

Though I am sure these are great with any kind of Oreo, the Mega Stuf are decently sized and have the most filling, which is, after all, everyone's favorite part. If you're going to wrap anything on this list in bacon, make sure it's these.

Camping isn't complete without cold beers, big bonfires, and s'mores. Add bacon to the mix to spice up the old campfire favorite, but beware of thieving forest creatures. These s'mores are that good.

1. Wrap one piece of bacon around a marshmallow, vertically. Use a marshmallow roasting stick to secure the bacon, and roast to your liking.

S'mores are amazing, but I never knew they were missing a fourth ingredient the whole time: bacon. Do yourself a favor the next time you're camping, and don't forget to wrap it up.

Gooey meets crunchy in this breakfast combo that's easy to make, and even easier to eat.

1. Wrap one slice of bacon around each cinnamon roll. Secure with a toothpick.

2. Place rolls on a cooking rack on top of a cookie sheet. Cooking on top of the rack allows for bacon grease to drip off while cooking, but if you do not have one, you can bake directly on the cookie sheet.

The sweetness of the icing is complemented by the saltiness of the bacon, which makes for a fantastic paring in this three-step recipe. Warm and melty, these buns are bites of breakfast heaven.

Mozzarella sticks are the perfect food for watching a sports game, talking through a bad break up, or pigging out at midnight. They become an even more perfect food when they're wrapped in bacon and given a salty, crunchy make-over.

1. Beat together egg and water to make egg wash.

2. Brush each cheese stick with egg wash. Coat each with panko crumbs.

3. Wrap a piece of bacon around each stick. Secure with a toothpick.

5. Cool and dry on a paper towel. Serve.

Excuse me while I finish licking my fingers. The way a piece of bacon perfectly fits around a cheese stick makes me think this was a pairing made to be.

As if mac and cheese couldn't be any better, wrap it in bacon, deep fry it, and make it bite-sized. Be prepared to have your mind blown. Makes about 24.

1. In a large pot, melt butter and add in flour and salt.

3. Remove from heat, and add in cheese. Mix until creamy.

4. Add cheese mixture to cooked pasta. Stir until pasta is evenly coated. Let it sit until it's cool enough to handle.

5. Mix in panko crumbs, and make small balls out of the mixture, a little larger than a ping pong ball.

6. Wrap one piece of bacon around each ball. Secure with a toothpick.

8. Cool and dry on a paper towel. Serve.

Your tastebuds will have to learn a whole new happy dance after trying these drippy, cheesy bacon balls. A guaranteed crowd-pleaser.

Pizza in the morning, pizza in the evening, pizza at suppertime. When pizza's on a bagel.... wrap it in bacon, cook it, and eat it with no sense of shame.

2. Wrap each mini bagel half with one slice of bacon. Sprinkle with more cheese if desired

3. Place bagels on a rack on top of a cookie sheet.

One of the few baked options on this list, the bacon-wrapped pizza bagels are full of flavor. A two-bite treat that is crumbly on the outside and melty on the inside.

If you've ever wanted to try bacon weaving, now is your chance. Ditch the standard puff-pastry that holds your quiche together, and use a bacon wrap instead. It's a filling, fluffy breakfast party in your mouth. Makes 6.

1. Cut each slice of bacon in half.

4. Place each bacon weave in a cupcake cup. Fill cups 3/4 way up with egg mixture. Fold bacon over the top.

A bit on the heavy side, this bacon-wrapped quiche cupcake is a meal in itself. For a less-greasy alternative, try partially cooking the bacon before weaving the pieces into sheets.

Remember when French toast stick day at school was the best thing ever? This twist on the cafeteria classic adds a little crunch to a traditionally fluffy treat. Serves 4.

2. Slice each piece of bread in thirds, horizontally. Dip each piece in the egg batter.

3. Wrap one piece of bacon around each egg-dipped piece of bread.

4. Grill each piece in a buttered pan on medium-high until each side is crispy and golden brown. Serve with maple syrup for dipping.

These were my favorite bacon-infused breakfast experiment. They were crispy on the outside, and soft on the inside, and a perfect addition to any brunch spread.

There are dozens of varieties of fries out there: sweet potato, tater tots, curly fries, wedges — the list goes on. But none of those fried spuds compared to the deep-fried wonder of bacon-wrapped fries. Makes 4 servings.

1. Soak potatoes in cold water for 1 to 4 hours. Peel and cut into wedges. Dry slightly on a paper towel.

2. Mix salt and flour. Toss wedges in the mixture.

4. Wrap 1/2 piece of bacon around each potato wedge, and secure with a toothpick.

6. Cool and dry on a paper towel. Salt, and serve.

These were a bit time consuming, and the fries easily came apart in the fryer. If the oil is too hot or there are too many fries cooking at once, the bubbles in the oil can undo the bacon wrap. Still, it's a good snack option for someone with a serious salt craving.

When it comes to junk food, chips are the go-to, but when you're looking for something to wrap in bacon, you might want to go with a healthier option. When I'm craving potato chips but don't have the calories to spare, I reach for Snap Pea Crisps, which, as it turns out, are easy to wrap in bacon. Makes 4 to 5 servings.

1. Cut each piece of bacon into four pieces.

2. Wrap one piece of bacon around each snap pea crisp. Secure with a toothpick.

4. Cool and dry on a paper towel. Salt, and serve.

Crisp and salty, this snack is nearly irresistible, and a sure way to eat a lot of bacon quickly. Great on their own, these would also be a fun alternative to croutons on a salad.

Why is it that stuffing is only appropriate to eat once a year? Help start a Thanksgiving-snack revolution with tiny morsels of mom's home cooking, bacon-fried and fantastic. Makes 12.

2. Mash a potato with a fork. Add butter, garlic salt, cream cheese, and milk. Beat with an electric mixer until creamy. Set aside to cool.

3. Melt butter in a medium sauce pan. Add celery and onion, and cook until tender.

4. Add in water or chicken broth, and boil. Remove from heat and add half of the stuffing package. Mix lightly. Let cool.

6. Make small balls out of the mixture, a little larger than a ping pong ball.

7. Wrap one piece of bacon around each ball. Secure with a toothpick. Fry in oil heated to 360° until browned and crispy.

8. Cool and dry on a paper towel. Serve.

This was one of the items on the list that took a bit longer to make, but the effort was worth the result. These are a great way to enjoy the taste of the holidays any time of year, but they will be especially appreciated when made from Thanksgiving leftovers.

If bacon were a fruit, it would be pineapple, and just like bacon, the sweet fruit goes with everything. The next time you're grilling for a cookout, spice up your skewer selection with this citrusy-bacon treat.

1. Drain each can of fruit, and lay everything out on paper towels to dry slightly.

2. Wrap 1 to 2 slices of bacon around each piece of fruit. Secure meat onto the fruit while sliding it onto a skewer, 3 to 4 pieces per skewer.

3. Drizzle each skewer with honey. Grill at 400° until brown and crispy.

4. Serve on the skewer, or add as a burger topping.

Though these bacon-wrapped fruits fell apart a bit easily, they are among the top three best tastes on the list. Juicy and crispy, it's like you're at a Hawiaan luau.

Because I'm Italian and I grew up outside of Boston, I look for any excuse to make cannolis. And bacon wrapped cannolis? Don't mind if I do.

1. Mix together ricotta, sugar, syrup, vanilla extract, and chocolate chips. Cool in the fridge for at least 1 hour.

2. Lay down a slice of bacon. Center a won ton wrapper, in the shape of a diamond, on top of a bacon slice.

3. Add a spoonful of filling to the center of the won ton wrapper. Fold the bottom corner up first, followed by the right corner and left corner. Fold over the right side of the bacon. Fold over the top corner, and seal it shut with water. Tuck in the remaining loose bacon. Secure with a toothpick.

5. Cool and dry on a paper towel. Serve.

The best foods are the messiest ones to eat, and these bacon-fried cannolis are no different. Sticky, creamy, sweet, and savory — what more could you be looking for in a dessert?

Bacon and chocolate go together like peanut butter and jelly, like thunder and lightening, like... Beyonce and Jay-Z. This junk food hybrid brings their relationship to the next level.

1. Wrap one piece of bacon around each Swiss Roll. Secure with a toothpick.

3. Cool and dry on a paper towel. Serve.

It's like biting into a bacon-infused chocolate cake: spongy and creamy with little bits of salty crumbles.