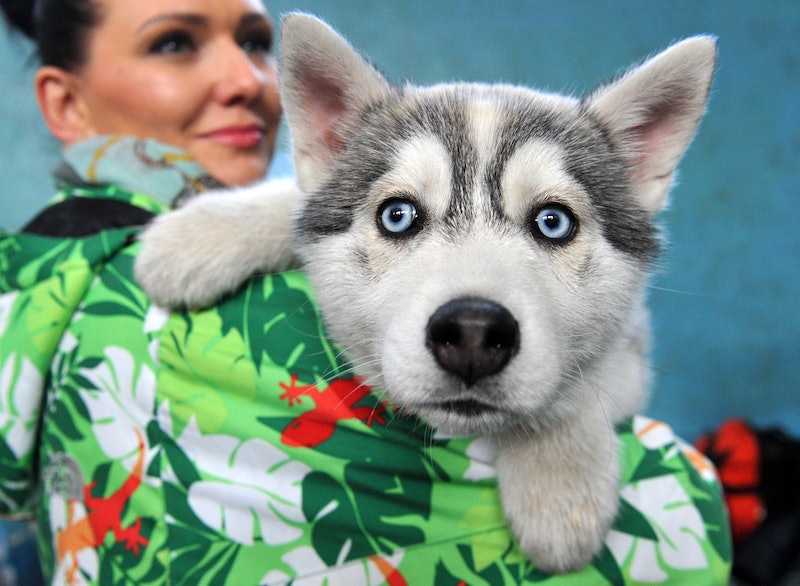 Guess how long humans have had domesticated dogs around, as pets and working animals? Somewhere between 9,000 and 34,000 years. Lassie's hardly a flash in the pan — and over the course of that centuries-long relationship, special bonds have developed; of dependency, social organization, and, it turns out, health benefits. Going down to the shelter for a mutt isn't just a matter of having something furry to cuddle and toilet train: the science says, pretty clearly, that owning a dog is seriously good for your physical and mental health over the course of your life, particularly if you suffer from stress or depression.

It's clearly not something that's gone unnoticed by humans. Dogs are enormously popular as pets around the world, though different breeds have regional popularity: in China, for instance, native-bred temple dogs like the Chow Chow and Tibetan Mastiff have huge status, while Americans love their imported German shepherds and labradors. The good news? It looks like the health benefits are spread across all breeds — or at least studies haven't detected any differences. In 2012, 83.3 million U.S. homes owned at least one dog; to put that in perspective, 133 million Americans voted in the last election.

So if you're thinking about getting a dog, the up-ticks in your mental and physical health should be a point in their favor — though that shouldn't be all the rationale behind snagging one. For one, the myth that dogs force you to exercise and keep you from obesity actually isn't true: 17 percent of all dog owners who walk their own dogs are still obese. So make sure that an impassioned plea for a house dog has the right science behind it.

1. They Boost Your Oxytocin Levels With Only Their Eyes

Ever wondered why gazing into your beloved pooch's eyes makes you feel all warm and fuzzy inside, and why they seem so willing to continue the staring contest (until they lick your nose, or spot a squirrel)? It turns out that this mutual gaze is a pretty serious bonding exercise.

Japanese researchers have published a report in Nature magazine reporting that a good long stare into the eyes of your own dog unleashes a huge hit of the brain chemical oxytocin, the so-called "hormone of attachment" or "cuddle chemical". And not just in you — in your little dog, too. Both humans and dogs increase their oxytocin levels through romantic gazing into one another's peepers. Oxytocin solidifies relationships and makes us more generous. So this is a definite mental health benefit.

2. They Help With Depression

Therapy dogs are basically old news. We now have therapy rabbits, therapy goats, even therapy Shetland ponies. The capacity for animals to calm humans down and boost mood is a pretty well-established one –—but dogs bring something special to the mix.

Their strong bond with humans (see point 1) evolved over centuries of domestication, and has resulted in good vibes all round. The oxytocin we've already met is being promoted as an experimental way to help with mood disorders like depression, but other studies have discovered that time with a dog relieves loneliness and isolation, and that dog owners are less likely to experience depression in the first place. That combination of unconditional love and slobber seems to be good for serotonin levels.

3. They Boost Your Immune System

This is an intriguing one: science has posited that having a dog or cat can actually boost immune systems and help you fight off diseases. Part of this is lifestyle-based — a healthy, active person will have a higher immune system than a less healthy person — but several studies have revealed that just having a dog in the house was a boost in and of itself.

One, from 2015, is aiming to prove that the biology in dog saliva from a sloppy dog kiss is actually system-boosting for humans. While results aren't in yet, there's definite evidence from a 2012 study that having a dog track dirt into the house raises the immune systems of children, who are less likely to need antibiotics or suffer from common viruses.

If you feel like your dog is basically your therapist, you're not on your own. They're so good at calming us down, they can actually be better stress relief than your boyfriend. No, seriously: a study showed that, when given a stressful task to perform and given a choice of companion (partner, dog, or both together), people were significantly calmer about it when they just had the dog. (Presumably because the dog doesn't ask irritating questions or try to arrange the IKEA screws by height.)

Again, this is partially a lifestyle-dictated health benefit, but it's also part and parcel of a dog's stress-relieving qualities. A famous study from 1988 showed that just interacting with and petting a dog briefly significantly lowered blood pressure — and if you talked to the dog, your blood pressure was far lower than if you tried to relieve your stress by talking to a person. Dogs are supposed to be fantastic for the heart in general: they're associated with a lower risk of heart disease by the American Heart Association itself.

6. They Can Detect Cancer

The powerful nose of your average canine isn't just great for sniffing out truffles (and the bone you thought you'd hidden in the garbage) — it's also a particularly powerful weapon in medical research and detection.

So-called "canine cancer detection" is actually less sophisticated than it sounds; it literally involves letting specially trained dogs sniff the urine and breath of people who may have cancerous tumours. Yep, cancer has a smell — and dogs are sophisticated enough noses to sniff it out. A study from 2011 found that medical dogs could detect lung cancer in breath, even in early stages, with an accuracy of 93 percent. But it's not an innate quality — so don't breathe on your dog regularly expecting them to notice if anything's wrong.

More like this
An Honest Review Of The TikTok-Famous WalkingPad
By Kaitlyn Wylde
How To Protect Your Digital Privacy If You Need An Abortion Post Roe v. Wade
By Kaitlyn Wylde
I'm Going Off My Bipolar Meds to Try to Get Pregnant
By Anonymous, as told to Anna Goldfarb
5 Crystals To Lower Your Anxiety
By Megan McCarty
Get Even More From Bustle — Sign Up For The Newsletter