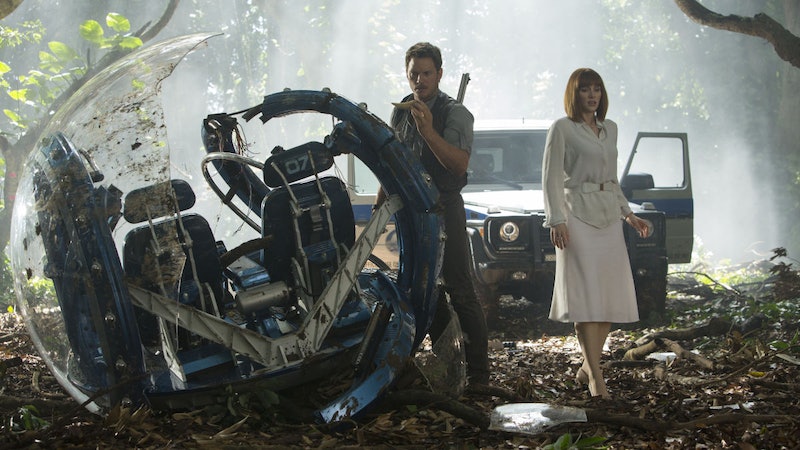 Up until this point, not much has been revealed about the highly- anticipated Jurassic World. However, Universal has just released the new full-length global trailer for the film and I must say, it looks amazing! Instead of the cut and dry formula that usually makes the animal the antagonists to mankind, the film seems to be a commentary on what occurs when humans try and confine animals into man-made habitats.

Did I mention the star of the film is our favorite Parks& Recs/Guardians of the Galaxy star Chris Pratt? Oh yes, Chris Pratt is blesses us with all of his glory in the latest installment of the classic Stephen Spielberg films. Apparently, this fourth installment to the saga was scheduled to be released in 2005, but was pushed back for a decade. Yikes. With all of the secrecy and hoopla surrounding the film, it looks like Universal waited for the perfect time and for their perfect star to deliver in a very big way. The dinosaurs are super badass and the scenery looks lush and beautiful. Oh, and did I mention Chris Pratt? Here are some of the most exciting moments from the trailer.

Chris Pratt's character Owen Grady is apparently a dinosaur whisperer. There is nothing more enticing then seeing our beloved @prattprattpratt care for large terrifying animals.

The Wizarding World of Harry Potter needs to ready itself for some fierce competition. Jurassic World boasts some amazing real-life attractions from a Dino Safari to a jaw-dropping aquarium display.

Bryce Dallas Howard Being A Badass

Ms. Howard was amazing in 2011's The Help and I've been checking for her ever since. It will be fantastic to see her as Claire Dearing, one of the only women on earth seemingly unmoved by Chris Pratt's charm.

In movies, anytime scientists begin tinkering with genetics, all hell is certain to break loose. Jurassic World will certainly be no exception.

A scientist at Jurassic World gloats, "She was designed to be bigger than the T-Rex." And big she is. After gobbling up her sibling, Madame Dino begins wreaking havoc on the entire park. I just love a strong female villain, don't you?

Explosions are always the pillar of a fantastic thriller film and Jurassic World is no exception. From fiery torpedoes, to helicopter crashes, this film seems to have it all.

It's amazing how far technology has come since the first film was released in 1993. Even still, consider how much more incredible this film will look now, versus how it would have looked if it had been released in 2005.

Jurassic World will be released on June 12th. Check out the full length trailer below:

More like this
Everything To Know About The ‘Black Adam’ Movie So Far
By Grace Wehniainen
Yes, You Do Know The Song From The 'Black Panther: Wakanda Forever' Trailer
By El Hunt
Everything You Need To Know About ‘Black Panther: Wakanda Forever’
By Bustle Editors and Radhika Menon
The 'Nope' Ending, Explained
By Morgan Leigh Davies
Get Even More From Bustle — Sign Up For The Newsletter