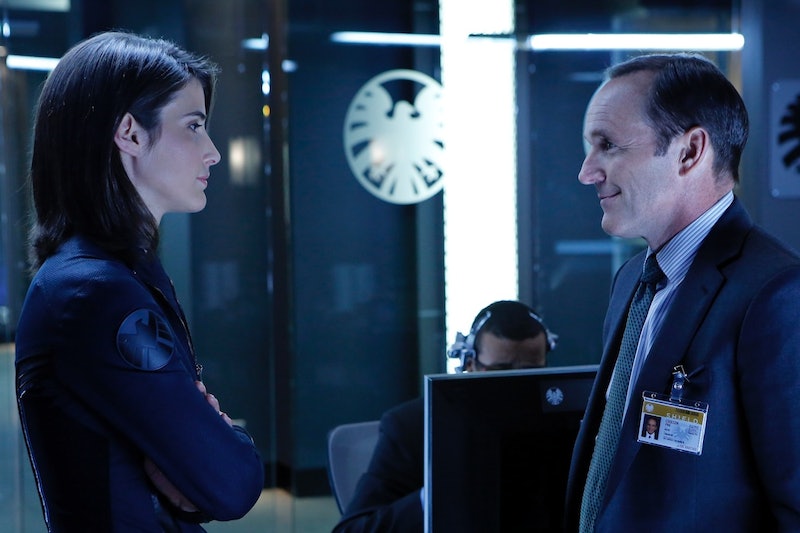 In this new world of epic franchise crossovers, no one does it better than Marvel. It has multiple movies, shows, and characters all weaved in and out of a shared universe, frequently interacting but never overstaying their welcome. Now just in time for the release of The Avengers: Age of Ultron, their small screen counterpart is getting some crossover love. Cobie Smulders returns to Agents of S.H.I.E.L.D . as Agent Maria Hill in an upcoming episode and there couldn’t be better news for fans of the show. (Well, except Ward coming back in a larger role. I miss that guy!) Any Hill appearance on S.H.I.E.L.D. is a treat, not just because of how fantastic Smulders is in the role (her reaction-shots alone are legendary), but because she only shows up when the action is really kicked into high gear. She was present in the pilot for the assembling of the team, and didn’t return until Episode 20 “Nothing Personal” when S.H.I.E.L.D. was literally falling apart. It’s anyones guess as to what brings her back this time, but I believe Hill will return to S.H.I.E.L.D. on Fury’s orders to help Coulson regain control of the organization.

It would make sense. As the former Assistant Director of S.H.I.E.L.D., Hill has always followed Fury’s orders and just because she isn’t technically an agent any longer doesn't mean that has changed. In fact, Fury is the one thing Coulson and Hill really have in common, and even though I am clueless as to what Theta Protocol is, I’d bet Fury is involved in it. Fury left S.H.I.E.L.D. and all of his plans in Coulson’s hands and that’s now being threatened in a really serious way.

Though Fury hasn’t been seen or heard from in a while (no huge surprise there, he is supposed to be dead after all), he very likely sees the heat Coulson is facing and wants to send his best asset to help him out: Maria Hill. If I'm right, Hill will be a huge help in preventing a coup and getting S.H.I.E.L.D back on track. Respected in the S.H.E.I.L.D. world, she may even be able to work with Agent Gonzalez — or kick his butt. Either way, it will be fun to watch.

Though not yet highly publicized, to anyone paying attention, Hill's appearance shouldn't come as a surprise. She was mentioned briefly as the Agent who approved May’s transfer from the field to desk duty after the events in Bahrain. Hopefully, this means we will get more May/Hill scenes together and — dare I even hope — more backstory on her relationship with Coulson. As far as I’m concerned, the more Hill the better.

Yes, she serves as a tie in to the larger Marvel Cinematic Universe, but she has also become vital to the plot of Agents of S.H.I.E.L.D. and a valuable part of the show. Whatever ends up happening, I hope this continues the trend of Hill showing up just when she’s needed most.