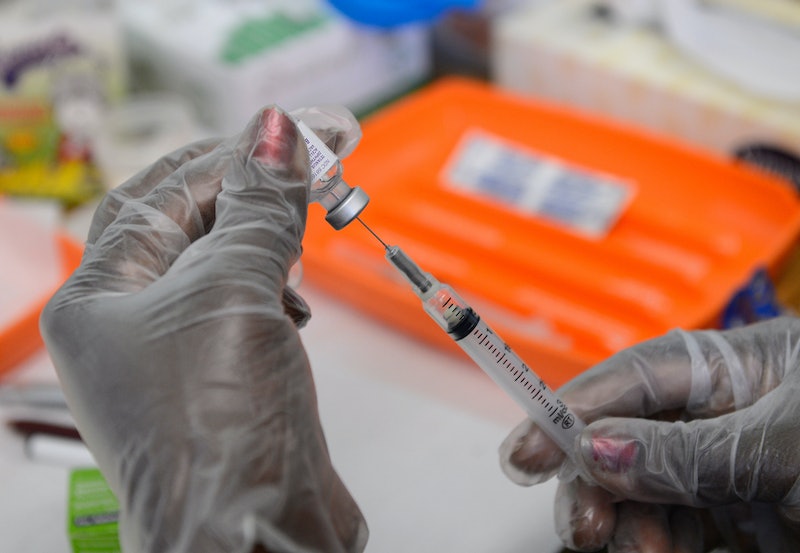 It turns out that the HPV vaccination might not protect women in equal measure: A new study from Duke University's School of Medicine suggests that Gardasil and Cervarix don't protect against the types of HPV most commonly found in black women. In a study of 572 women who showed abnormal Pap tests — 280 of which were African-American, 292 Caucasian — researchers studied the HPV subtypes they found; HPV is considered an indicator of future cervical cancer. It turns out that black and white women tend to have different HPV subtypes — and the vaccine protects against the ones more often found in white women.

Right now, current HPV vaccines mainly target the subtypes 16 and 18. They're the ones that most commonly cause cervical cancer, but they're both also most frequently found in Caucasian women — they only show up half as often in African-American women. Gardasil also targets strains 6 and 11, but neither are as common in either group. It could help explain why, despite the vaccine, African-American women are 20 percent more likely to be diagnosed with cervical cancer. Or, given the drug's relatively recent entrance onto the pharmaceutical market, it also raises serious red flags for vaccine manufacturers and the breadth of such medications' coverage.

There is some good news: a new HPV vaccine is in the third phase of clinical trials, and is intended to target seven other cancer-linked subtypes. Plus, recent study covering one million girls in Denmark and Sweden — the largest of its kind — gave substantial indication that the HPV vaccines are totally safe, and not linked to health problems. Shame they're not as effective across the board as we'd hoped...

More like this
This Company Will Send STI Tests Right To Your Door
By Lexi Inks
Iran Has Issued A Death Sentence Over Mahsa Amini Protests
By Catharina Cheung, Darshita Goyal and Maxine Harrison
MOBO Awards Found Kanya King On The Woman Whose Grit & Determination Spur Her On
By Kanya King
Amanda Gorman Shared A Powerful Message On Meghan Markle’s Penultimate Podcast
By Darshita Goyal
Get Even More From Bustle — Sign Up For The Newsletter