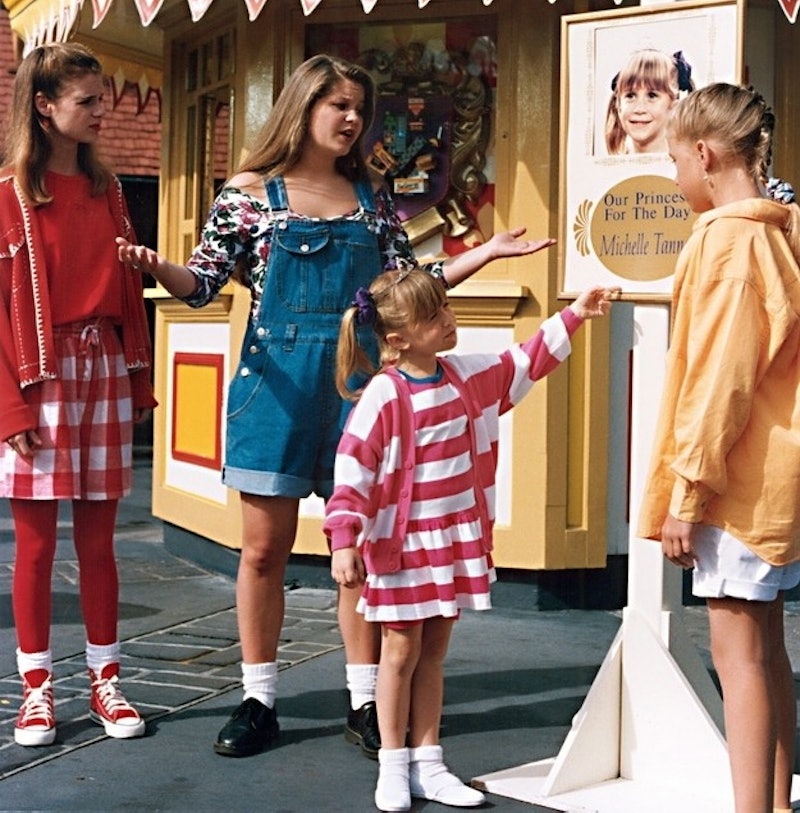 Everyone has their favorite episode of a TV show, and, for me, without a doubt the best Full House episode is the Disney World one. Yes, technically, that trip spans two episodes, but my point remains — they're the best episodes of the whole show. "The House Meets The Mouse" Parts 1 and 2 originally aired at the end of Season 6 in 1993, and they embody everything that's great about Full House.

Not only did the episodes take place on location in Disney World, but they flew every single one of the cast members there. Even Kimmy Gibbler got to go, thanks to her parents, who have a standing deal where they'll pay for any vacation she take as long as its without them. (Poor Kimmy, she's such an underrated character.)

The premise of the show's Season 6 finale is that Jesse's band is going to play a concert at the Disney World castle. (Nothing says childhood magic like a band called Jesse and the Rippers.) So, all the other family members tag along for the trip. It was a recipe built for success, and here are 11 reasons why the Disney World episodes are the best of Full House.

It's Vintage Disney at Its Finest

The Magic Kingdom has undergone a lot of changes over the years, but Full House showed its classic '90s vibe — just like it looked when I was a kid.

It Tackled Those Middle Child Feels

For once Stephanie's struggles of not being old enough to be on her own and not being young enough to get all the attention were addressed. When Michelle was crowned Princess of the Day and turned up the brattiness, everyone could sympathize with Stephanie, who just wants things to be about her some of the time.

But It Also Resolved Some Sisterly Drama

Fortunately the episode ends with Michelle making things right by giving up her final of three wishes to let Stephanie be princess for the rest of the day. I know they go right back to fighting in the next season, but it was nice to see them bond here.

But Jesse was only worried about his hair.

Her boyfriend wasn't able to come on the trip, and DJ missed him so much that she started to hallucinate that she was seeing him as every Disney Prince in the park. In the end he did turn up, because he couldn't stop seeing DJ's face in his cauliflower and cheese toast. Obviously, they had a sweet reunion.

I have a special place in my heart for his wonky self-portrait.

Jesse Apologized to Becky Through Song

Yes, he missed their anniversary dinner. But how can you stay mad at that face?

If Disney Princess smiles could kill...

Such a sweet moment. The only bad thing about this episode is that it forever ruined fireworks for me. 20 years later, and I'm still waiting on this kind of technology.

Jesse Sang "A Dream Is a Wish Your Heart Makes"

It doesn't get any better than Full House + Disney World. This episode makes me nostalgic in all the best ways.