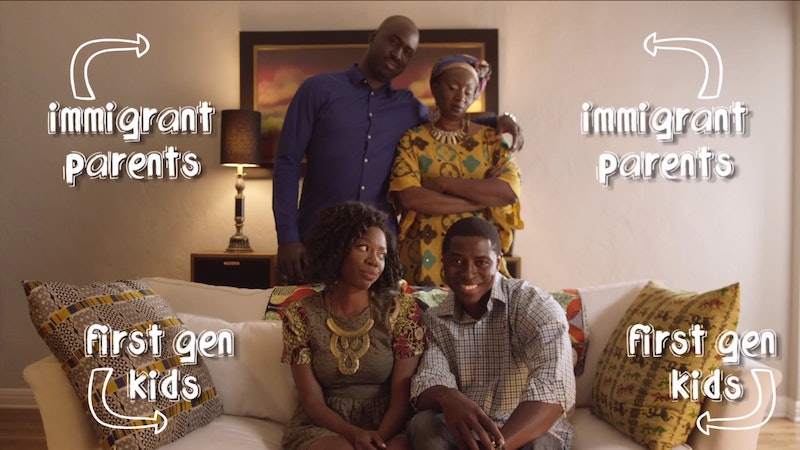 The experiences of first generation kids are very often hilariously – and sometimes painfully – similar. It’s those experiences that comedian Yvonne Orji's web sitcom “First Gen captures. The show follows Joanna, a Nigerian American who, after getting into medical school, discovers that what she really wants is to be a comedian. Orji, who wrote and stars in the show as Joanna, modeled "First Gen" after her own experiences.

It reminds me a little bit of Fresh Off The Boat, another show telling the stories of immigrant families and first generation children. But where Fresh Off The Boat tackles the story from the trials and tribulations of trying to fit in and assimilate as a young child, "First Gen" takes on the story of what happens once you've grown up and are trying to figure out your adult life. Concerns are no longer just about surviving substitute days and bringing the right kind of lunch to school, but about figuring out how to live the grown up life you want while still respecting the sacrifices your parents made for you.

"First Gen" is an hilarious look at what it takes to make that unconventional "American Dream" come true. As a first generation kid from Nigeria, I know all too well the difficulties of pursuing my dream career and life when my parents would have preferred I do something more stable and lucrative with my life. As I meet more first generation children from different cultures, I find that our adult lives, much like our childhoods, are still so similar, as more of us pursue more creative careers. So while "First Gen" is a show about a Nigerian American family, it's really a look at the more universal truths of what it's like to be a first generation kid.

Here are just a few of the truths pointed out in the short trailer.

1. There are pictures of successful people from the same country/culture/continent placed around the house.

When Barack Obama won the election in 2008, my dad bought pictures of the new president and the first family and decorated the house with them. When you come to a new country, especially America, where you're chasing a dream of success or at least a better life for your family, it helps to see people who look like you achieving that success on a large scale. As one of my friends said "you eat, we all eat."

This isn’t just the Nigerian or African version of "The American Dream," but a common expectation I hear from children of immigrants from countries all over the world: their parents desire that they pursue a profession that’s prestigious and has a high income. Which is completely understandable. Most parents didn’t leave a struggling country with limited opportunities so that their kids could become starving artists. Or, ya know, a clown.

3. Your parents are unintentionally hilarious.

Immigrant parents can be really good at throwing shade. Sometimes it's just the way they point out how ridiculous some aspects of American culture are. Sometimes it's how they don't care for people trying to explain their culture to them (ex: Afrocentric neighbors). I can appreciate a blunt and honest voice to put things into perspective, even if it's in the form of a confusing proverb. Unless that blunt and honest voice is turned on me.

4. Your parents love to compare and brag.

As Joanna says in the trailer, “immigrant parents leave their country for one reason alone: bragging rights.” They'll compare their houses, cars, and children. If you’re lucky enough to come out on top of comparisons with other people's kids in an area, you bet your parents will bring it up as often as possible to family members, friends, strangers. It’s all love. And pressure. And a sense of competition with people you don't even really know. But mostly love.

5. Getting you married (to the right person) is VERY important to your parents.

Marriage is big deal in most cultures, including American culture. But the thing with first generation kids in the US is that along with the pressure to get married comes the pressure to marry somebody from your own culture. That way, even though you were raised in America, you can still carry on the traditions of your motherland and pass them on to your children. And their children. And their children. You get the point.

Basically being a first generation kid can be a challenging, but interesting journey. Watch the spot-on "First Gen" trailer below.