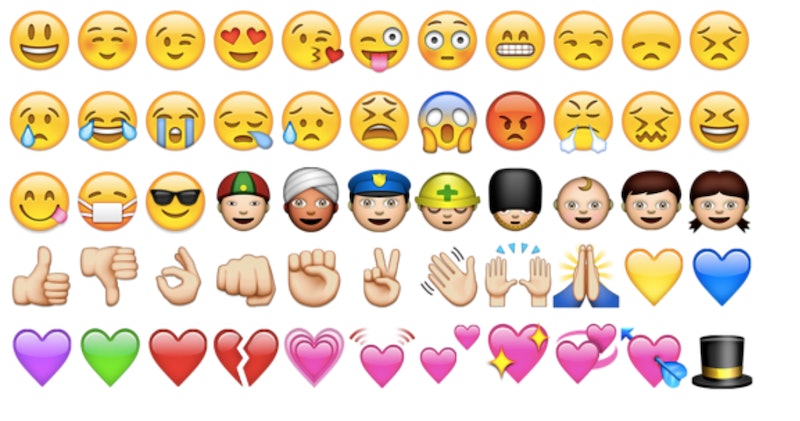 SwiftKey, a keyboard app for iPhone and Android users, just released its Emoji Report. The report, compiled from their optional SwiftKey Cloud service, shows data on which emojis are the most popular in different countries. Yes, this means the Emoji Report is limited to however many SwiftKey users opted into SwiftKey Cloud, but just like a study, a small portion of emoji users can still be indicative of larger trends.

The report, based on data collected from October 2014 to January 2015, analyzed “language and language variants” from 60 emoji categories. So what does this group of users have to say about emojis? Well the first thing it tells us is that even among emoji users, the frequency of individual emoji use is pretty small. Emojis haven’t completely taken over and replaced all text conversation, and even if they did, there are over 800 emojis to choose from, so the percentages in the report represent how often each emoji is used out of all emoji usage.

The Emoji Report is about 18 pages long and pretty interesting. But here are some of the top findings from the report.

Firstly, I think it's hilarious that those categories were deemed "American." Secondly, I have the sneaking suspicion that they are using these emojis to make fun of us. You know, because they’re too polite to say it to our faces. But still, that doesn't explain why Canadians really like the poop emoji.

2. “French use four times as many heart emoji than other languages, and it’s the only language for which a ‘smiley’ is not #1."

You mean the people who speak one of the world's top love languages? The language Beyoncé used in “Partition,” for the part that I still don’t understand, but that sounds really sexy? Yeah, this does not surprise me.

3. “Australia’s emoji use characterizes it as the land of vice & indulgence."

Aussies are using "double the average amount of alcohol themed emoji, 65 percent more drug emoji than average, and leading for both junk food and holiday emoji.” I’ve never been to Australia and know very little about it, but this somehow sounds very accurate to me.

My translation of this: we’re obsessed with unhealthy food (chicken, cake, and pizza), the fixings of wealth (money, crown, cell phone, and city scape) and sports, we’re thirsty (the eggplant emoji), and either threatening each other or sharing trending content, ‘cause the fire and skull emojis can go both ways. Basically, we’re all over the place. Sounds like ‘Murica.

5. "Canadians are twice as raunchy as all other languages, according to emoji."

Canadians use twice as many "raunchy humor emoji." Canadians, what are y'all doing up there? You know what? Don't tell me.