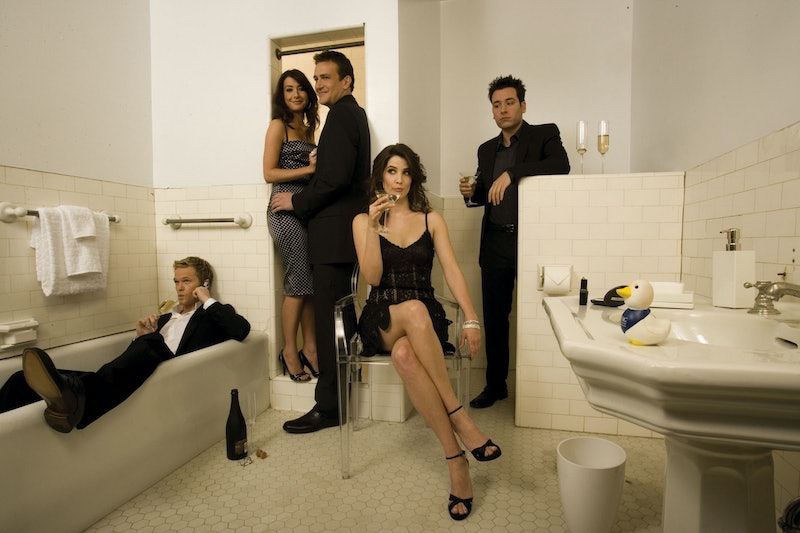 An entire episode devoted to each member of the gang invoking the heretofore unmentioned “no questions asked” rule to try and prevent Lily from hearing the dangerous voicemail Daphne (Sherri Shepherd) left for her at the end of the previous episode? HOW GODDAMN FUN.

This is How I Met Your Mother Season 9, everyone, in which an otherwise innocuous joke is stretched to fill 21 minutes and your cries for help will not be heard. Will we ever see The Mother again? Promos for next week’s episode practically screamed YES, ABSOLUTELY, YOU NEED TO KEEP WATCHING TO SEE HOW IT ALL ENDS, but it seems clear we’ll be getting minimal Mother time over the course of the season. Or maybe we won’t, and our long, boring streak of “loyalty” is about to be rewarded? Who knows. Bustle is probably not the place to throw this sort of claim around, but HIMYM can really only be described as an abusive relationship.

Last night took one “gag” (already a stretch) and managed to fit an entire lame plot — with every cast member’s participation — around its lame skeleton. As you’ll recall, LAST week’s episode ended on what HIMYM would call a “cliffhanger”: Daphne had just left a voicemail for Lily revealing that Marshall accepted the judgeship without consulting her. And considering by the end of this episode Marshall is still nowhere near Farhampton — and thus incapable of feeling Lily’s wrath — we’ve got at least one more episode to see how it ALL ENDS. Do you remember learning about infinite geometric series in school? The way that, with each division, you get closer and closer to nothing without ever actually reaching zero? That’s HIMYM with this Farhampton nonsense, each episode somehow more claustrophobic than the last.

I keep getting off topic. Desperate to stop the voicemail from reaching Lily, Barney enlisted the help of Barney, Robin, and Ted (in that order) to destroy the message. A bunch of wacky stuff happened. Rhys Darby, of Flight of the Conchords fame, pulled guest-casting duty as a concierge we hadn’t seen before who believes in ghosts or something. It’s really not worth spending much time thinking about! In the end, after Ted invoked one more "no questions asked" to have Lily destroy her phone, Marshall finally came clean. Thus inciting Lily's rage, and leading us to the plot of NEXT week's episode.

I'm not saying great storytelling can't be constructed of simple plot turns and emotional reactions. (Men of a Certain Age, which went before its time, made art of moments like someone trying to fix a gutter.) But HIMYM is endlessly, painstakingly polishing turds with these latest episodes. And that's no way to reward viewers who have been tuning in now for nine years — many just to see your show's title paid off! — and deserve more. You can be better!

A Note to anyone reading this who may have had something to do with the production of last night's episode: I wouldn't be this emotive if I didn't really care.