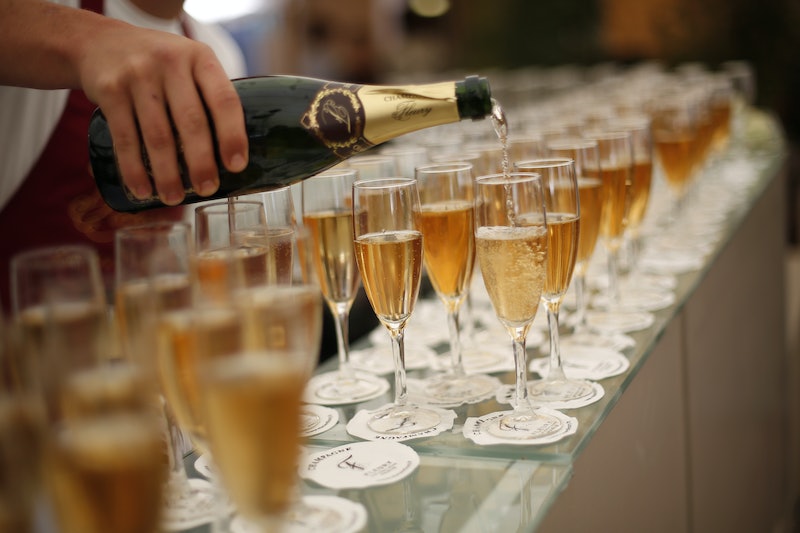 The annual White House Correspondents Dinner is legendary for its glimmering lights, fancy cocktails, and celebrity chit-chat. Each spring, hundreds (if not thousands) of high-profile guests make their way around the country, toasting in ritzy ballrooms and lounges to their own renowned repute and generosity. This year's dinner boasts an impressive roster of Hollywood and political bigshots looking to win some positive cover-time, including Game of Thrones actor Nikolaj Coster-Waldau, swimsuit model Chrissy Teigen, and Ohio Gov. John Kasich. But with all the glamour and pomp of the evening, the extravagant White House Correspondents Dinner might not be appropriate anymore, considering that the Association chooses to spend its donations on an evening of luxury rather than on the journalists and honorees themselves.

"There's a bunch of things they [the White House Correspondents' Association] do for us behind the scenes," said Glynn Hill, a 2014 honoree and Howard University senior, in an interview with The Huffington Post on Saturday. "But at the dinner, people are really just about drinking and taking pictures — outside of the presentations."

Nerd Prom, a new documentary that premiered on April 9, reveals all of those details that the majority of the attendees aren't willing to admit — like the luxurious pre-dinner parties hosted by major media outlets and glossy red-carpet preening by the event's most fashionable attendees.

Brina Monterroza, a 2013 scholar and award recipient, lamented that she felt the event had lost touch with its roots. "It used to be this big event where all these journalists come in," said Monterroza, in a comment to The Huffington Post. "Now it’s just journalists and celebrities partying [it] up."

It's probably not the best time to be "partying it up" either. With national jobs numbers continually leaving those who have given up searching for new work in the dust, the overall gloom factor in the United States might actually be more grim than it seems. Take into consideration a February 2015 Gallup report which asserted that the overall numbers should take into consideration the underemployed and permanently unemployed as well. Explained Gallup Chairman and CEO Jim Clifton:

Say you're an out-of-work engineer or healthcare worker or construction worker or retail manager: If you perform a minimum of one hour of work in a week and are paid at least $20 -- maybe someone pays you to mow their lawn -- you're not officially counted as unemployed in the much-reported 5.6 percent. Few Americans know this.

With the reconsidered unemployment numbers impossible to calculate, it's hard to determine just how serious the problem really is, especially in terms of how it's affecting students — at least one group that the White House Correspondents Association, a registered 501(c)(3), claims it wants to help.

According to a May 2014 report out of Reuters, the yearly Association dinner doesn't seem to "produce much in the way of scholarships for needy journalism students." Just under $70,000 in collegiate and graduate scholarship funding was handed out in 2013-2014, but according to Reuters, the 2013 dinner sold nearly 2,700 seats. At $250 a plate (and assuming a similar number of guests in 2014), that comes out to an overall number of $675,000 in ticket sales alone. With approximate expenses rounding out at $155,000 (including "rent, salary for a staffer, etc."), that still leaves $420,000 in profits for the evening, even after rounding up scholarship and award funding to a full $100,000. The Association then, by way of simple arithmetic, seems to opt for opulence over sincere generosity.

"[What this means is that] the organization spent more on its own management than on its charitable works," explained Reuters reporter Steven Brill, who pointed to the dinner's "glitz and cost" as an isolated topic that no one involved seemed to want to address head-on. "The more the dinner grows, the better it gets."

TV One's Roland Martin told Nerd Prom filmmakers that the illusion of grandeur was actually detrimental to the students and journalists hoping for a leg up in the reporting world — a career field that doesn't exactly promise much in the way of financial stability in the first place.

With all of the fuss and flashbulbs, the White House Correspondents Dinner seems to have more than missed the mark in recent years, taking what could potentially be a real charitable effort and turning it into a parade of champagne and celebrities, many of whom can't actually tell you the name of a single White House correspondent.

I think George Clooney is a great guy. I'd like to meet Charlize Theron. But I don't think a big press event in Washington should be that kind of a glittering event where the whole talk is about Cristal champagne, taking over the Italian embassy, who had the best party, who got to meet the most people.