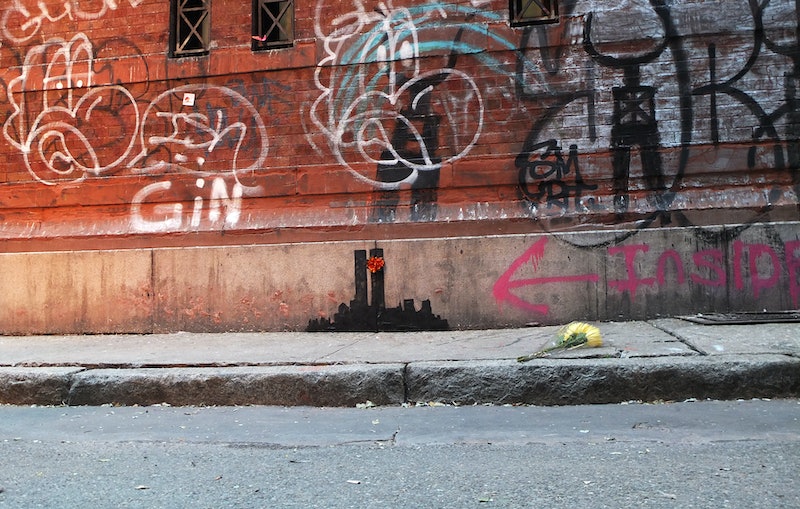 Reclusive graffiti artist Banksy insulted the new One World Trade Center tower Monday, calling it a “disaster.” In a statement posted to his website, Banksy wrote that, “It would be easy to view One World Trade Centre as a betrayal of everyone who lost their lives on September 11th, because it so clearly proclaims the terrorists won.” According to the controversial artist, the Freedom Tower is a “one thousand foot sign” that says, “New York - we lost our nerve.”

Banksy also wrote that he submitted the op-ed to the New York Times, but the Grey Lady declined to run the piece. Not surprisingly, his tirade also got negative reviews from New Yorkers who lost loved ones in the terrorist attacks. Retired FDNY Deputy Chief Jim Riches — who lost his son on 9/11 — said that Banksy’s latest stunt is “insulting to everybody in New York, especially people that died that day.”

The new Freedom Tower stands at 1,776 feet — making it the country’s tallest building — and contains over three million square feet of office space. It is described by the World Trade Center’s website as “Safe, sustainable, artistically dynamic - One WTC stands as a shining beacon for New York’s Downtown.”

Not so in Banksy’s perspective. And he's less than pleased that the NYT didn't run his piece, judging by this new piece in Greenpoint.

Look: it’s obviously not illegal or even immoral to criticize designs for a building that will adorn New York’s skyline for decades. But doing so when the building is nearly complete? Come on, Banksy — you should have thrown your own design into the running while they were still screening entries. At a certain point, statements like that become more of a pointless provocation than a legitimate critique. (Then again, that’s Banksy’s whole M.O.)

Of course, Banksy was already a persona non grata for New York’s law enforcement. Mayor Michael Bloomberg, often accused of making the city into a nanny state, has recently focused in on his housekeeping duties. And graffiti — including internationally-acclaimed Banksys — don’t fit his definition of art, so he won’t be shy about cleaning them up. ”Graffiti does ruin people’s property and it’s a sign of decay and loss of control,” Bloomberg said. Banksy had already painted the old World Trade Center earlier this month, complete with a fresh flower that looked conspicuously like the flames bursting out of the buildings during the attack. His latest outburst probably won’t help his standing with the lame duck mayor.

Meanwhile, the Century 21 department store was set to showcase Banksy’s work in its flagship store until Nov. 6. That was abruptly cancelled after his comments about One World Trade Center became public.

A spokeswoman for the store sent out a to-the-point email Monday: “Due to the recent controversial comments from Banksy on WTC, C21 has just decided to cancel the exhibit,” she wrote. “Sorry for the last-minute notice.”

It looks like at the end of his residency, Banksy’s only New York friend will be “al Qaeda dog” Freddi.