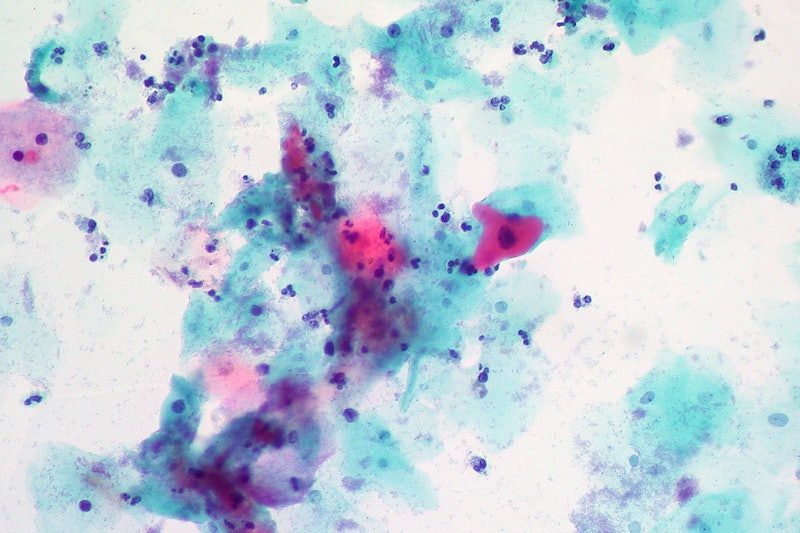 We at Bustle love giving you tips for how to tap into your sexual potential and troubleshoot when things aren’t going your way in the bedroom. But what about finding solutions to those stressful sexual health situations that inevitably crop up when you’re getting down? Emma Kaywin, a Brooklyn-based sexual health writer and activist, is here to calm your nerves and answer your questions. This week’s topic: what it means to get an abnormal pap smear result.

Q: I went to my gynecologist for my regular pap smear the other day, and I just got a call from the nurse saying I should come in for a follow-up because my pap came back abnormal . What does that mean?! What's wrong with me? I'm freaking out that I'm really sick or something.

A: The word "abnormal" is definitely an intense one, particularly when it comes from a doctor; but know it is definitely not a death sentence, and is actually pretty common.

Getting an abnormal pap is extremely common — studies have found that anywhere from two to six percent of people with cervixes get them at least once in their lives. Extrapolating that for the United States population (which boasts approximately 161 million cervixes!), that’s between approximately 3.7 and 9.6 million people who got the same result as you in this country alone. Now contrast those huge numbers with these: around 12,900 people are diagnosed with cervical cancer annually, and only 4,100 die from it annually. This number used to be way larger and was in fact one of the most common cancers Americans with cervixes died from, but because of Pap smears, that number has gone down by over 50 percent!

So let's take a collective deep breath and learn exactly what it means to get news of an abnormal pap smear.

What Exactly Is A Pap Smear Checking For?

First, let's clarify what a Pap smear or Pap test is: it's there to check out whether you have cancer in your cervix, and it is totally routine. Pap smears are usually paired with regular annual gynecological check-up activities. This means that when you get one, your doctor will insert a speculum all up into your parts (hopefully warning you first and doing it gently). If you’re getting a Pap smear during your exam, at this point, the doctor will snag some cells off your cervix with a spatula or soft brush. Luckily, this generally doesn’t hurt, although some people find it uncomfortable.

If, while checking out these cells from your most intimate interior, the doctor finds something that looks not right, you’ll get a call that your Pap has come back “abnormal”.

So ... What Does An Abnormal Pap Smear Mean?

What gynecologists are looking for with the Pap test is indication of precancerous cells. This would be cells that are "abnormal," in the sense that they are not dying at the end of their usual life span or are dividing unusually.

This may sound scary to you. Let’s be real, anything associated with the word “cancer,” even if it has “pre-” in front of it, is going to sound at least a little terrifying, and no one likes their tenderest of bits to be called abnormal. But here's the thing: early detection saves lives. The earlier you can catch these cells, the earlier you can get rid of them or even just have your doctor keep a loose eye on them.

Cervical cancer is a slow roll of a disease that takes years to grow into a beast that can harm you. For this reason, it’s recommended that you get tested every two to three years starting when you turn 21.

What Causes An Abnormal Pap Result?

There are a few things that can cause the cells in your cervix to go all wonky.

Most abnormal Pap results are caused by the sexually transmitted infection (STI) HPV. HPV is the most common STI in the United States. Around 79 million Americans have it, and around 14 million more get infected each year. In fact, it’s so common that almost every sexually active human will get at least one strain of HPV at some point.

The good news is that, of the over 100 different strains, only a couple are known to cause cancer, and there are varying risks within those strains. More good news is that, in a majority of cases, your body will clear an HPV infection, which means it will get rid of it. In fact, the average life of an HPV infection is between four and 20 months, and most people clear it within two years. HPV progresses to pre-cancer in the pretty rare instance when your body doesn't clear a high-risk strain for a long time, leading the normal infected cells to turn abnormal. It generally takes 10 to 15 years for your cells to become abnormal and then transition into cancer cells because of HPV.

The bad news is that it's hard to protect yourself from HPV — if you're having sex, that is. Since it's transmitted through skin contact (as opposed to semen or vaginal fluids, like the majority of STIs), condoms don't protect you completely. However, research shows that they do help, with one study finding that young women whose partners used condoms were 73 percent less likely to get infected. Of course, this is why getting the HPV vaccine is so important.

Other STIs can cause your cervical cells to become inflamed, making them look abnormal. Chlamydia or gonorrhea are both very common in these cases.

Chlamydia is the most commonly reported STI, with nearly one and a half million cases reported annually. Young women are particularly affected, with around seven percent of sexually active young women infected. Gonorrhea is the second most commonly reported STI, with over 300,000 cases reported annually. Luckily, these STIs are treatable with antibiotics, so if this is the reason why you have an abnormal Pap, hit those pills! And you can protect yourself from them in the future by using condoms.

Yeast infections and bacterial vaginosis are other causes of cervical inflammation that can be read as an abnormal pap. These challenges take place when your vagina is too basic (it’s a delicate balance all up in there!). This causes your natural defenses to be weakened, and allows bacteria to grow in amounts that it shouldn’t. Symptoms of these include itching and irregular discharge (the ever-disgusting “cottage cheese-like” description).

You can treat yourself for a yeast infection using over-the-counter creams or home remedies like yogurt and garlic, apple cider vinegar, or boric acid suppositories. You can also ask your doctor for a one-day antibiotic to kick it fast. Bacterial vaginosis can go away on its own, but if it doesn’t, talk to your doctor to get it taken care of.

What Happens After You Get An Abnormal Pap Result?

Depending on how abnormal the cells are, your doctor may need to check you out more. This usually takes the form of a colposcopy, which is when your doctor looks at your cervix using a magnifying glass made for vaginas. If s/he discovers something all up in there, s/he can take a biopsy, a teeny sample of cervical tissue, which can be tested by a lab for precancer.

How To Get Rid Of Precancerous Cells

If you do have precancerous cells, your doctor will vanquish them! This can happen through laser therapy, also called laser ablation, which is when the abnormal cells are burned away with a laser, (because we're in the future). Luckily, you get a local anaesthetic during this, so it doesn’t hurt … although you may smell burning. Another way to get rid of unwanted cervical cells is through cryotherapy, which is freezing off the cells with a cold probe. While you won’t feel the freezing taking place, you may get cramps during and for a bit after. With both of these procedures, once the abnormal cells are gone, normal cells can grow back in their place.

More intense procedures involve removing the whole area — not just the specific cells. Options include diathermy , which uses an electric current to snip the cervical tissue that has the abnormal cells; large loop excision of the transformation zone (or LLETZ for shorter), which is basically the same as diathermy in that it cuts away the abnormal area using a loop of wire and an electric current; cone biopsy , which is when a cone-shaped area of your cervix is surgically removed; and in rare cases (basically once you’re in menopause or certain that you’re done making babies) hysterectomy , which is where your entire womb is taken out.

These are clearly way more invasive, but the advantage is that the removed piece can be checked out by the lab, versus in laser therapy or cryotherapy where they are destroyed.

Getting an abnormal Pap is most definitely not the end of the world, and it is more common than the name implies. If you get one, it means that you might want to get tested for STIs and you will definitely be asked to come back sooner than your usual two to three years to get another smear. These extra trips to the doctor may seem like hassles, but in actuality, you're protecting your future self.

More like this
The 5 Best Pillows For Acid Reflux, According To A Sleep Expert
By Maria Cassano
Here’s Your Daily Horoscope for December 5, 2022
By Mecca Woods
An Open Letter To The Person Who Bought Steve Jobs’ Birkenstocks For $218,000
By Ginny Hogan
20 Christmas Movie Quotes That'll Get You In The Holiday Spirit
By Alexis Morillo
Get Even More From Bustle — Sign Up For The Newsletter