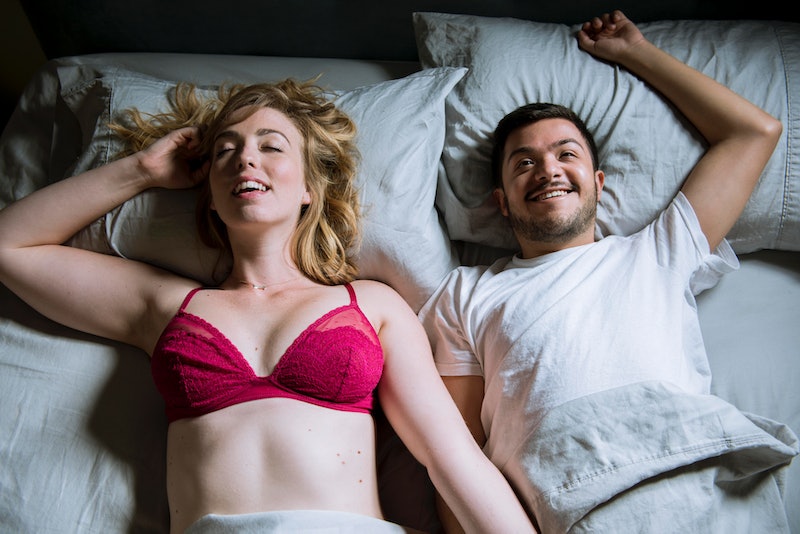 When I say “sex hacks” I’m not talking about easy ways to get your partner off in three minutes, because you’ve got to watch the newest Netflix rom-com and are too lazy to put in work. I’m not talking about pressing any buttons or claiming there’s a one-size-fits-all method when it comes to orgasming. If that’s what you’re looking for, go read a men’s magazine. But you should know, they’re probably all lies. When I say “sex hacks” what I mean is, let's talk about how to have better sex.

There are fun secrets that you learn over the span of your life as a sexually active being, and if you're a good person, you share them with your community. In times of need, you might resort to your kitchen for what ends up being the best lube of all time, or maybe you realize what you needed all along was just a pair of socks. Sex hacks are just an easy way of saying, “Here are some things that might improve your sex life.”

The best part about sex hacks is that everyone has them. I asked my best friend what kind of sex hacks she uses in the bedroom and received way too much information about cock rings (see below). So get comfy, microwave some coconut oil, do some Kegels, and orgasm away.

Can you guess what the largest sexual organ is? Hint: It’s not the guy’s junk who is driving a yellow hummer with a pair of testicles hanging off the back. It’s your brain! I’m not just saying that because I think all of your minds, values, and autonomous opinions as strong and independent women are important. I’m saying that because it’s true. Desire, fantasies, and the recognition of sexual stimuli all come from your brain, and you can use them to trigger an orgasm. Try paying attention to visuals, scents, and scenarios that get you off and make them present during sex. Who knew the Cinnabon scented candle at Bath and Body Works would have so many uses?

Coconut oil as a multi-purpose, unicorn-like ingredient isn’t a new or revolutionary discovery. But what is new is the realization that the best smelling stuff on Earth can also be used during sex as an organic, yummy alternative to drugstore lube brands. (Reviewers especially love the one below from Nature's Way). Not only does it feel, taste, but it smells good, too. Important tip: Don’t use use coconut oil (or any oil for that matter) with latex condoms. It’ll weaken the latex and result in tears. Also, you may want to avoid using coconut oil as lube if you or your partner are prone to yeast infections.

Microwave it for a few seconds so it’s warm to the touch and use it as a massage oil before sex. Not only will it feel fantastic, but it’ll leave your skin moisturized and delicious.

4. Find You And Your Partner's Erogenous Zones

You already know what they are, I just gave them a name. Erogenous zones are essentially your sexual pressure points — places on the body with a high concentration of nerve endings that will trigger arousal when stimulated. OK, OK, I’ll cut the science talk. They’ll make you super horny. Erogenous zones can be anywhere, but some common places are the neck, the ears, the lower back, and the inner thigh. So, why is it a sex hack? It’s useful to know that when you kiss someone’s body, you’re not just doing it to tease them. You’re actually enhancing their sexual experience. And if you really want to kill the mood, look deep into their eyes and say, “Stimulate my erogenous zones, baby.”

5. Put Pillows Under Your Chest

Who says comfy sex can’t be great sex? If you’re on all fours having sex from behind, stack up some pillows — or use a sex pillow, like the Liberator wedge below — to give your chest a place to rest. It’ll take the weight off of your arms and make you feel like you’re having an orgasm on a pile of clouds.

Ah, the Kegel. You probably already know about it, but in case you don’t, I’ll clue you in. The Kegel is an exercise used to strengthen the pelvic floor (to identify which muscles to work out, stop your pee midstream. Now do that throughout the day when you’re not peeing!) and they’re important and necessary for numerous reasons even if they seem like a joke. Not only will they strengthen your bladder, but they can also contribute to a stronger, more powerful orgasm!

Pro tip: Check out the Minna Life kGoal for a more fun way to do kegel exercises.

According one study, a common complaint among people having sex was being cold! So, they gave them socks to wear. Obviously. And guess what? Their orgasms increased by 30 percent. Once people were cozy, they were able to focus on their own sexual climax much better. Who knew it could all be so simple?

8. Be Nice To Each Other

People who feel confident have better, healthier sex. It’s just a fact of life. So compliment each other, point out what you love about your partner’s body, braid their hair, whatever.

Because if you know where everything is, you’ll know how to get around. Nothing is worse than someone who doesn’t know the difference between a clitoris and an elbow.

This article was originally published on April 22, 2015