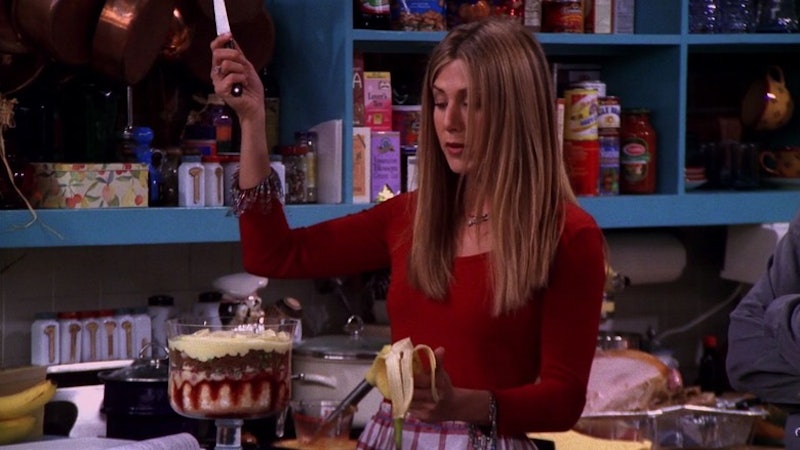 Though it sprawled across 10 seasons and an entire decade and birthed unto the world the Rachel haircut that we'll, thankfully, never truly be rid of, Friends, can, essentially, be boiled down to its 10 Thanksgiving episodes from its 10 seasons. Each Friends Thanksgiving special, usually a bottle episode, is a unique microcosm of the dynamics of the gang: Monica, Ross, Rachel, Chandler, Joey and Phoebe and the important peripheral characters, i.e. families and Brad Pitts.

Much can be gleaned from the episodes about the true nature of the group's friendship: the way they treat each other in times of high stress and with anxiety about family gatherings and, for some reason, the irresistible urge to put turkeys their heads, says a lot about the strength of their bond. Like any good art, each of these episodes (starting with "The One Where Underdog Gets Away" and ending with "The Late Thanksgiving") is not only a part standing in for the whole on behalf of the sitcom, but also a mirror of the viewer.

What exactly does it mean if you loved watching Monica cut off Chandler's toe so many years ago. It means you have your head on right. Basically, what your favorite Friends Thanksgiving episode says about you is a lot.

"The One Where Underdog Gets Away"

What goes down: Everyone's plans get ruined, so they all deign to spend the evening at Monica's. The gang gets locked out of the apartment after they go to the roof to watch the Underdog balloon from the float, and all the food inside burns to a crisp.

If it's your favorite: You probably strongly identify with Chandler in thinking that family-centric holidays are the capital-w Worst. Might also be your fave if you hate Thanksgiving food, but, even as a holiday-hater, there's no way I could hate mashed potatoes and a cornucopia of sauces. Misery loves company!

What goes down: This one wasn't even really about Thanksgiving. Ross makes a pros and cons list about Rachel and is foiled by technology when he prints it from his newfangled computer and she finds it. The only Thanksgiving tie-in is Monica trying to make something called Mockolate.

"The One With The Football"

What goes down: I hate using such an arcane phrase, but this episode really is the battle of the sexes. In short, Monica and Ross relive their memories of the Geller Cup, rematching for one final victory. Also, Chandler meets a Dutch girl.

If it's your favorite: You love watching men make fools of themselves, shot down from their throne of overconfidence by being Beaten By A Girl. Also, you probably have a very strange sibling relationship that makes you love watching Ross and Monica, so that you can at least feel superior to them.

"The One With Chandler In A Box"

What goes down: Chandler is in a box because Joey is mad at him. This is all you need to know. Oh, and there's the subplot where Monica sort of brings... Richard's son the eye doctor to dinner? But Chandler's in the box.

If it's your favorite: All you really care for on this wacky show of friends is Chandler, and whatever is happening to Chandler.

"The One With All The Thanksgivings"

What goes down: LITERALLY EVERYTHING. This is the flashback episode to begin and end them all. We find out that Monica became a chef because Chandler called her fat, and then she later cut his toe off (revenge is a dish best served cold... toed) and that Joey got a turkey stuck on his head in a past Thanksgiving. And then Mon puts a turkey on HER head right before Chandler tells her he loves her! Ahhh!

If it's your favorite: You are an appreciator of the fine art of the flashback, and, truly, the toe moment is exquisite. Also this one is an episode to appeal to the humanity in all of us; Chandler forgives and somehow loves Monica more because she chopped his toe off. That's girl power. Everyone is happy in the end, but some have fewer toes.

"The One Where Ross Got High"

What goes down: The Gellers come over to Monica's for Thanksgiving, but they don't know that she is living with or dating Chandler. Poor Chandler. But, more importantly, Rachel makes a vile beef raspberry trifle and, for some reason, they think the best option is to be polite to her about it instead of knocking it to the ground.

If it's your favorite: You are very bad at giving your friends constructive criticism when they are wrong and about to feed you sludge! Or, if you are the horrible cook, you just feel for Rachel here. More real reasons, though: it's a good episode if you have ever had a bad experience regarding parents and significant others — which is to say, everyone. Also, it can be your favorite just for the yelling-reveal scene at the end, because that's a pretty great scene.

What goes down: Chandler doesn't like dogs, which is, to me, his most deplorable character flaw, so naturally Phoebe reveals she's been harboring a dog-fugee in the apartment. Surprise! It seems like Bing only likes ugly ceramic canines. Also, hot Tag is there.

If it's your favorite: You don't like dogs. Duh.

"The One With The Rumor"

What goes down: Brad Pitt shows up looking young and fresh and fine, and it's funny because he hates Rachel Green but IRL they were married and very in love. I love when Ross gets flustered, and there's a lot of that in this episode, mostly because Rachel finds out he was one of the two members of the "I Hate Rachel Green Fan Club."

If it's your favorite: Could be your no. 1 for many reasons: hot Brad Pitt cameo, you get to watch Joey's subplot which culminates in him eating an entire turkey alone, and maybe you, too, hate Rachel Green. Either way, you live for the drama and crazy coincidences that make life fun.

"The One With Rachel's Other Sister"

What goes down: Rachel's other sister (Christina Applegate playing Amy Green) bursts into the Thanksgiving melee at Monica's, and it's there our drama begins. This episode is HIGH DRAMA, involving much delicate handling of fine china that ends up getting destroyed anyway and a very long, heavy conversation about who will get Ross and Rachel's baby when they inevitably die.

If it you're favorite: You're a jerk like me, watching Friends and thinking about impermanence and death all at once. Life is fleeting. Make sure you know who is getting your baby before it's too late.

"The One With The Late Thanksgiving"

What goes down: Monica and Chandler reluctantly agree to cook Thanksgiving dinner at the insistence of their friends, who screw it all up anyway. Ross and Joey go to a Rangers game, and Phoebe and Rachel take Emma to a beauty pageant, and then obviously they're all an hour late. Poor Monica — UNTIL she finds out at the end of the episode that someone is ready for her to adopt their child, and she's like, yeah, who needs you, you horrible friends!

If it's your favorite: You like to revel in the passage of time and reflect on how temporary and fleeting life is? You love change? You recently entered your own daughter into a beauty pageant and felt the glory of the fame? Or, maybe, you are just vindicated by the episode because mostly everyone is a jerk except for Monica and Chandler. Turns out it's love, not turkey, that conquers all.