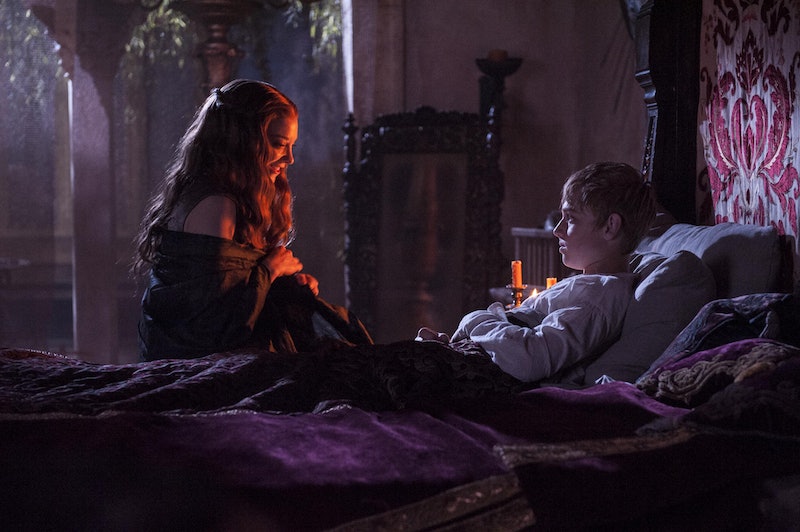 He might be younger, but thank the old gods and the new that Game of Thrones' Margaery Tyrell didn't have to bed Tommen Baratheon's older brother Joffrey while he was alive. In a beautifully prolonged exit, Joffrey was poisoned and died during his wedding ceremony feast, leaving King's Landing's new queen Margaery without a king. Enter Tommen, the teeny toe-headed little brother to take Joffrey's place as the man to help Margaery conceive children. But the age difference between Margaery Tyrell and young Tommen is pretty massive. Doesn't Kings Landing have like, statutory rape laws or something? Apparently not. Because like most marriages in the seven kingdoms, this one is entirely political.

Interestingly enough, these two characters' ages actually affect the Fire and Ice screen adaptation in ways you might not anticipate. The show is filmed in exotic locations around the world, but in Ireland, where a good chunk of the HBO series is shot, the broadcasting decency laws set the age of consent at 16, not for the actor portraying a character, but for the character himself. So this whole plot line would be moot given Margaery's age and how young Tommen is.

Luckily, the main children on Game of Thrones were aged up for the TV series at least a couple of years. This worked out swimmingly for Tommen, who was granted the largest leap in age out of all the kiddos. When the books started, he was a wee 6 years old. But on the show, his starting age was 10. Now, he's around 13 or 14. The actor who plays him, Dean-Charles Chapman is 17.

In the books, Margaery's starting age is 16. Her age on the show, currently, is probably around 21 or 22 — though it's unclear. Apparently, Game of Thrones creators were so impressed with Natalie Dormer’s portrayal they decided to up her age in order to cast the actress, who should be just 18 on the show. This makes their characters' age differences about 8 years — give or take a year or two.

Natalie Dormer is 32-years-old in real life, making her kissing scenes with the 17-year old Chapman all the more unsavory. It certainly freaked Chapman out. He told MTV News that he could barely watch the scenes.

"It was very disturbing," he said. And he found out about the scene just by reading the script, he added — which means that no showrunner or anyone on set sat him down and prepped him for it. Though there were limited people on set that day and they did a bunch of run throughs to make sure everyone felt comfortable.

Luckily, Dormer made filming the scene, despite Margaery's age, even easier. Chapman told MTV in the same interview, "Natalie is a lovely person, she made it all completely smooth. It’s just really weird as a viewer to watch -- even if I watch it, it’s pretty messed up, because Tommen is such a young kid. Margaery is like, this fully grown woman, who is really just using Tommen for the power she can get from him."

Of course, Game of Thrones is no stranger to controversy and for a show that features incest and rape, the age difference between Margaery and Tommen may seem almost quaint to some viewers. It's definitely attention grabbing, to say the least.