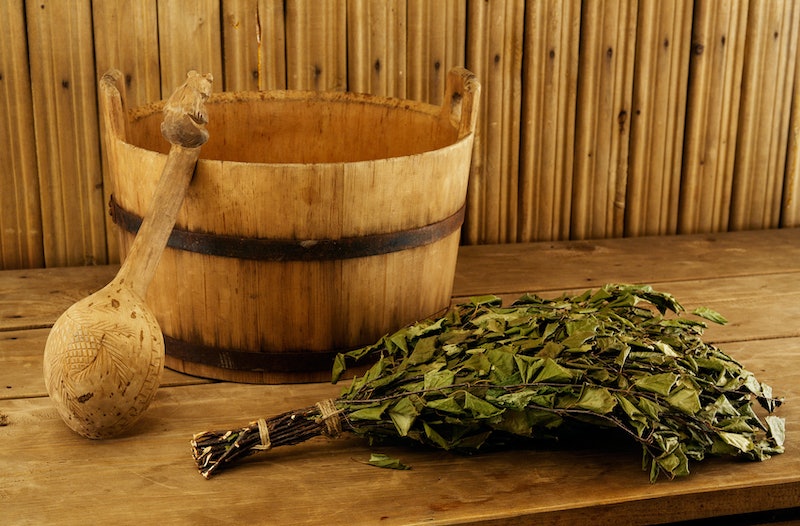 My first summer in New York City was brutally hot, especially since I refused to get an air conditioner for my tiny bedroom in the East Village: My boyfriend came down from Boston to visit me one weekend, and, fed up with my irrationally principled stance against artificially cold air, suggested we try to find a pool in the neighborhood. This wild goose chase is how we stumbled upon the Russian and Turkish Baths, located on East 10th Street in a relatively nondescript townhouse. We saw the sign outside and heard the whirring of the furnaces but quickly ran away because it all seemed too intimidating. Plus, we wanted to be outside, not in a bathhouse; it was summertime, after all.

But the whole idea of a bathhouse stuck me, especially one that's so casually nestled next to a Pilates studio in my neighborhood, and I added it to my running list of things to do in New York City. I knew the time had come when pulsd was having a sale on the admission to the Baths. Not only would I get a get a day of admission to the Baths, I would also get an "oak-leaf platza scrub," which was described on the website as being scrubbed (read: beaten) with "a broom made of fresh oak leaves, sopping with olive oil soap." The oak leaf is apparently a natural astringent, and the treatment promised to open pores, remove toxins, and exfoliate skin.

It sounded slightly terrifying but probably worthwhile. I'm always on the lookout for better, and all-natural, ways to exfoliate my skin, so why not try getting beaten by some branches with some olive oil? (To put this in context, please remember I once put hydrolyzed placenta on my face to get clear, taut skin.)

Immediately after buying the pulsd coupon, I emailed the Baths to make an appointment for my platza. In my reservation request, I asked if I could take pictures of the oak leaves or the treatment or the spa itself. Their response was a hard no, but for good reason: "You won't be able to take photos since the treatment is done in a 200-degree room and may destroy your camera."

This is when I started to get nervous.

I showed up at the Russian and Turkish Baths on a Wednesday evening, as scheduled, unsure of what to expect. I walked through the threshold and was greeted by a lobby full of grown men decked out in black cotton robes and brown towels. I went up to the front desk and was presented with a small metal box, no bigger than a pencil case, in which I was told to put my valuables. When I tried to show my coupon, the woman at reception waved me aside and told me that payment came at the end. She pointed me toward the women's locker room as she continued to joke with the men standing around the counter, who were clearly regulars and knew what was up.

Once I had on my own black bikini and matching black robe, provided by the Baths, I returned to the small lobby. It was 6:00 p.m., the time for which I had scheduled my treatment, but it didn't seem like there was any formal system of checking in. As I started to go back toward the front desk for some guidance, a burly guy in a burgundy cotton robe and a towel wrapped on his head like a turban popped up and asked, "Do you want a platza?" "I actually have an appointment for one at 6:00 p.m.," I admitted, and he shuttled me downstairs into the spa. I don't think anyone had ever told him I was coming.

He introduced himself as Victor and asked for my name. "Max! First time? Wonderful! Now, this is your experience." As he escorted me down into the subterranean space, I felt like I was being eyeballed by the other clients, who were primarily older, half-naked white men with hairy chests. Like the woman at the front desk, Victor knew most of them, jovially slapping one younger guy with a bunch of tattoos on his bare chest. The main room was dark, with a small, shallow bright blue pool shining in the middle. There were different doors that presumably led to different treatment rooms, all of which had windows that were coated with steam. I could sort of see the outlines of people, mainly men with hairy bellies, through some of the fogged glass as Victor guided me through the small and crowded space.

"We have two options. You can do the treatment in here," he opened a heavy wooden door into a room marked "Russian Sauna." I stepped inside and gagged from the heat, which was not a reaction I knew my body could have to extreme heat. I think there were other guys in there, but I couldn't really tell because I was so instantly, uncontrollably, and physically overwhelmed by the temperature. I managed to choke out, "What's the other option?" as I rushed toward the door. Victor took me back into the main room and opened the door to what I thought were lockers, like weak metal changing stalls at the neighborhood pool. In the middle of the small room was a "massage" table covered with towels, and to the left of the "bed" was a shower head with a hose attached. "Here's good," I said.

I was instructed to lie on my stomach. Victor put a towel over my head, and then dumped a bucket of hot water on my back. This was followed by a thorough beating with the oak leaves, from the soles of my feet, up my spine, and onto my shoulders. I was then coated with oil and scrubbed with a loofah. (I think it was a loofah. I couldn't exactly see what he was using at the time because of that towel on my head, but it definitely felt like a loofah.) He massaged my feet and thighs, which was more of a rub-down than really getting deep into the kinks of my muscles. He then took a hose, which was connected to the ceiling, and literally hosed me down. This was followed by another beating with the oak leaves. After the last dousing with a bucket of water, Victor let out a triumphant, "Nice," and told me to turn over.

As instructed, I flopped over onto my back and Victor repeated the process, which was a bit more pleasant now that I knew what was going to happen. The beating was less intense than I thought it was going to be. It was more like I was a floor that Victor was sweeping with his oak-leaf broom. I wasn't sure how effective the actual oak-leaves were at getting rid of dead skin, but I was sure the loofah would get anything the platza might miss. The smell of the oil was also pleasantly herbal, and the massage was a nice touch, although I did get more uncomfortable when Victor started massaging my neck. (His groin was a little too close to my forehead for my taste, if we're being honest.)

The whole treatment was over and done with in 15 minutes. Victor told me to sit up and wrapped my top-knot in a towel and told me I'm a "princess" who should just enjoy the rest of the facilities for the evening.

Feeling slightly refreshed and entirely dazed, I went back into the main room where I felt like I was being stared down all over again. The "rest of the facilities" included that wickedly hot Russian Sauna, a Redwood Sauna, which is closest to any other sauna I've encountered, a Turkish Sauna, an Aromatherapy Sauna, and an ice cold pool, kept at about 40 degrees. Of all these options, the Aromatherapy Sauna seemed the least intense because the windows were the least steamy. I sat in there for about five minutes when a woman came in with a bottle of eucalyptus oil, which she poured into a nearby bucket and then started the steam going on full blast. The air became painfully thick, making it hard to take full breaths, which was only compounded by the eucalyptus, making my throat and eyes burn.

After 30 minutes of sitting in various hot rooms and sweating profusely, I had to leave. I was starting to feel lightheaded and didn't want to pass out, and going alone to the Baths made me feel like a bit of a creep. I paid at the front desk with my coupon, and got out, grabbing a bottle of water from a bodega on the corner as I plodded toward the subway.

I met up with some friends for drinks immediately afterward, looking like a wet dog and feeling like a wet noodle. My limbs were shaky, probably from dehydration, and one of my friends pulled a leftover oak leaf off my neck. Exhausted, I took a shower when I got home, and it felt like the water was just cutting into my skin. After I gently dried off with a towel, I put on body lotion and face cream, which felt wonderful; my skin was clearly thirsty and needed some TLC after that beating. The next morning, I spotted some light abrasions on my thighs and butt. (It's actually kind of uncomfortable to sit down in my desk chair right now.)

So is my skin markedly better? Not really. Did I enjoy going to the Russian and Turkish Baths? No. The entire experience is based on extremes, be it extreme heat or extreme cold or extreme treatments, and that's not really my jam. But do I understand why people love going to the Russian and Turkish Bath? Absolutely. I totally see the meditative aspect of sitting in these extreme temperatures. There's also the community that's built up around this space, and if you're comfortable there, then bless you for having found your people. I, however, felt very out of place. Part of that came from unfamiliarity with the spa itself, but throughout the hour I was there, I couldn't shake the feeling of infiltrating some kind of old boys' club where I didn't totally belong. This isn't to say that the space was exclusive to men; no inappropriate comments were made or explicitly lecherous looks given and at no point was I ever told I wasn't allowed to go into the treatment room I wanted. And maybe I wouldn't have felt this way if I had gone on a women's only night rather than a co-ed night.

The Russian and Turkish Baths are part of a long tradition of Eastern European steam baths and spa treatments and bathhouses that I just don't have the cultural context to understand. This particular bathhouse has been around since 1892, after all. People were there to chill out, but I don't think it's my way to relax. I don't think I'll ever get another oak-leaf platza, but at least I can live my life knowing I'm a princess in Victor's world.

More like this
12 July 4th Beauty Sales To Jump On ASAP
By Jordan Murray
The Best Of June's Beauty Launches, According To Our Editors
By Bustle Editors
Yes, You Can Buy Off-White’s New Beauty Range In The UK
By Tomi Otekunrin
The $6 Drugstore Beauty Product Taraji P. Henson Uses Every Single Day
By Danielle Sinay
Get Even More From Bustle — Sign Up For The Newsletter