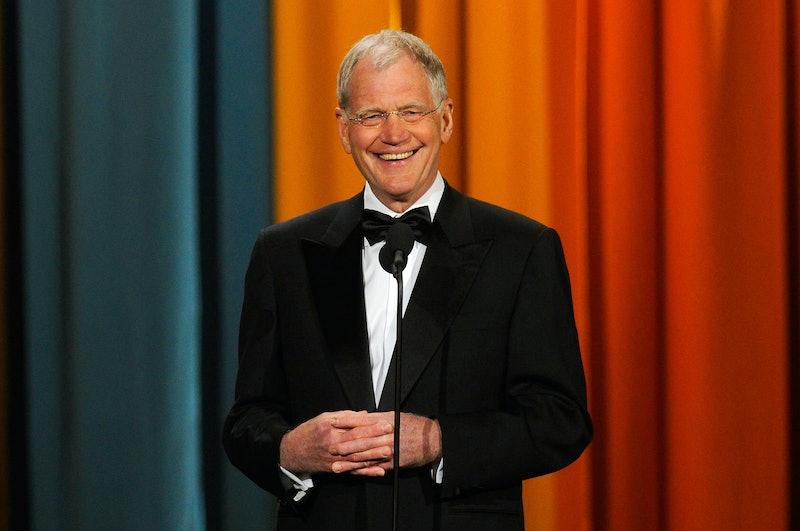 After an incredible 22 year run — that's over 4,000 episodes, just to be clear — David Letterman will step down from The Late Show on May 20, and I'm pretty sad about it. Letterman is the king of late night TV and has interviewed everyone from singers and movie stars to the President of the United States. His presence on our screens will be sorely missed, so much so that CBS just announced plans to give Letterman a primetime sendoff special to be hosted by Ray Romano. David Letterman: A Life on Television is due to air May 4, several weeks before his final Late Show broadcast, but oh man, I'm already way too sad that we're losing such a funny and fascinating man. After all, we're familiar with Letterman the star, but what about the man behind the series? How much do you know about him?

There are, of course, the basics: Letterman was born in 1947 in Indianapolis, Indiana and began his broadcasting career on Ball State University's radio station WBST during his attendance at the school — a position he later lost after disregarding classical music.Pre-fame, he worked as a radio weatherman before moving to Los Angeles to start a career in stand-up. The rest, as they say, is history. Of course, there's still a lot of stuff most people don't know about him — little bits of trivia that are interesting and could come in handy if you ever find yourself in need of random facts.

Here are 7 things you may not have known about David Letterman.

He was credited in several movies as Earl Hofert, which is actually his uncle's name

Letterman played "Old Salt and a Fishing Village" in Cabin Boy back in 2004, and was also the Motley Crue roadie that's also possibly Butt-Head's father in Beavis and Butt-Head Do America back in 1996. Extra fun: Letterman had the animated characters on The Late Show to promote the movie that same year.

Who knows why he does it, but Letterman has been using segments from monologues of years gone by in his newer episodes, and it can be rather hilarious largely because it seems so out of place.

He covered for Johnny Carson a whopping 51 times... before losing The Tonight Show to Jay Leno

Can you imagine doing someone's job — and doing it well — 51 times, only to lose out to some other guy who didn't have half the experience you did? That's exactly what happened to Letterman when Jay Leno was given The Tonight Show over him back in 1992. It's safe to say things worked out, but... seriously?

He almost had a part in Airplane!

Letterman did a screen test for the classic 1980 comedy Airplane!, particularly the role of Ted Stryker. So did Bill Murray and Chevy Chase, though none of them got it — the role went to Robert Hays.

He owns his own production company, record label and charitable organization

That's right! Letterman doesn't just host The Late Show, he also keeps busy running Worldwide Pants, his production company which not only produces the talk show but was also behind Everybody Loves Raymond and a few shows of Bonnie Hunt's. His record label, Clear Entertainment, was established in 2010, and he donates millions through The Letterman Foundation for Courtesy and Grooming to non-profits in Indiana and Montana. Whew. When does he sleep?!

He tosses a pencil at the end of every show, but they've got erasers on both ends

Safety first! Letterman always tosses a pencil during every broadcast, but nobody's trying to lose an eye, so producers got smart: he uses only pencils with erasers on both ends. Let's hope he never needs to write anything down.

He was voted Class Smart Alec in high school

No one's surprised here, right? Those humble beginnings got him where he is today — and we wouldn't have it any other way.