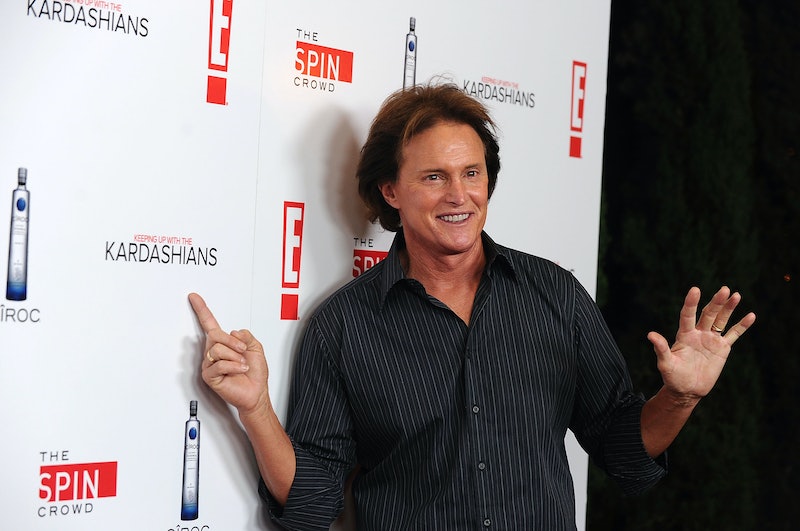 After hundreds of articles have speculated that Bruce Jenner was transitioning from male to female, the reality TV dad and former Olympian finally made the announcement on 20/20 with Diane Sawyer that he is "for all intents and purposes...a woman," and that he is "finally happy." "The interview, the journey, the decisions, the future" proclaimed one of the promotional teasers earlier in the week leading up to Diane Sawyer's interview with Jenner. "My whole life has been getting me ready for this," Jenner said in the clip. And in the two-hour interview, viewers were given a brave, revealing look into exactly what that life has been about — and where it's headed from this point forward. This very public coming out by a very public person marks not only a bold move by Jenner, but a tremendous, landmark opportunity for the entire transgender community.

The 20/20 interview comes after many months of rumors about Jenner's rumored transition. Mainstream entertainment media has speculated that Jenner is trans since December of 2013 when it was reported by TMZ that Jenner may have flattened his Adam's apple through a cosmetic procedure. TMZ, at the time, stated that "he [Jenner] isn't looking to change his gender," but that he never "liked his trachea." The trachea shave announcement came two months after it was reported that Jenner split with then wife Kris after 22 years of marriage.

"Are you ready?" Sawyer asked at the beginning of the interview. "I've been thinking about this day forever," Jenner said emotionally, "...and what I should do with my life and how do I tell my story and that day is today." Still using male pronouns, Jenner, when asked if he is a woman said, "Yes, for all intents and purposes... Yes. It is part of me and it's who I am, but I was not genetically born that way."

"Bruce Jenner is always confused with my gender identity since I was this big." Jenner gestured when asked the question, "Bruce is...?" He went on to explain,

"Bruce is always telling a lie about who he is and I can't do that any longer. I see a confused person, running away from my life, running away from who I was...with big time fear. I was scared to death, and I didn't know what my future held at that time."

In the past, Jenner had started hormone treatment in the 1980s, but lost the courage after 5 years and began to de-transition. Religion, family, celebrity status and a string of divorces based on his gender identity issues were all to blame for his initial retreat, but now Jenner says he was "born this way and made this way."

This will be the last interview he does as Bruce Jenner.

According to a recent Human Rights Campaign poll, 22 percent of Americans now say they work with someone or know someone who is transgender. That number is up from 17 percent a year ago and almost triple what an earlier Pew Poll has stated. What's more encouraging is that the same HRC Poll stated that a full two-thirds of respondents now have a favorable opinion of trans people.

Visibility and acceptability for people who are transgender has been on the rise in recent years. Celebrities like Laverne Cox, Janet Mock, Chaz Bono, Michelle Hendley, Laura Jane Grace from Against Me!, and now Jenner, have put people who are transgender in the spotlight, albeit not always in a positive way. Major "coming out" experiences, like Jenner's, help the general public understand people who are transgender by seeing us as one of them, but with newly heightened visibility comes newly intensified backlash; This new development will also undoubtedly create another round of bathroom bills and anti-transgender legislation.

As more and more people come out as trans, our visibility as a community rises and we as trans folk become less of an exception as we drive closer to acceptance. Bruce said he can't speak for the transgender community, but he just hopes his decision to come forward will help.

When asked about visibility in the media, trans actress Michelle Hendley, currently starring in the pilot for NBC show Endgame told Bustle, "The more visibility we can acquire as a community, the more normalized trans people will become in our society. Right now, the world is just starting to even acknowledge trans lives, but we need to be seen if we want to be heard."

"In mainstream media specifically," She added, "if you look back ten or fifteen years ago shows like the The L Word and Will and Grace helped make being gay a normal thing for the everyday Americans (things aren't perfect yet, mind you). People are having more conversations about gender and identity, and with more trans characters appearing in film and television I can't help but think we are witnessing the beginning of a revolution."

Bathroom bill selfie trans advocate Michael Hughes stated that he has definitely seen a rise in the visibility for the trans community over the last couple of years. "With that increased visibility," he stated to Bustle, "there has come some push back and resentment, but that's to be expected. I'm happy to see so many more trans people from celebrities all the way down to blue collar workers coming forward and sharing themselves with the world. I do believe it is making a difference." Hughes continued,

"The more we open ourselves up and share who we are, and the journey we take to live authentic lives, the more people will be able to relate to us. So much of the negativity comes from fear and misunderstanding - to combat that, we have to show society that we're here and that we aren't these stereotypical images that they have in their heads."

Michael would know about kickback and negativity: His bathroom selfie campaign not only started a debate on the ridiculousness of trans bathroom bills, but in the process, made him a target of criticism from people both inside and outside of the trans community as he was accused of appropriating hashtags, promoting the binary and showing off his ability to pass.

Previous to tonight's airing, Jenner had already been plagued with mainstream media "ick factor" reporting. Although not the official "first swing" by any means, InTouch magazine photoshopped Bruce's lipsticked face on to the body of Dynasty star Stephanie Beacham's to give its reader and idea of what Jenner may look like after her transition. As recently as this week, Kourtney Kardashian's partner Scott Disick called Jenner "The Extensionator" when referring to his hair.

"I never fit in." Jenner said during his interview, "When you deal with this issue, you never fit in." This sense of marginalization and not belonging could possibly accounts for the elusiveness and somewhat meek demeanor Jenner frequently displayed on Keeping Up with the Kardashians. However, when it comes to the Kardashian machine, he believes that his presence can do some good.

"What I'm doing is going to do some good and we're going to change the world. I really firmly believe that we are going to make a difference in the world with what we are doing, and if the whole Kardashian show and reality television can give me a foothold into that world and to go out there and do something good, I'm all for it."

Jenner, however, was firm that this is not a publicity stunt to boost ratings. "Oh no, we would never do that, Diane," Jenner said sarcastically, "Do you have any idea what I've been going through my whole life?" His gender dysphoria has been going on since he was 8 or 9 years old. "Its just not the last few years as they have been treating me as a joke. I'm me. I'm a person and this is who I am."

Our joke status in society, as well as within our own families, is a constant reminder of why the suicide rate within the U.S. transgender community is 41 percent compared with the 4.6 percent we see in the general population. We, as people who are transgender, dare to smash the so-called gender binary paradigm so hard that the cisgender reaction can be violent and unforgiving. The sheer thought that any of us, including Jenner, would "choose" to do this to ourselves, when in fact we are forced to transition to keep ourselves alive, is so disturbing that when intersex is thrown into the mix, the most hardened trans exclusive feminists throws their hands up in the air, become speechless, and begin to stumble and contradict their own previous doctrines about the transgender experience and the mythical traditional binary roles they hold so dear.

Failure is not an option when it comes to Jenner and his transition; but failure is also not an option for anyone who comes out as transgender. Our collective story is heartbreaking and riddled with rejection; However, a large majority of us rise up far beyond any potential we have ever believed we had and are raising our voices louder than they ever have been. Jenner has just handed us a megaphone and it's now up to us to harness the positive energy he just laid at our feet.

Rapper Dominic Giovon Chilko, aka, Lil One, feels that the visibility he has received from coming out as trans in 2014 has helped his career: "I feel I'm able to reach a bigger range of people because I am noticed in the public eye," he said to Bustle. "People listen to what I have to say and feed off it. I've been given a voice and I intend to use it until it goes out. As for the media circus, they are gonna feed off of it because of who it is, but just like all other big news, it soon shall pass and this individual [Jenner] will be able to lead a normal life."

Jenner has, in fact, never led what could be considered a "normal life." Kaiya Kramer, host of The Queer Life Radio Show on KBBF in San Francisco believes the impact of Jenner's coming out will "be one in accordance with how the media has already portrayed him. Playing on the typical Kardashian hype. Bruce Jenner has the option to remain silent about transition, but with the power and influence, I would certainly hope for another advocate to be born."

The transgender community needs people like Jenner to be vocal about their transition while creating a relationship between sincere story telling and the abject money grab of reality TV pay checks. Kaiya Kramer continues, "The reason why we need notable trans people who are visible to the public is to break down stereotypes that all trans men or women are the same. It's to show that we all have very different trajectories and that we're all in different professions."

The public's insatiable appetite for everything trans will only fuel the transgender merchandising machine and guarantee Jenner's 24/7 access to the media circus he has helped perfect and perpetuate. Actress Michelle Hendley is correct: There is a trans revolution happening. The only question remaining: Will the revolution be televised? Because of Jenner's interview with Diane Sawyer, and the educational conversation it kickstarted, it might just.