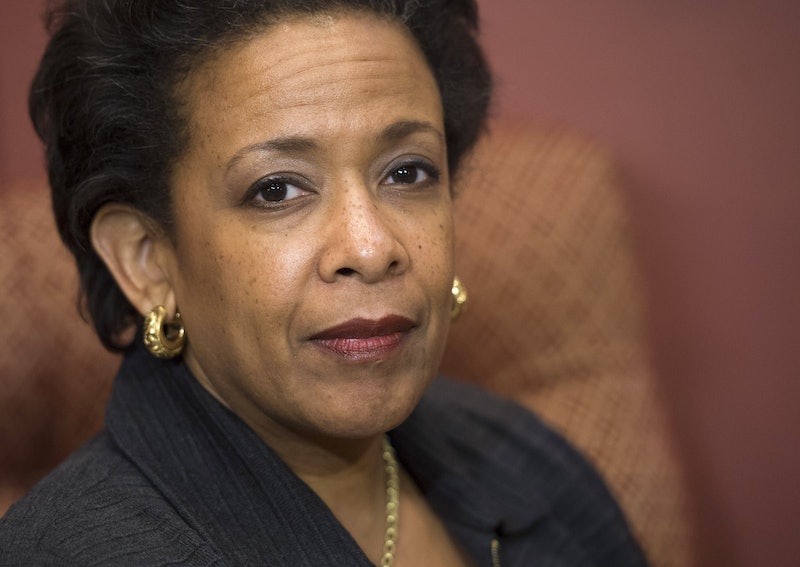 It is finally official: Loretta Lynch is the United States' new attorney general. After a five-month long wait to be confirmed, Lynch won the Senate’s stamp of approval with a vote of 56-43 on Thursday afternoon. Ten Republicans crossed the aisle to give Lynch a vote of approval — including Senate Majority Leader Mitch McConnell. However, her wait for this vote took longer than the confirmation of the past seven attorney generals combined, according to the AFP.

Lynch’s long wait to confirmation isn’t her biggest mark in history though. Thursday’s confirmation of Lynch marks the first time that an African American woman has led the United States Justice Department. But considering her record, this mark in history will likely be far from the last one she makes during her tenure.

Lynch is a two-time U.S. attorney for the Eastern District of New York with an impressive amount of experience dealing with cases of police violence, terrorism, and political corruption. Perhaps even more impressive, she might just be able to bridge the massive partisan gap with Republicans.

Here’s to you, Loretta Lynch, for finally getting confirmed. And here are 11 reasons why she is about to be a great attorney general.

1. She doesn’t seem like she’ll spark much controversy with Republicans

Out of all of Obama’s choices for attorney general, Lynch is decidedly the least controversial of the bunch, The Washington Post reports. While Lynch may have struck a sour note with Republicans’ when she spoke in favor of Obama’s executive action on immigration, on the whole she seems to be a non-polarizing leader.

2. Former colleagues have described her as “a person who thinks, speaks, and acts in full sentences and paragraphs"

According to Lynch’s colleagues, if Republicans are looking for her to make a gaffe, they’ll be waiting a while.

3. She has an impressive amount of experience

Even Republicans have lauded Lynch’s resume. The graduate of Harvard Law School was twice appointed to the position of U.S. attorney for the Eastern District of New York by Bill Clinton.

4. She has already said she will strive to improve the Justice Department’s relationship with Congress

In January, Lynch vowed to work to build a “new and improved relationship” with Congress, and to act independently of party ties. If Lynch hopes to get much of anything done during her time as attorney general, good relations with the Republican-held Congress will be key.

5. The Ferguson debate, which she will likely be immediately thrust into, is not unfamiliar territory for Lynch

One of Lynch’s first tasks as attorney general will likely be addressing the mounting tension about police brutality, which was largely sparked by the death of Michael Brown in Ferguson this summer. Lynch, however, has already led a case dealing with police brutality, according to The New York Times. When she was U.S. Attorney in the Eastern District of New York, she helped lead the prosecution of a case of a police officer sodomizing and beating a Haitian immigrant in 1997.

Another important point that this case made about Lynch is that she believes that if police overstep their bounds, they should be held accountable. “Not only were people in New York City looking at this trial, people around the country were looking at this trial,” Brooklyn District Attorney Ken Thompson, who worked with Lynch on the case told Raw Story. “It showed that police officers can be held accountable if they cross the line.”

7. However, Lynch has good relations with police, and thinks that police can be part of the solution

8. She will be the first African American woman to lead the Justice Department

Lynch’s nomination is a big step of progress toward better representing not just women, but women of color, in positions of leadership. As Sen. Claire McCaskill said of Lynch's nomination, “This woman is the embodiment of the American Dream in action.

9. She will likely continue previous Attorney General Eric Holder’s legacy of ensuring equal rights for all

One of the hallmarks of Lynch’s predecessor’s tenure is his attention to civil rights and his position at the front of the country's mounting debate about minority inequality in the justice system. Lynch, who grew up during the civil rights movement and whose parents are civil rights activists, will likely also champion for equality. However, her priority will be her duties as attorney general, rather than as a civil rights activist, The New York Times reports.

10. Lynch already plans to ramp up efforts in a couple big areas

11. Obama himself said that America will be better off with Lynch in leadership

On the day of Lynch’s confirmation, Obama offered this statement: "Today, the Senate finally confirmed Loretta Lynch to be America's next attorney general — and America will be better off for it."