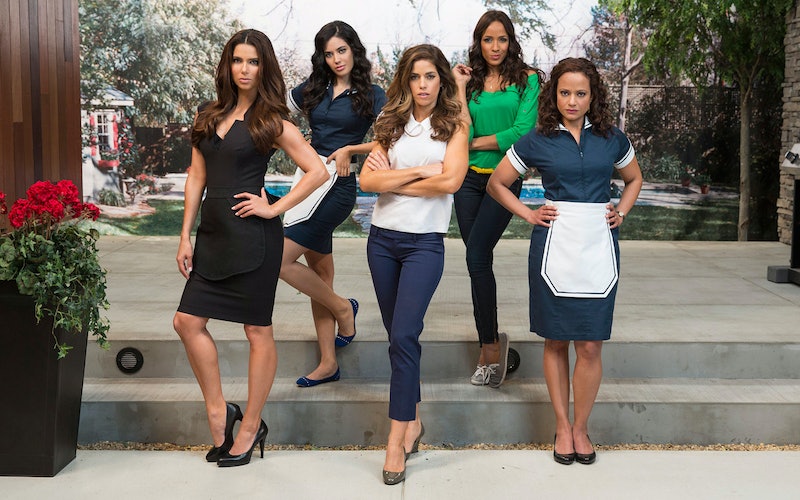 Lifetime's new drama Devious Maids premieres this Sunday, but it's already garnered quite a bit of attention. But, unfortunately, not very good attention. The Eva Longoria-produced show — written by Marc Cherry of Desperate Housewives — has come under fire for its portrayal of Latina women. Critics are calling the show out for casting exclusively Latina women as the maids to wealthy (and white) Beverly Hills families.

But Longoria — a woman with Mexican ancestry famous for playing Gabby, a former model-turned-spoiled housewife on Desperate Housewives — claims that critics have no reason to call the show out for its portrayal of "the help." "It's a fact that we do make up a large percentage of domestic workers, and so when somebody criticizes us saying, 'Why are you telling their stories, it's so stereotypical?' I always say back, 'You're telling me their stories aren't worth telling, that maids are not complex, that they don't have a life, that they don't have a story to tell, and they do.' "

While Longoria's defense of the race of the maids on her show — played by Ana Ortiz of Ugly Betty, Roselyn Sánchez, and others — seems legitimate, particularly because the series is based on a telenovela, it's still easy to be skeptical. The fact that the show is about Latina maids — rather than, say, the same women in essentially any other profession — is already setting itself up for chatter. It is disappointing that Cherry and Longoria's first collaboration since Desperate Housewives — a show in which Longoria portrayed someone very much against the traditional stereotype of a Mexican-American woman — doesn't place its cast in a different setting, or at least a different role. But they're part of a larger problem: The world of wealth and excess is almost exclusively depicted as a white-washed club on screens big and small (just look at TV's Beverly Hills, 90210 and Dallas).

Since art does tend to imitate art (regardless of how much or little it imitates life), it seems that Cherry took an easy route, deciding to portray both the have and have nots as they have commonly been portrayed. Jennifer Lopez in Maid in Manhattan, Zoila on Flipping Out — these projects showcase their maid as the "odd girl out" in a wealthy society due to her race.

And it seems to be a new phenomenon on television. No longer do TV families embrace housekeepers into their families like Alice was embraced in The Brady Bunch. In the recession years, having a housekeeper on television became symbolic of a life of luxury — if you can afford a maid, you've, well, got it made. If we don't see maids as part of the family anymore, we need to give the audience a reason as to why. And, sadly, Hollywood often decides to make them so different from the clan they work for that there is no possible way they could ever be accepted as family.

Take Dorota, rich girl Blair's maid on Gossip Girl. While fans adored the Eastern European character, we never viewed posh New York City from her perspective. Blair, an Upper East Side Princess with a mean streak, was our (flawed) heroine, and Dorota was the woman who made her bed and occasionally acted as a shoulder to cry on. In many ways, Dorota's accent and "otherness" was what put Dorota in her place as a maid. Her heritage was often the butt of many jokes. She was a device used by Blair to forward her own rise to power. She was a pawn. And — at least, in the first few seasons of the show — she didn't really feel like a complete person. And that's only scripted TV — Jeff Lewis' aforementioned maid on the home improvement reality show Flipping Out is Latina, with her race being played for laughs.

The one thing it seems that we can appreciate about Devious Maids is that while the maids featured are Latina, it's their bosses' snobby attitude towards them — rather than, say, their accents — that will be getting the most laughs. The maids on the show are slated to be the heroines; their white bosses, corrupt, selfish, greedy and ignorant.

Critics are right that having a Latina maid on a show plays into stereotypes, but there's a silver lining: Devious Maids' characters aren't background roles on the show. The maids are the stars. It's doubtful Longoria would ever let her show be a product of narrow-minded stereotypes, which is why there's hope that Devious Maids won't be a show about Latina women staying mum while they clean the homes of the rich white people. Devious Maids' cast may be Latina, and they may be maids, but they are also mothers, friends, and lovers — strong, smart women who aren't defined by their jobs.

More like this
What’s New On Netflix: A Victoria Justice Rom-Com & The Return Of David Letterman
By Arya Roshanian
What’s New On Netflix: The Return Of 'Bling Empire' & A Rebel Wilson Comedy
By Arya Roshanian
The True Story Of Candy Montgomery From Hulu’s True Crime Series
By Radhika Menon
Pete Davidson Mentioned Kanye West & Ariana Grande In His Last 'SNL' Sketch
By Grace Wehniainen
Get Even More From Bustle — Sign Up For The Newsletter