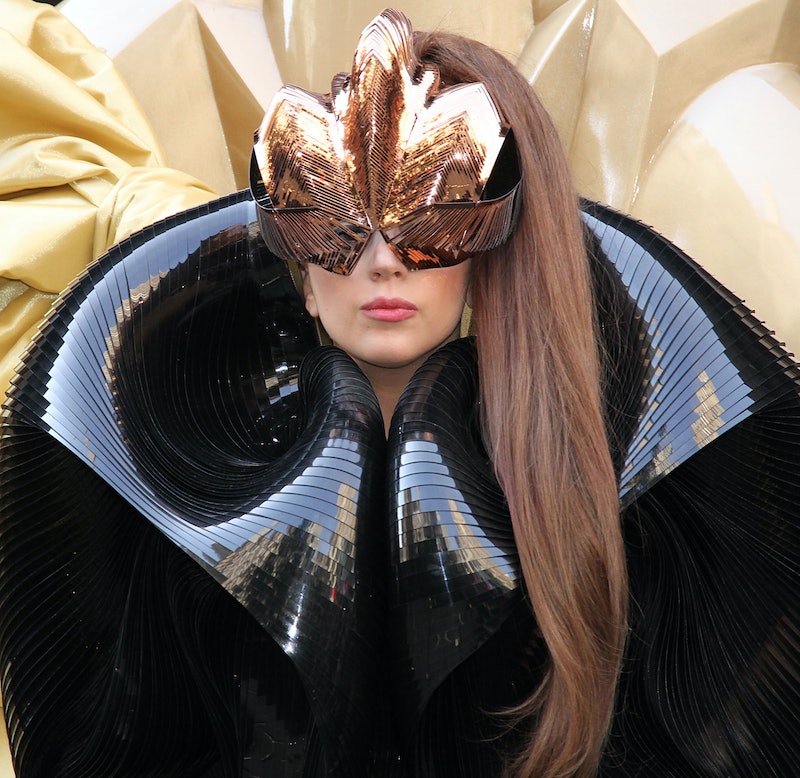 Lady Gaga's interview with Andy Cohen for winning Glamour magazine's "Woman of the Year" title offers a pretty revealing look at the high-profile pop artist — she discusses her body insecurities, her struggle with eating disorders, even the "Born This Way" vs. "Express Yourself" feud. But the most interesting perspective Gaga had to offer was how little she relates her physical appearance to herself as an artist and a person. One of her best quotes in the article is, "I reject the idea that I have to take all [the costumes and makeup] off to be f--king authentic."

But as women, we're constantly evaluated as a person based on our physical appearances. And for female pop stars like Gaga, that's even more true. In the Glamour article, Gaga says she'd like to be remembered for her work with her Born This Way Foundation (which is doubtful, but a nice PR move on her part), but realistically, Lady Gaga won't be remembered for her charity work, or even for her music. She'll exist in the public consciousness as an outlandishly dressing celebrity. She won't be remembered as a pop singer as much as the girl who wore the meat dress.

Think of how these women exist in popular culture: the cone bra, the cupcake bra, the schoolgirl uniform, the teddy bear leotard. These images instantly recall pop singers, even more so than the titles of their songs. People who've never even heard "Like a Virgin" can know who Madonna is simply because of how controversial her look was. And it hasn't changed, even today. People spend weeks discussing whether how a pop diva conformed to societal expectations of how a woman should look does or doesn't make her a good role model — not her lyrics or what she stands for, but how she looks.

Because for all the controversy over how a female pop star should look, it's really nothing more than a product of the masses. These women and the teams that handle them know that conventional expressions of sexuality are what helps make their music onto top 40 radio.

Whether Gaga should be taken as seriously as an artist is questionable but as a pop musician, she's challenging because more often than not, she subverts societal expectations of what a woman should look like. For every shell bra-and-thong combo, there's an outfit where she covers herself up in Kermit the Frog doll heads or red leather.

Lady Gaga may not like the frequent comparisons to Madonna, but they occupy the same space in pop culture. They're not women who made a huge impact on how music sounds, either today or in the future. But they both challenged how the public perceives women — Madonna by taking charge over her sexuality, and Lady Gaga by subverting public expectations of her sexuality.

The current state of the mainstream music industry is such that even conventionally beautiful women like Gaga can be made to feel insecure because of how they look. But the more women like her who continue to push the envelope, the less it will matter when women don't fit the default template for what a pop star should look like.