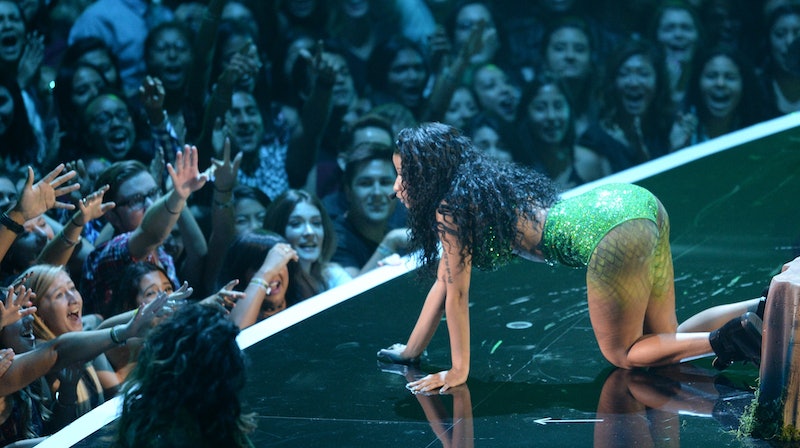 In a franchise crossover the likes of which hasn't been seen since Alien vs. Predator, the Syfy channel will premiere its Lake Placid vs. Anaconda on April 25. Now, I'm going to go out on a limb and say that you won't need to have seen Lake Placid or Anaconda to appreciate the cheesy goodness of the crossover. But, since '90s nostalgia is in full force, it might be nice to take a trip down memory lane anyway. So, just what happened in Anaconda?

First, you have to get yourself into the right frame of mind. Think way, way back to the year 1997. The Hale-Bopp comet fascinated astronomers and stirred up doomsday predictions. "I Want You" by Savage Garden was tearing up the Billboard chart. Moviegoers were patiently waiting for the big summer movies of Men in Black and Jurassic Park: The Lost World (and Titanic wouldn't follow until that Christmas). Until audiences could be pacified by gigantic dinosaurs and larger-than-life special effects and boat crashes, they had to be satisfied with just a big ol' snake. Enter Anaconda.

Now that you're in the right frame of mind, let's recall what happened in the rest of the movie. This should go without saying, but there are spoilers for the movie below.

Let's Get This Out Of The Way Off the Bat: There's No Nicki Minaj

I didn't want you to be disappointed. This isn't that "Anaconda."

First, They Assembled a Crazy Cast

There's a very small window where it would make any sense at all for an Oscar winner like Jon Voight, an acclaimed character actor like Eric Stoltz, and pre-height-of-fame Jennifer Lopez and Owen Wilson to all be in the same movie. Anaconda falls squarely into that window. Add in Ice Cube and and Danny Trejo, and that is one eclectic cast.

A film crew heads into the Amazon rainforest hoping to make a documentary about a reclusive indigenous tribe there. What could go wrong?

Just look at him. He can't be good news. He's hunting the legendary giant, 40-foot anaconda. He offers to guide the film crew to the tribe, presumably with fingers crossed behind his back. They agree, and instead he takes them into Snake Territory.

The Anaconda Starts Its Multi-Course Meal

What, did you expect that they'd find the tribe, make the documentary, and go home? Of course not. Instead, the snake starts picking off the crew members one by one, as a giant snake is wont to do in this type of movie.

One Snakebite Is The Craziest

If there's one thing to know about Anaconda, it's this: In its most famous scene, Sarone gets eaten by the snake — whole! — then gets coughed up again and is alive. (He does not make it to the end of the movie, though.)

J-Lo and Ice Cube Save The Day (Of Course)

Sarone, who was obsessed with hunting the snake, doesn't get to kill it. Cube does in an elaborate way that involves getting it caught in a chimney, setting it on fire, and eventually killing it with an axe.

Of course, they couldn't resist putting in a shot of an anaconda nest with a zillion anaconda babies. Hence the opening for sequels like Lake Placid Vs. Anaconda.