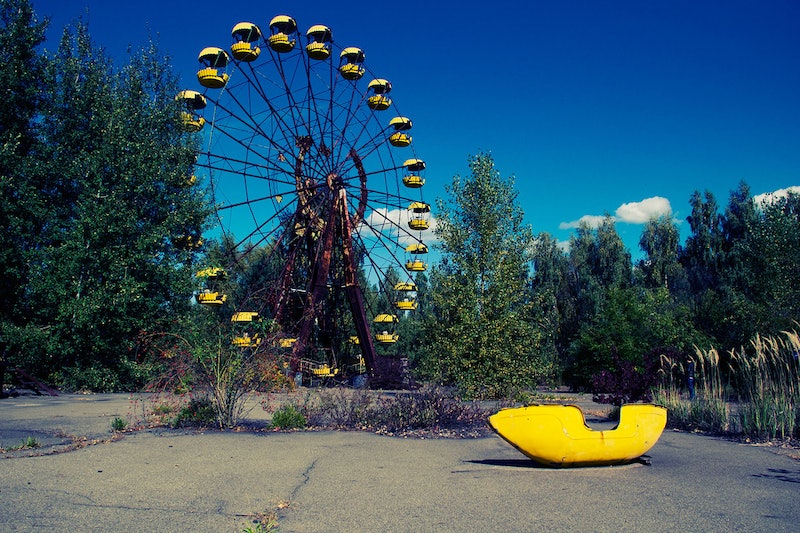 For two years now, mysterious videos of Pripyat, Ukraine — the site of the Chernobyl nuclear disaster — have been appearing on YouTube. This might not strike you as particularly unusual; after all, it's possible these days not only to visit Pripyat, but even to take a guided tour into it. But what makes these particular videos posted by a YouTuber going by the name Bionerd23 so unusual is how much she pushes the boundaries of what most would consider “safe”: She's gotten bitten by ants, she's run from rabid animals, and she's even eaten an apple grown in the Chernobyl Exclusion Zone. She's not exactly a YouTube star, nor does she appear to have any interest in being one — but her videos are worth watching all the same. She wouldn't be making them if they weren't.

On April 26, 1986, a series of events that occurred during a standard systems test of the Chernobyl Nuclear Power Plant all came together to create one of the most catastrophic nuclear accidents in history. During the test, the steam to the turbines was shut off and the diesel generator was turned on; the goal was for the turbine generator to power the reactor's main circulating pumps as they wound down, with the diesel generator picking up the slack with regards to the pumps' power needs as it turned on. The decreasing momentum of the turbine generator, however, also decreased the amount of power to the pumps — which lead to the creation of steam bubbles in the plant's water flow. The bubbles caused a power surge, which then initiated an emergency shutdown of the reactor — but instead of stopping the problem in its tracks, the shutdown triggered an explosion.

The radioactive fallout from the accident covered an enormous geographic area. Between the years of 1986 and 2000, more than 350,000 people were evacuated; we're still evaluating the long-term effects of the whole thing. You can visit now, but tours are strictly regulated by the government.

Even so, though, many still venture into the area unguided — like Bionerd23. Her videos typically focus on Pripyat's residual radiation: What's going on the ground, how high the readings are, what the ecosystem is like, and more. She very rarely dons protective gear, and when she does actually put on a pair of gloves or what have you, she takes a moment to explain why. Generally, her response to those who ask her why she takes such risk is a Marie Curie quote: "Nothing in life is to be feared, it is only to be understood.” It's kind of hard not to bring up the fact that Marie Curie eventually died due to the radiation exposure she dealt with in her work... but without that work, we wouldn't know half the things we know about radioactivity today. And perhaps that's Bionerd23's point.

We know almost nothing about who she is, though; Atlas Obscura recently got in touch with her via email, and all they know is that she “might be German, or, at least, has spent a great [deal] of time in Berlin,” and that “she is a student, probably, though of what and where, I don't know.” The lack of information is intentional on her part: “I don't talk about that, because my person is entirely unimportant,” she wrote. “Nobody should adore a scientist, one should adore his or her work.”

But although her excursions initial began for the purposes of research, over time, they've morphed into something else. “At first, it was just about the radiation, the contamination, measuring what is going on,” she wrote to Atlas Obscura. “By now, it's a love for the place.” She continued, “If you've been there and experienced the Zone as it truly is — a time capsule — you will understand. Time stopped the moment the reactor blew, and I don't just mean the readings on the clocks… And if you embrace it, you can understand the Zone's true meaning.”

And you know what? I kind of get it. That “time capsule” quality is the same reason people still visit Pompei, too. I've never been to Pripyat, but I've researched it on and off over the years, purely because I find it so intriguing. My fascination with with the place is even more than just the “stopped time” element, though (although that, too, has its draws). For me, it's about how the land recovers from a human-made disaster — and what happens to a place after people leave it and nature starts to reclaim itself.

One of Bionerd23's more recent videos — one that was posted about a week ago — deals not with the science of the area surrounding Chernobyl, but with the ghost town of Pripyat itself. Although I might be in the minority of Bionerd23's watchers, this one is actually my favorite one. Yes, it might consist mostly of the “tourist-y” sites… but the images are truly arresting. The lonely Ferris wheel, which was the centerpiece for an amusement park that only operated for one day before evacuation began, always hits me right in the feels.

Watch more of Bionerd23's videos at her YouTube channel, and check out Flickr for an amazing collection of photos of Pripyat.