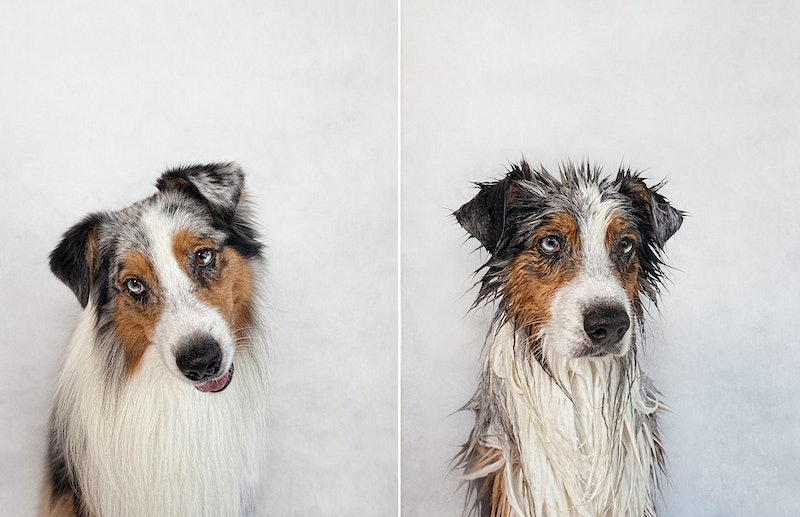 It's no news that furry friends of the canine variety have our hearts wrapped around their cuddly little paws. Inspired by the personality change the photographer saw in her own dogs when wet in the bath versus dry, Serena Hodson's dry Dog Wet Dog photo series ventured to document the human-like mood change in a series of 12 images. While some pups can't get enough of the bath, others aren't so jovial when exposed to the elements. From Australian Shepherds to Pomeranians, each picture is an adorable representation of the breed's personality.

Hodson herself is no stranger to animal portraits. She's made a name for herself at an international scale by capturing images of her dogs, Rocco and Ralph (RIP) since 2008. "I now have the pleasure of a British Bulldog and a French Bulldog called Simon & Garfunkel who are my absolute pride and joy," Hodson tells Bustle. "It's their personalities that inspire me every day." Though she initially started out as a graphic designer, her passion for dogs has catapulted her to puparazzi prominence. Take a look at the series below.

When you have a long day at work and round it out with thirsty Thursday.

When you get really bad news but you're cool.

"This just doesn't look like rose gold ombre to me, Jennifer."

When you get your brand new blow out wet.

"The results are whimsical and quirky pet photographs that subtly (and sometimes not so subtly) convey hints of hilarity, wistfulness, and humour, all combined to make you feel all fuzzy and all the more in love with dogs," Hodson says.

For more of this (because, yes) head over to Hodson's Facebook page.